Loop of discord: how did the “racist scandal” over the black racer from the USA end

The NASCAR series completed its own investigation into the hanging loop incident that was discovered in the boxing of the black pilot Babba Wallace. Auto racing organizers did not dispute the findings of the FBI, which stated that the rope was used to raise the door and was not intended to intimidate the athlete. At the same time, the leadership of the series noted that such ropes were not found in any other garage. 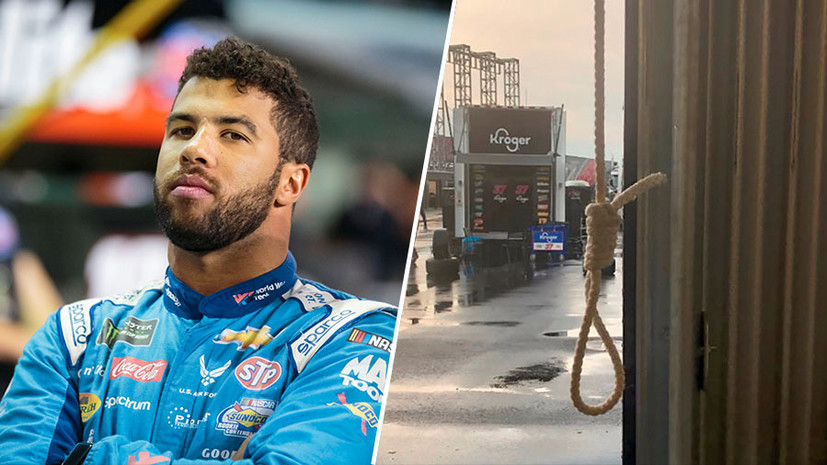 The American auto racing series NASCAR has completed an investigation into the incident that occurred with its only black pilot, Babba Wallace. Last week, in his boxing on the track in Alabama, a hanging loop was discovered, which is considered a reference to Lynch's court and is one of the symbols of racial intolerance.

The 26-year-old racer has recently become known as a black rights activist and member of the Black Lives Matter movement. After the death of George Floyd, he said that at the NASCAR races it is necessary to ban the display of the flag of the Confederation, which in modern American society is mainly associated with racism. Although all past attempts to abandon the flag popular in the south of the USA were unsuccessful, this time NASCAR agreed with Wallace and imposed a ban on its display.

Soon after, on June 21, a member of Wallace’s racing team discovered a hanging loop in his box on the Talladega track. NASCAR immediately condemned the possible manifestation of racism in relation to the pilot and said that they would seek the complete expulsion from sports of all those who were involved in the incident. To investigate a possible threat to Wallace, FBI specialists were involved.

The rider himself called the incident "a vile manifestation of racism and hatred" and noted that he was not going to give up his views. Other pilots supported their colleague and the next day, on which the race was postponed due to bad weather, they all accompanied Wallace's car on the way out of the boxes in solidarity with him. Also, a huge inscription “I support Babba” was laid out on the lawn of the track.

Meanwhile, two days later, law enforcement agencies completed the audit and announced that they had not found any signs of corpus delicti on the basis of racial hatred.

The FBI said that the detected rope was intended to raise the garage doors and was installed no later than last October, when the previous NASCAR race took place on this track. The noose hung even before the pilots arrived in Talladega to participate in the race and got garages at their disposal. The FBI felt that Wallace was not the target of attackers, and that what happened was not a manifestation of racism.

The rider himself admitted that he was relieved when he found out that there was no malicious intent in this case.

“I understood that there would be negative feedback - people already call me a“ deceiver ”and so on. It became clear that the “loop” was there for a long time, and that’s good - nothing was directed against me or my family, ”the athlete said on The Daily Show with Trevor Noah.

Such an outcome of the investigation really provoked criticism of Wallace. In social networks, the pilot was accused of the fact that the whole story with the noose was invented in order to attract attention.

After that, NASCAR demonstrated the very same rope to remove questions about its very existence. After conducting its own investigation, the series also did not dispute the conclusions of the FBI that Wallace was not subjected to racist attacks.

The head of the series, Steve Phelps showed a photograph of the rope and said that no other similar loop was found on any other track.

“Having learned about the loop and seeing it, we first thought about how to protect our rider. We live in a very stressful and emotional time. What we saw was a symbol of hatred and was found in only one garage - Babba Wallace's garage. I should have used the word “supposedly” in my initial statement. As you can see from the photo, the loop was real, as was our concern for Babba. Experiencing the same feelings, many in our industry and our media have defended the NASCAR family, because they are also part of it. We are proud that so many people support what is right, ”said Phelps.

The head of NASCAR said that he would no longer allow such an incident in the future and would make efforts to make every rider feel safe.

We add that in the midst of the scandal, social network users also noticed that Mike Falp, the owner of one of the highways in North Carolina, began selling ropes called “Ropes for Babba” on the Facebook trading platform. This ad caused a storm of indignation in the comments on the product and was soon removed.