On the 4th, the China Basketball Association announced that the CBA league will restart on June 20. After being shut down for more than four months due to the epidemic, CBA has become one of the earliest batch of professional leagues in China. The reasons behind it are worth considering. China Basketball Association official micro announced the CBA semi-finals.   The closure of the CBA stems ... 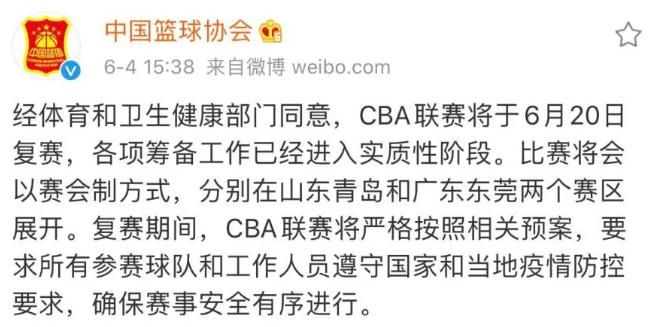 On the 4th, the China Basketball Association announced that the CBA league will restart on June 20. After being shut down for more than four months due to the epidemic, CBA has become one of the earliest batch of professional leagues in China. The reasons behind it are worth considering.

The closure of the CBA stems from the spread of the new national pneumonia outbreak around the Spring Festival holiday. On January 24, the league officially announced that due to the impact of the new crown epidemic, all events originally scheduled for February 1 were postponed.

After the rematch of the CBA League, it will be played in the form of a match-making system. The 20 teams in the first stage will be divided into two groups to compete in Qingdao and Dongguan. The games played are all from the 31st round of the regular season to Rounds and supplements included in round 46. In the first stage of the rematch, each team will participate in 7-8 games.

The specific grouping of the first stage of the semi-finals is as follows :

Data map: On December 15, 2019, Thompson (Bai), a player of Beijing Holdings, attacked in the game. On the same day, in the 17th round of the Chinese Men's Basketball Professional League (CBA) regular season in the 2019-2020 season, Beijing Holdings won 126 to 111 at home against the Guangdong Bank of Dongguan team. China News Agency reporter Han Haidan

Under such circumstances, the foreign aid policy after the restart of the CBA has always been a matter of great concern to fans.

To put it simply, teams that have not returned from foreign aid can obtain the "treatment" of the Bayi team in the original league upon application. The same rule applies to some teams with missing foreign aid. On the premise of giving up the qualification to use foreign aid, these teams can exchange for the protection of the "All-China Class Rules".

As for the new system and rules, whether the fairness of the league can be guaranteed and whether there will be disputes still need to be tested in the game.

After the CBA officials announced the rematch, Yao Ming, chairman of the Chinese Basketball Association, briefly introduced the anti-epidemic measures in an interview. "Where should you wear a mask, where do you need to take your temperature, where is the green zone, where is the yellow zone, and what kind of people are on what occasions, we all need to have a plan to make. We hope these are traceable and can copy."

In the beginning of May, Yao Ming thanked Academician Zhong Nanshan in an interview. "I am very fortunate to have his help. I have recommended experts to participate in the guarantee program of our entire competition and gave us many professional opinions. This is very important for our league. needs."

Data map: On February 27, the Guangzhou Municipal People’s Government Information Office held a special epidemic prevention and control news conference in Guangzhou. Academician Zhong Nanshan of the Chinese Academy of Engineering said at the news briefing that the new coronary pneumonia epidemic in late April can be controlled in China and can be restored jobs. However, overseas conditions, especially in developing countries and regions, cannot be prejudged whether the epidemic has spread. China News Agency reporter Chen Jimin

In the announcement of the rematch, the Basketball Association also stated that during the rematch, the CBA league will strictly follow the relevant preplans and require all participating teams and staff to comply with national and local epidemic prevention and control requirements.

According to media reports, CBA requires that all players must complete three nucleic acid tests, and the results can be qualified only if there are no problems.

At present, in order to successfully restart the game, CBA has indeed made great efforts in epidemic prevention.

Working together to prepare for the rematch

The road of CBA's restart can be described as twists and turns. In the beginning of February, media broke the news that CBA has informed the teams that the league restart time is not earlier than April 1.

With the passage of time, there are more and more rumors that the CBA will resume the game in April, and even some rumors are specific to a certain day, but in the end, whether in April or May, the CBA failed to restart smoothly.

While fans are eagerly anticipating, CBA is also making continuous efforts. In an interview, Yao Ming once introduced that the original CBA league had three restart options: intact, slightly cut the schedule or directly enter the final stage.

During this period of hard work for the rematch, it was a bit tough for CBA and various clubs. While anxiously discussing and waiting, they still continue to pay for the operation and management expenses of the team and the league, and are under great financial pressure.

How to overcome the difficulties? There is only the word "unity". In mid-April, CBA announced a salary cut for middle and senior executives, including a 35% salary cut for CEOs and 15%-30% salary cuts for directors and above. All members of the Beijing Control Club also initiated a salary reduction initiative to deal with the severe challenges facing the club.

During the lockout, the CBA teams did not stop preparing for the game, and the players were still preparing for the rematch. For example, Hu Mingxuan, a slightly slender Cantonese teenager in the past, has become significantly stronger in the recent video released by the team.

On April 8, the CBA alliance signed a copyright agreement with the cooperative enterprise for the next 5 years, and will continue to promote the concept of "5G + sports". Some media reported that the contract was huge. The sponsor's trust in CBA has undoubtedly injected a stimulant into the restart of the league.

Being able to take the lead in restarting most domestic competitions is inseparable from the joint efforts of relevant CBA stakeholders. After the CBA announced the rematch, Yao Ming also promised in an interview that he would do his best to "serve" all parties.

"We will try our best to arrange some relaxation activities for athletes, from the rhythm of the game to the spare time... Our work is to make the game proceed normally, and we hope to provide players, coaches, tournament organizers, team personnel, including the news media To provide as much convenience as possible." Yao Ming said.

Can it become a model player in the rematch?

There were rumors that the Super League and the CBA restart plan were submitted to the higher authorities for review together, but this statement has not been officially confirmed. Fans are always in a state of fog in the restart of the Super League.

Only one week later, CBA announced the restart. Does this mean that other professional leagues in China are not far from restarting? Since each project has different situations in terms of rematch blueprints, venue requirements, and the range of groups involved, this question may not be able to get an exact answer for the time being. However, the CBA after the rematch is likely to become the object of reference and learning for other domestic leagues and even some foreign leagues.

There is no shortage of preparations, but it is hard to predict how effective the CBA will be after the rematch. Anti-epidemic measures are in place, which is not equivalent to completely zero risk, and whether the change of the system can guarantee the fairness of the game, it must also be marked with a question mark.

In the past, the basketball game of the tournament system rarely occurred in such a large-scale, long-term period. Therefore, the CBA rematch put forward higher requirements for the organization of the event. And a large number of teams suddenly gathered in an area, also need the coordination of multiple local departments.

The rematch of CBA is an important symbol of Chinese professional sports re-starting after the epidemic, but it is still unknown how many storms will be encountered after the voyage.

It is often said that everything is difficult at first. But the other sentence is very good: there is no difficulty in the world, I am afraid of the caring people. I believe that the first step taken by CBA can be rock-solid and sound. (Author Wang Hao)