The stars of the future: in Moscow there was a tournament UTLC Cup among youth football teams

Youth football teams from eight countries took part in the UTLC Cup tournament, which has been held for the second year in Moscow. Russia was represented by pupils of the capital's Lokomotiv. The winner of the competition was the Czech "Sparta", who defeated the Japanese "Yokohama Marinos" in the finals. Matches of the tournament were held at the RZD Arena, where the organizers arranged a real family holiday for the fans. 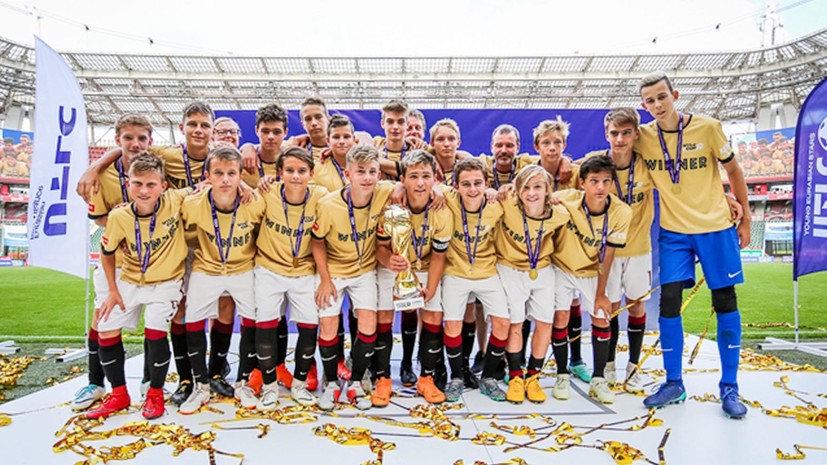 For many Russians, the World Cup was the most memorable event of this summer. But a month has passed after the final match between the teams of France and Croatia, and the most dedicated football fans have a question: what next? How can we make this holiday continue so that the national team continues to please, and the fans are still eager to fill the stadiums? After all, no matter how loud the effect of the World Cup can be, one day it will come to naught if everything is allowed to go wild.

The answer is simple - everyone who is involved in football, you need to continue to develop it, taking advantage of a wonderful moment for this. And to start best with children. His contribution to this business was made by the current champion of the country on football "Locomotive". A month after the end of the World Cup, the club organized on its "RZD Arena" UTLC Cup tournament for youth teams from all over the world - pupils of the Italian "Roma", German "Hamburg", Czech "Sparta", Kazakhstan "Astana", Belarusian BATE , the Chinese "Zhejiang Greentown" and the Japanese "Yokohama Marinos".

This is not the first time that the stadium in Cherkizovo opens its doors to the younger generation of football players. The debut UTLC Cup took place a year ago, and then the hosts won the tournament. This time the railwaymen had more difficult - in the group stage they lost to "Sparta" and "Yokohama". A bit to raise the mood was succeeded by the defeat of BATE with a score 11: 0, but the fight for the championship cup was completed by that time. Consoling themselves, the players of the "Locomotive" could be that they lost to the future finalists of the tournament.

It's one thing to educate new players, but it's quite another to attract spectators to their game. In "Locomotive" this was not forgotten, and the decisive match UTLC Cup was accompanied by a wonderful family holiday in the stadium. At the entrance to the arena, one might get the impression that senior railroaders have an important match, but no - on that day they played in Samara with the "Wings of the Soviets."

Than only the young fans and their parents occupied themselves in anticipation of the finale: "Locomotive" organized for them an aquapark, a foam party, a rodeo with a riding on a mechanical bull, a camel ride and a field for battles on water pistols. A lot of sites were devoted to sports - everyone could test their strength in streetball, rugby, table tennis, climbing, boxing and passing obstacle course.

Of course, the most popular attraction was football, and it was presented in two variations - to drive the ball could be in the usual "box" and in the pool with water. In a small field, where football passions boiled, two twins immediately attracted attention. Although the association with Miranchukov begging by itself, one boy preferred to stand in the gate, and the other - to attack others.

"We are called Igor and Vlad. We love football and support the "Locomotive". We really like it here, we want to become football players, "the guys in their first interview almost chorus and confused.

In different ways they answered only one question - about their favorite football player. Igor called Artem Dzyuba, and Vlad - Igor Akinfeev. Usually twins play on some positions and their players become one of the same plan, and these guys in the future may have an atypical for football duo of the goalkeeper and the attacker.

Another young fan Yaroslav came to the stadium not for the sake of attractions, but for the match of his beloved Lokomotiv.

"I'm 11 years old, and all this time I'm rooting for Lokomotiv. It's a friendly atmosphere, very nice, spacious, so we came here with the whole family. Most of all I want to look at the match "Locomotive", although I do not know with whom he is playing today. I also want to do football and someday play at such a tournament, "Yaroslav said.

To upset the boy did not want to - by that time, "Locomotive" has already beaten BATE in the match for fifth place with a more modest score 3: 0. To see football on "RZD Arena" was possible only with the participation of UTLC Cup finalists - "Sparta" and "Yokohama Marinos".

The decisive match took place with all the main attributes of football - 13-year-old players were taken out of the locker rooms by younger guys, before the starting whistle in their honor national anthems were played, and it was necessary to play on the whole field of "RZD Arena". Is that the halves were reduced to 30 minutes. The parents of the players and the fans occupied the whole central podium.

In the fifth in five days, the young players were hard - they let themselves know about themselves the fatigue and heat of the last summer days. Throughout the whole hour of the game there were no goals. Only in the compensated time "Sparta" held the final assault, and he gave the result. Daniel Mihl scored the winning goal and made a flip for joy. To congratulate him, even the goalkeeper of the Czech team reached the corner of someone else's corner.

Japanese footballers were so upset that they hardly found the strength to take silver medals from the hands of former Russian national team players Ruslan Pimenov and Dmitry Sennikov. And the enthusiasm of the guys from Prague was unlimited, when the chairman of the OTLK Alexei Grom handed them the winning cup - seemingly even more impressive than the main trophy of the world championships.