The dramatic events of the afternoon aroused both concern and interest in the Herttoniemenranta neighborhood. 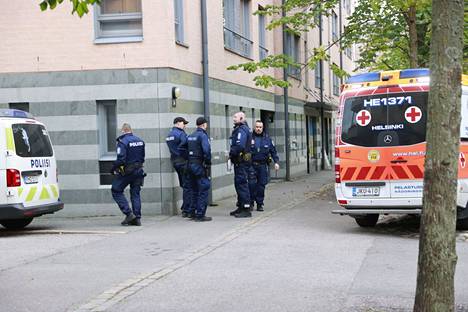 Police arrested a person suspected of being armed in a private apartment in Herttoniemenranta, Helsinki, on Thursday afternoon.

According to the police, the arrest went calmly.

Police told outsiders after 4pm that the situation was over, but there were still several police units left at the scene.

The rest of the police also left the scene at about 5 p.m.

The events of the afternoon aroused both concern and interest in the neighborhood.

A couple living in the house opposite said they had seen a group of police bears on the scene.

- He didn't have a gun in his hand, but he had a helmet with binoculars.

He looked more like a soldier than a police officer.

In addition to the police units, there was one ambulance on site in the afternoon.

Mari, 81, who lives in a neighboring crab, says she was shocked by the incident.

- The police stopped all the traffic, and of course I was curious to try to follow the situation from the balcony until we were told to go indoors.

- I have lived here happily for 17 and a half years, it has been wonderful, but unfortunately the neighbors are changing.

Sometimes then comes these disappointments today.

Of particular concern in the situation was the location of a kindergarten close to the scene.

Children will usually be picked up after 4pm.

The police drone hovering near the balcony also aroused astonishment.

- The drone was at first two meters away from me, I wondered what it was spinning in it.

As I followed the situation, I saw that there was a huge one above the sea as well.

The situation was resolved this time with fright.

- I thought this was really exciting.

I’m 81, something to keep in life even happens during a pandemic.

Before five o'clock, the Helsinki Police Command Center told IS that it was not yet known whether the arrested person was in possession of the right weapon.

The name of the suspected crime depends at least on what kind of weapon it was.

Police also did not tell in detail about the arrest or the events that led to the arrest.

The police will inform more about the events as new ones emerge.