Ulla Appelsin's comment: Minister Ohisalo, what if we get hungry?

The epidemics did not disappear from the world, and the military crises did not end. Dear Finnish decision-makers, what if the next crisis concerns food, asks Ulla Appels, Editor-in-Chief of Ilta-Sanomat. 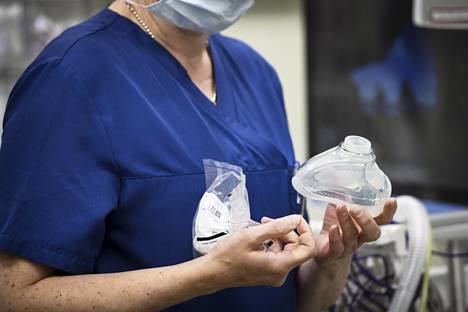 In his super-popular book “Homo Deus,” Israeli historian Yuval Noah Harari presented how well humanity has succeeded in its fight against epidemics. Smallpox was riveted and the frightening threats of modern times from sars to ebola have claimed relatively few casualties. Harari stunned those who fear that “some cousin of the black death is waiting around the corner” and in his 2015 work came to a clear conclusion himself: “Epidemics are now a much smaller threat to human health than in the previous millennium.”

After all, now we know how it went - just a few years after the publication of Harar's book.

Those evil-airbirds who predicted that return of the “black cousin of death” were right in their tism and Harari was wrong in their optimism.

Korona has so far killed well over four million people, some estimates put it as high as 7 million, and brought our entire modern 21st century world to its knees in a way we could not have even thought of in our wildest imaginations.

Korona has killed millions of people.

Harari is a learned man. But no matter how learned, no one can predict with certainty the future. Therefore, the wise prepare for everything. No matter how it feels, the world has finally changed and the ancient crises are a life left behind. They are not.

It has been seen in the neighborhood as well.

Do you remember the atmosphere after the collapse of the Soviet Union?

Wars and dangers in and around Europe had to end there, and Russia was thought to be moving about just towards open democracy.

In some European countries, there was an oblique smile on old-fashioned and frozen Finland, who persevered with the general conscription and did not go down in any way.

Sweden, for example, put its own general conscription on ice for peace in 2010. There was enough domestic criticism: there were politicians in Finland who thought that former security threats no longer existed.

In Finland, general conscription has been taken care of.

But then came the green men and the Crimea and the crisis in Ukraine and so on.

Finland's choices were no longer barked, instead Sweden began to re-equip Gotland in a panic, and in 2017 it was decided to restore conscription in the western neighborhood.

However, it has not been quite easy once the system has been scrapped once.

And this is the essential thing: can we in Finland prepare for future threats?

Do we understand that if something is driven down now, it may not be so easy to lift it back upright?

We have now learned that communicable diseases and military threats have not disappeared from our world.

But do Finnish decision-makers think of this threat: what if we starve?

Worry about not. A recent example of this is Minister of the Interior Maria Ohisalo (green), who raised sticky Finnish agriculture this week on Yle and Twitter. Instead of using strong speeches in favor of Finnish self-sufficiency as Minister of the Interior - that is, Minister of Internal Security - he focused on blaming farmers for climate change. According to Ohisalo, many private individuals take care of their plots, but instead agriculture: those culprits can be found there. The Minister announced that agriculture has been “sidelined” in the fight against climate change.

Unfortunately, Ohisalo is not alone in his views.

In recent years, we have found a common way of talking about the countryside as almost a mere expense, a burden and a burden.

Recently, for example, Jussi Halla-aho (ps) aroused confusion with his views on “torture with a sticky subsidy policy” and the Coalition Party’s Sari Sarkomaa, on the other hand, has called Finnish agriculture on the outskirts of the Archipelago Sea a “special disgrace”.

Last year, Otso Kivekäs (green), the former chairman of the Helsinki Council, even appalledly called for a boycott of Finnish animal products and a change to Swedes: “If you want to buy cheese, buy even a Swedish one.

The Baltic Sea thanks ".

Farmers are experiencing climate change concretely on their own fields.

It seems that the heaviness and importance of the work of food producers is not realized. Those carrots, breads, cold cuts and yogurts don’t walk into the store on their own. Of course, climate change must be taken seriously in every sector, and it applies to agriculture, as it does to other sectors. But it is unfair to suggest that one profession is the main culprit, let alone that it somehow deliberately acted recklessly. Farmers, if any, will concretely experience climate change on their own fields. They experience more: many struggle for their livelihood on a daily basis. The work is binding and demanding, and even a holiday is just a utopia for many. If for some reason it is not possible to get an interleaver on a dairy farm, those cows cannot be left in their barn alone. The future also looks uncertain.Suddenly, in the name of climate change, huge sums should be invested in change or new technology just believing that through it that livelihood will one day come.

Finnish food production must be developed and emissions reduced, that is quite clear.

At the same time, however, the nail's teeth in Finland must hold on to the fact that we are guaranteed to continue to have people who produce that food for us.

It means that the countryside cannot be left alone with its distress and change.

And it also means that we need to show appreciation for food producers.

Food shortages may seem like a utopian idea in this abundant world where store shelves are swaying stuff.

But: so felt the deadly epidemic of the world.

During the corona, both masks and vaccines have been fought around the world.

What if next time we even fight for grain?

Do current decision-makers remember that Finland has experience of this in history?

During the horrific years of famine in the 1860s, the grain harvest was lost for two consecutive summers, and potatoes and roots rotted in the fields.

There was not enough help from abroad when there was trouble elsewhere as well.

Finnish infants walked the roads, desperately begging even a small loaf of bread for their iron.

During the war years, sugar was also on the card.

And here you don’t have to go to the 19th century. During the Second World War, there was a shortage of everything in Finland and coffee, sugar, bread, cereals, milk, cheese, meat and butter were regulated. In the difficult winter of 1942 even potatoes and roots. Even then, hunger plagued many homes. Contemporaries recall how they drank liters of coffee substitute boiled from dandelion roots and cocoa made from beets.

History should be learned. At least the fact that Finland cannot leave its food production to imports alone. And it’s not just about grains and vegetables. Regardless of whether a person eats meat or not, it is essential for Finland's security of supply that meat production is not run down by us. This was already realized during the famine years of the 19th century. After that, Finland also invested wisely in meat production from afar, which was not as weather-dependent as grain growing. What had been learned from the crisis was that where there were cows, dairy products could make up for the shortage of grain.

In fact, if meat is eaten in the world at all, Finland - like the other Nordic countries - is one of the best regions for producing it from a climate change perspective.

Take cattle, for example: we pop them in the grass, unlike in many other countries, where they are fed soy grown in fields cleared of rainforests.

In the global world economy, everything affects everything and a single thing, even a small one, can have dramatic consequences.

There has been a shortage of chicken, bacon, corn, several food products in the U.S. this year.

The corona crisis had an impact on this, of course, but also on the fact that a container ship happened to get stuck in the Suez Canal.

One only ship - and suddenly it is the result of chaos that is felt on the other side of the globe.

In the early stages of the corona crisis, food was hoarded in the shops.

A small taste of the consequences of panic was also obtained in Finland at the beginning of the corona crisis.

When people were worried about running out of products, not only toilet paper but also minced meat was hoarded.

The pools yawned in many shops, although the chains asserted that there was enough stuff.

During these two corona summers, Finns have traveled exceptionally much in Finland.

We have seen shimmering waters and lush meadows.

Swam in lakes and wandered in danger.

But how many have also noticed the abandoned houses, deserted barns and quiet villages of the countryside?

Do we understand that the countryside has more than aesthetic and nostalgia value for Finland?

That’s where our daily bread comes from.

At least for now.

Since the departure of Ohisalo, farmers have been able to read desperate comments from social media.

One dairy farm hostess seems to sum up the feelings of many of her colleagues on Twitter: "I can't stand being a food producer in this country anymore --- no one can always be just a problem."

What do we eat if they can’t stand it anymore?