Kalervo Kummola disappointed in Finland's success in Tokyo - download direct opinion on the culprits: "The biggest blow in Finnish sports"

According to Kalervo Kummola, Finnish sports should be modeled on the other Nordic countries - and in general where the best information is. 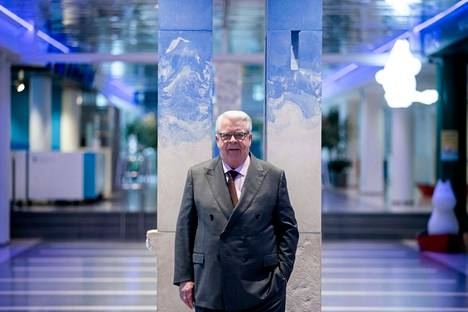 Kalervo Kummola, a strong man in Finnish sports, is in a divided mood after the Tokyo Olympics.

Until 2016, for a total of 23 years, Kummola, who served on the board of the Olympic Committee and chaired the delegation, felt that Finland's success was nowhere near what it should be.

But Kummola is not to blame for athletes.

Kummola knows that what has been sown years ago is now being mowed.

In 2010, the Humu Group began work on “reforming Finnish sports life” on the initiative of the then Minister of Culture and Sports, Stefan Wallin.

The group's vision was that Finland will be the best Nordic country in 2020, both in terms of results and the efficiency of the operating model.

The final report received in late 2012 has generally been described as being empty.

Kalervo Kummola is still annoyed by the failure of the work done by the Top Sports Change Task Force at the beginning of the last decade.

- I have been annoyed by Hum's thing for years.

It was the all-time blow of Finnish sports.

Five and between six people sat for two years developing all kinds of paper.

- We were now quite far from the level of other Nordic countries.

Sweden and Norway, on the other hand, proved that the Nordic people can still do in athletics, even running, Kummola says.

I, too, sometimes went to the Humu office.

There were different colored sticky notes on the walls full.

According to Kalervo Kummola, athletes should be supported more at the stage when they are just on their way to the top.

There were different colored sticky notes on the walls full.

I myself took them a similar report from New Zealand.

I don't know if they read it.

But New Zealand, about the same size as Finland, grabbed twenty medals (7–6–7) from Tokyo, Kummola points out.

In Finland, too, there have sometimes been discussions about focusing on certain species according to the New Zealand model, Kummola sees the opposite.

- We should also invest in these new extreme species.

For example, bmx cycling would probably be good for Finns when little boys ride around in the woods, Kummola thinks.

In general, Kummola wants to pay attention to the quality of coaching.

Mira Potkonen, 40, made Olympic history by winning a medal in two consecutive Olympic Games and being the oldest Olympic medalist of all time through boxing.

- Should send coaches to the best doctrine.

For example, in water sports, to New Zealand, and in general to where different sports thrive.

I have a feeling that not everyone in Finland knows what it takes to reach the top of the world, Kummola says.

- We have coaches for individual sports.

Short project contracts are made for coaches, even though coaching is a long-term process.

Even one Olympics is a short time.

Longer contracts have to be made, during which the coaches also have knowledge of the bread.

We have coaches of individual sports on the sidelines.

Longer contracts have to be made, during which the coaches also have knowledge of the bread.

Wilma Murto is an example of a young athlete going up strongly in her career.

Kummola talks about the same thing that Urheilulehti wrote extensively about last summer.

From the funds of Finnish sports to the “field”, only drops flow, and the coaches standing in line are waiting to see if they have anything to share.

- We forget that the athlete's support network is in the order of family, coach, club, sports federation, and then only the Olympic Committee.

There are no athletes on the Olympic Committee, Kummola says.

Read more: A paltry 1.5% of the € 151 million pot was enough for athletes - money sank in these places

According to Kummola, now would be a good time, once again, to think about the role of the Olympic Committee in Finnish sports.

After the London 2012 Olympics, sports group leaders became members of the Olympic Committee.

At the beginning of 2017, the Olympic Committee and the sports and sports organization Valo merged into one umbrella organization.

- This has been tried for nine years, and the achievements are not very special compared to the time before that.

Is it the right solution for the Olympic Committee to have sports leaders, or should the resources and money for the sport, those little pennies, be transferred to clubs and unions, Kummola asks.

- If the allocation of betting prizes goes new, it would be a good time to look at the matter again anyway, Kummola says.

According to Kalervo Kummola, Finland should also invest in newer, so-called extreme sports.

Antti Kurvinen, the Minister of Science and Culture responsible for sports, said in Ilta-Sanomat on Saturday that “from the beginning of 2024, Veikkaus' revenues should be transferred to the state budget”.

According to Kummola, Finnish sports need more money, and athletes and coaches should also get a decent share of them.

- An Olympic gold medalist could be paid 200,000 euros, and that would still be lower than for many countries.

And it is miserable that the ministry's money distributed through the Olympic Committee comes as a reward for success, but nothing comes of money when the athlete needs it the most, Kummola points out.

But where would this extra money for basic work in sport come from?

- It should be possible to acquire more sponsors.

Then you can find them when there are screens.

But the distribution of money should be changed so that it is invested in a talented athlete who does not yet have evidence, Kummola suggests.