Seven-fighter Maria Huntington no longer has to stress about money - “The better you play, the more it's always a plus”

Seven-fighter Maria Huntington believes she can set a Finnish record in Tokyo. Tokyo Maria Huntington will begin her tough career in the Olympics in Heptathlon on Wednesday. Matches are normally quite an effort for athletes, but the heat in Tokyo adds to their added challenge. The athlete of Tampereen Pyrinto has not always enjoyed the heat. At the summer 2018 Kaleva Games, he received some degree of sunburn symptoms. The last match before Tokyo ended with a break in Ratin 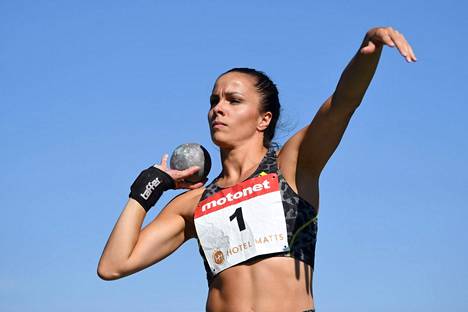 Maria Huntington will begin her tough career in the Olympics in Heptathlon on Wednesday.

Matches are normally quite an effort for athletes, but the heat in Tokyo adds to their added challenge.

The athlete of Tampereen Pyrinto has not always enjoyed the heat.

At the summer 2018 Kaleva Games, he received some degree of sunburn symptoms.

The last match before Tokyo ended with a break in Ratingen, Germany.

Coach Matti Liimatainen said at the time that the hot Opening Day was taxing forces.

However, Huntington says in Tokyo that the reason for the interruption was ultimately a viral disease that also raised a high fever.

The body goes into overdrive in the match anyway, and the heat makes it spin even harder, says a Tampere resident who admits to being a friend of cooler weather.

Bullet shooting is not one of Maria Huntington’s strongest sports.

He is aiming for a 13-meter arc in Tokyo.

Temperatures of up to 35 degrees are allowed for match days.

Unlike in Ratingen, Germany, athletes get cool between the sports in Tokyo and there are shadows on the field as well.

The biggest challenge is during the altitude race.

It usually lasts a long time and takes place in the morning, when the sun is already reindeering at almost full power.

Huntington plans to cool himself with a cold vest, especially during the altitude race.

- Care must be taken to ensure that the body does not overheat.

We now have a clear idea of ​​how we work, and I don’t see heat as a big problem.

The value races have not always ended happily for Huntington.

As many as four of the seven matches included in the youth championships have ended in suspension.

Most recently at the World Cup in Doha in 2019, Huntington’s contract ended in stomach ailment before the start of the second day of the race.

Huntington’s history proves how difficult it is to get a successful match together.

- It may be difficult to understand if you haven't fought yourself, he says.

Reaching the top points requires physical, technical and mental success in every sport without bumps and other worries.

- During the match is so mentally tired, it's a struggle.

I have learned a lot more about it over the last year.

During the competition, support at the stadium will be provided by long-term coach Matti Liimatainen and masseuse Pentti Niemi.

The story comes, the contestant laughs, referring to Liimatainen.

Huntington is a rare Finnish athlete because he can compete in Tokyo without worrying about his financial future.

He doesn’t have to succeed so that sponsors will continue to be available.

Huntington has got his finances in order after the 2019 World Cup in Doha, when ex-runner Noora Toivo took over as her manager.

Huntington, who appears on social media, is a self-sufficient athlete and is not dependent on scholarships, for example.

Of course, at the beginning of the year, he received 10,000 euros from the Ministry of Education and Culture, the second largest grant.

This kind of premise makes it easier to compete and prepare for it.

- Well yeah, the better you play sports, it's a plus for the financial side as well.

It’s also one of the motivators, Huntington says.

So what can a Tampere resident reach in Tokyo?

Huntington is 12th in world statistics this season and was 19th in the Olympic rankings.

He scored almost his record of 6,318 in May at Götzis.

- I don't want to speculate yet.

I can break the Finnish record, but it is the sum of so many factors.

Satu Ruotsalainen played in the current SE's 6,404 World Championships in 1991. The venue was Tokyo at the time, but the arena was different: the current National Stadium was built on the site of the then stadium.

Height, according to Maria Huntington, is a key sport throughout the match.

The schedule of the match has been made challenging.

The last sport of the first day of 200 meters is held in the evening for a quarter to nine.

It has the cornerstone of the match and they are tough points.

I hope I can feel my record in them.

After this, in front, is Huntington’s weak species of ball.

That’s what he wants in the 13-meter, and even the 200-meter should become the best pace of the season.

Afterwards, there is a quick meal, massage and a short night’s sleep ahead.

- Length is usually awkward when the first species of the second day is early.

You just have to get yourself awake.

It’s an eating tooth for me, it should get a hard result done.

Huntington has not yet gotten the best out of this season.

The record is just over a meter better.

There is usually a charge for the last species at 800 meters, if the species have done well so far.

Then a new Finnish record can also be seen in Tokyo.

In the fire spearmen, Lizzie Armanto and Sara Kuivisto

Read more: American boyfriend Daniel lifted Matilda Castren from the swamp - this is how the rise from Alko's box office to Olympic hope and the million series

Read more: Lizzie Armanto is the only woman who has succeeded in a completely endless loop trick - this is how she became Finland's great Olympic hope

Read more: Sara Kuivisto beat the SE momentum again - praised her racing sister: “It can be difficult for men to understand how proud I am of him”

Read more: Olympic verdict: Miracle Spikes talk about a UFO man after a miracle run - but would you be able to talk about Mira Potko?