In the documentary, politicians talk about their relationship with Veijo Baltzar - "Have I been a benevolent fool?"

Veijo Baltzar, accused of human trafficking and sexual crimes, was previously supported by many well-known politicians. It enabled Baltzar to rise to the top of cultural life and to an arbitrary position. 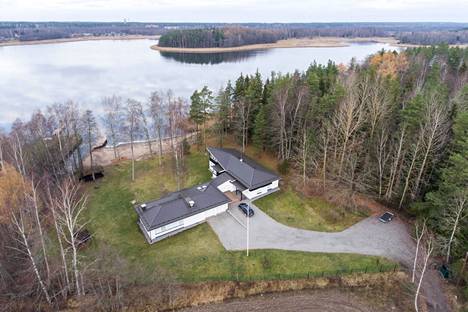 The career of author Veijo Baltzar came to an end on Tuesday, November 19, 2019, when police rumbled to his seaside house on Ekenäs in Raseborg and arrested him.

Just the day before, police had obtained permits to intercept and monitor Baltzar's telecommunications.

According to the story, for years, Baltzar had attracted girls and young women to its theater community, some of whom had moved to live in Baltzar’s home.

According to the newspaper, Baltzar had manipulated, controlled and approached the girls.

In Greek mythology, Dionysus is a wine god with charming female followers.

Following the completion of the criminal investigation, Baltzar was charged with human trafficking and sexual offenses.

Due to the nature of the crimes, the district courts were held in camera, without the public.

Judgment is expected no later than the end of the year.

The new documentary series Lahko tells about the background of the Baltzar case.

Ilta-Sanomat got to watch the first two episodes of the series in advance.

The episodes deal with Baltzar’s rise to the cultural elite and his relationship with well-known politicians.

Baltzar had supporters from various parties, but had the closest relationship with the SDP.

According to the documentary, the duo became acquainted in the army as early as the early 1960s when they were in the same room.

In the documentary, Lipponen commented on Baltzar in a letter.

- Baltzar is undoubtedly one of the most important Finnish cultural figures of our time and an internationally known promoter of Roma rights.

- Baltzar's work has a lasting significance regardless of other things, Lipponen writes.

- As for the current legal process, we must trust the Finnish judiciary.

Among other things, Lipponen was recommending that Baltzar be awarded the title of professor.

Baltzar did not become a professor, but a cultural adviser nonetheless.

The year was 2011. He was only the seventh person in Finnish history to receive that title.

At the time, of course, Baltzar was not yet suspected of these new crimes.

However, he already had convictions at the time for, among other things, breach of duty and attempted gross fraud.

The case of breach of duty is particularly interesting in the light of subsequent information.

Baltzar worked at the Theater Academy in 1997, and his job was to design a basic course in international acting, which he would also teach himself.

In that position, she and another employee of the Theater Academy approached young women.

The men made it clear that they could help get into the course and attracted women to Tampere for “basic information about acting”.

Even during the car ride, women’s suspicions arose as men’s stuff kept moving below the navel.

Baltzar and another man also stressed that in a working group like a theater group, women need to be consensual to everything.

At the latest in Tampere, men's intentions became clear when, in hotel arrangements, women were assumed to sleep in the same rooms as men.

Baltzar got nervous when this didn’t happen to women.

The women realized they had been scammed and returned to Helsinki.

After the matter became public, Baltzar received exit passes from the Theater Academy and the Court of Appeal for fines for breach of duty.

Baltzar was thus awarded the title of Cultural Counselor despite the noise and judgment of the Theater Academy.

The title of Baltzar was awarded by the President of the Republic Tarja Halonen.

Halonen says in the documentary that at that time more than five years had passed since the convictions, and they no longer appeared in the criminal record.

There were no known obstacles to the award of the title.

- The title was the unanimous proposal of the title committee.

It was chaired by Matti Vanhanen and initiated by people I know about social activism.

According to the documentary, the revelations about Baltzar's dark side shocked veteran politician Liisa Jaakonsaari in particular.

He was supporting Baltzar in 2015 as Baltzar ran for Parliament from the ranks of the Demar.

- Of course, it was difficult when there was no idea what was behind it.

It felt to myself that I had been a benevolent fool?

Have I been blue-eyed, says Jaakonsaari in the documentary.

The support of prominent politicians enabled Baltzar to rise to the top of cultural life.

Baltzar himself can also be heard in the documentary.

He vehemently denies the allegations and sees the matter more as being the victim himself.

- The heart says I'm not guilty.

As much as I have done for Finland, I still have the feeling that it is too hard a piece that the gypsy is at such a high level.

Baltzar is already an old man, next year 80 years old.

He says in the documentary he fears a prison sentence.

- I wouldn't want to die in prison.

I do not think it would be good for Finnish history to write to future generations that a national writer died in prison.

The four-part documentary series Lahko will start in the Ruutu + service on Monday, August 2.

Ruutu and Ilta-Sanomat belong to the same Sanoma Group.