Cold ribbon reveals: This is how Belarusian sports bosses “persuaded” an asylum-seeking sprinter - hinted at jumping off the balcony

An almost 20-minute audio tape has been published on the Internet to hear a conversation between Belarusian athletics bosses and Krystsina Tsimanouskaya in Tokyo before she was taken to the airport. The tape is torturous to listen to. 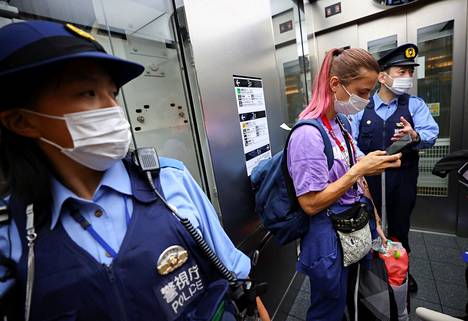 Anonymous Telegram channel Nik i Maik (Nick and Mike) has released an audio tape in an attempt to talk Belarusian sprinter Krystsina Tsimanouskaya around to fly home prematurely home from the Tokyo Olympics.

It is not known who recorded the tape and how it ended up in the public domain, but at least so far no one has tried to dispute its authenticity.

(Below is an audio tape of the conversation in Russian.)

The men say they have received a “top-down” order that Tsimanouskaya must return to Belarus after he had gone to publicly criticize the leadership of his country’s Olympic team.

What a silly girl, could have lived.

To whom did you witness something?

The controversy began when Tsimanouskaja had learned that the coaching staff had informed him in a 400-meter relay to patch up other athletes, even though he had never run a distance in competitions.

The need for patrons arose when the Belarussian sports management had not ensured in advance that all message runners had the required number of doping tests behind them.

Tsimanouskaja is largely silent during the conversation, but from time to time she responds to the men calmly and resolutely.

The further the conversation progresses, the more Tsimanouskaya's sobbing and crying noises begin to sound from the tape, but still he refuses to promise his persuaders that he will return to Belarus and remain silent about anything that has happened “in the interest of the team,” as the athletics bosses demand.

There came such a command: you are flying home today.

If you want to play sports in the future on the Belarusian team, listen to what is recommended for you: go home, go to your parents, anywhere.

Otherwise you will have to rumble more.

On the tape, Moisevitsh and Shumak repeat several times how Tsimanouskaya has done “nonsense” and how he must now return to his homeland in complete silence.

The men say they just want to help Tsimanouskaya and assure him that nothing bad will happen to him if he just agrees to obey humbly.

- There was such an order: you are flying home today.

If you want to play sports in the future on the Belarusian team, listen to what is recommended for you: go home, go to your parents, anywhere.

Otherwise you will have to rumble more.

Krystsina Tsimanouskaya with police at Haneda Airport in Tokyo on Sunday.

- Life is built that way, we do nonsense and you have done nonsense.

I hope you understand this, Shumak begins to persuade Tsimanouskaya.

In the meantime, Tsimanouskaja asks if the coaching leadership does not see that he himself has done anything wrong.

- You are guilty of the accusations and comments you have made.

Do you understand that you have accused people in front of the whole country before you have figured things out.

But you will be forgiven, we want to help you, Shumak continues to persuade.

But you will be forgiven, we want to help you.

At some point in the discussion, Shumak and Moisevitsh also begin to demand back from Tsimanouskaya his daily allowances, which had been paid to him in advance and which he would therefore no longer have earned.

Tsimanouskaya replies in the meantime that the sum is quite indifferent to him.

Men do not say who is the highest body to which they refer.

They thank Tsimanouskaya for understanding that he apologizes to the Minister of Sports.

Moisevitsh will begin to paint Tsimanouskaya next how, as a result of his speeches, cleansings could take place in the sports leadership of Belarus.

- The national team is cleaned so that the feathers fly.

And you will then go down in history so that this all started with Tsimanouskaya, he cooked the whole soup, there will be a change of leadership, a restoration of order.

Are you listening to me, one last time?

The national team is cleaned so that the feathers fly.

And you will then go down in history so that this all started with Tsimanouskaya, he cooked the whole soup, there will be a change of leadership, a restoration of order.

Are you listening to me, one last time?

According to Moisevich and Shumak, the leadership of the Belarusian Olympic team already has a plan in place to report Tsimanouskaya as injured, under which his departure could be explained in complete silence.

The top management calms down.

Things are moving forward and if God wills, there will be medals and all this will be forgotten.

But if you stay here against the will of (management), nothing good will follow.

For now this is considered a precedent that will interfere with the future performance of the entire team, Moisevitsh continues his explanation.

Running two hundred meters would give you nothing, nothing.

Now the only thing we can do is go the way that has been given to us.

You have to submit to how things have to go, the coach spins.

Not once during the debate is the name of the dictator of Belarus, President Alexander Lukashenko, mentioned, although obviously many expressions referring to senior management refer specifically to him.

In addition, the Lukashenko son, Viktor Lukashenko, chairs the Olympic Committee in Belarus, so the references are more broadly related to the entire Lukashenko dynasty.

During the discussion, Tsimanouskaja repeatedly reveals that she does not believe the men’s assurances and is not sure if she could continue playing sports after returning home.

- I know that you think someone wants evil or revenge on you, or that there are some political points.

But it’s nonsense, Shumak says at one point.

- No one is going to condemn or execute you.

We want to help you, Shumak assures.

Moisevitsh also assures that everything is going well.

We retreat in style on the basis of injury, and you travel home in peace.

I'm putting my head down as a pledge, Kristina, that you're fine, you hear?

We wiped out this incident.

Such is the will now, you see.

I have to humble myself.

In order to be saved, one must humble oneself.

Calm down, then everything will be fine, the coach persuades.

But if you stay here against the will of (management), nothing good will follow.

For now, this is seen as a precedent that will disrupt the entire team’s performance in the future.

In this context, the coldest point of the whole debate comes from the tape as Moisevitsh begins to speak of the Orthodox religion and the humiliation it requires.

Behind the metaphorical speeches is a direct hint that Tsimanouskaya could end his day by jumping from the balcony.

Krystsina Tsimanouskaya did not consent to the will of the country's sports leaders.

- Humility increases people. Be humble. Don't show your pride. Your pride tells you, "I don't agree, don't try." And it starts to take you on the occasion of the devil. It is in this way that people end their lives by suicide, unfortunately. The devil takes a grip on them and says, “Want to prove something to someone, jump off the balcony. Oh, then people grate their hair and regret that we drove him to that point. ” But do you know what is the most interesting? The people would then say, “What a silly girl, could have lived. To whom did you witness something? ”

From this, the coach smoothly moves on to lecture Tsimanouskaya on the victories of Russian military history from the time of Napoleon, because even then the victories have come thanks to wise leaders.

It is followed by praise for how Tsimanouskaya is a “wise girl” and how her situation is pathetic, but nothing helps, for she now only has to obey.

Moisevitsh also denies that he fears for his own future, but he claims to think for the best of all.

You can’t even comprehend because I haven’t even told you everything yet, Moisevitsh says.

The tape that ended up on the Internet ends when the men assume they have turned Tsimanouskaya’s head and everything is clear that this one is flying home.

- I haven't said I agree. If I did that now and returned home, do you think I would even want to continue playing sports anymore. I don’t want to prove anything to anyone, I just want to keep running, Tsimanouskaya says.