The coldness of Jamaica's sprinters to the Olympic-winning teammate amazed - expert: "Three athletes from the same country but different camps"

Jamaica grabbed a joyous triple victory in the women’s 100m race, but the faces of runners-up and runners-up did not shine with joy at the joint achievement. 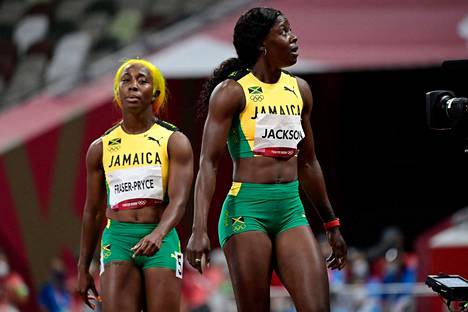 The 100m final of the Tokyo Olympics was a sovereign show for the Jamaicans.

Runners from the Caribbean island state grabbed a triple victory in the race.

In the TV pictures, however, attention was drawn to the fact that the trio did not seem to celebrate their achievement together very enthusiastically.

As winner Elaine Thompson-Herah celebrated her second Olympic gold in a row, runner-up Shelly-Ann Fraser-Pryce and trio Shericka Jackson stared in disappointment at the scoreboard.

After a while, the duo quickly went to pat the winner’s back, but quickly fell apart again into their own circumstances.

Lauri Hollo, IS's athletics expert, also noted that the duo left on the dimmer medals could not cover their disappointment and truly celebrate the winner.

- I did think about it after the race.

It’s hard, of course, to say more about their relationships when there’s no information, but they’re in different coaching groups right now.

Undeniably, there seemed to be a bit of a battle of hegemony, and then as a team, they couldn’t really rejoice in the winner’s performance.

While the other two took the medals, Hollo says.

The faces of Shelly-Ann Fraser-Pryce (left) and Shericka Jackson shone disappointing after the 100-meter final.

- Usually, if a triple victory is taken at the Olympics, then yes, together with the ticket, we will go on a round of honor.

There was a bit of a taste left that there were three athletes from the same country here, but they may not be exactly the same camp.

According to Hollo, a similar situation would hardly ever be seen if, for example, Finnish athletes took a triple victory in any sport.

- Even if it weren't in the best possible intervals, it would be celebrated in a completely different way.

For example, the Swedish duo Daniel Ståhl and Simon Pettersson, who grabbed a double-win puck throw, set a slightly different example of celebrating together.

The Swedes gave joint interviews and seemed genuinely happy about each other’s successes.

Daniel Ståhl and Simon Pettersson (left) rejoiced at each other’s success in this model.

- It was undeniably a little different.

But on the other hand, it went as might have been predicted at best.

At this hundred, things seemed to go the wrong way when their number one favorite, Fraser-Pryce, lost, Hollo points out.

- Would Ståhl have rejoiced in the same way if he had been second behind Pettersson?

Hard to say, he's such an awesome dude that he probably would.

Hollo understands Fraser-Pryce’s huge disappointment precisely because he was considered the biggest favorite in the race.

However, the job went wrong at an early stage, when the two-time 100-meter Olympic champion was unable to break away from Thompson-Herah during the start and acceleration.

- Departure and acceleration did not work quite as seen earlier this summer.

When he noticed in the middle of the race that Thompson-Herah was side by side, he probably knew he had lost.

Thompson-Herah comes in much better at the end, while Fraser-Pryce’s strength is a sharper output acceleration.

- When that beginning went wrong, the disappointment may have started to strike already during the trip.

The number one favorite, Fraser-Pryce (left), already noticed during the trip that the gold medal is about to escape.

Thompson-Herah, on the other hand, rejoiced and already showed the clock.

Comparing Jamaican runners to Finnish or Swedish athletes is a bit unfair in the sense that there are a huge number of runners and thus different camps in the giant country of sprinting.

- Jamaica and the United States on the fast track and Kenya on the sustainability side are countries that will inevitably generate clicks and confrontation.

There are only so many runners.

I keep stressing that I don’t know anything about Jamaican runners.

However, I don’t think they will become godparents of each other’s children, Hollo says.

Whatever the intervals then, Saturday’s show after Jamaica is a huge favorite for women in instant messaging.

If another team comes to the finish line first on Friday next week, it’s quite a surprise.