Olympic medalist Matti Mattsson returned to Finland from a tight corona bubble: “The hardest part was that all the hustle and bustle was so closed”

The new Olympic medalist was warmly received by relatives at Helsinki-Vantaa Airport. The swimmer, longing for his children, received his first congratulatory hug from his wife Maiju. 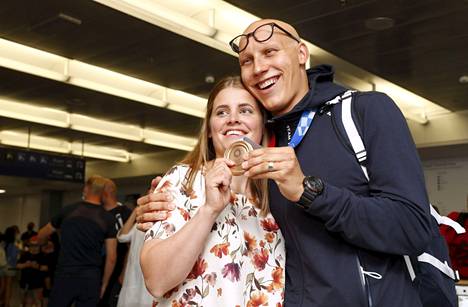 There was controlled chaos at Helsinki-Vantaa Airport on Friday afternoon when Olympic medalist Matti Mattsson, 27, returned home from Tokyo.

The Pori resident, who opened the 200-meter breaststroke of the Finnish medal account with his bronze, received loud applause from his relatives, representatives of the Olympic Committee and curious people who arrived in Arrivals Hall 2B.

The return flight began the medalist's descent into a more normal daily life.

- Yes, the hardest part for me personally was that all the hustle and bustle was so closed, Mattsson said, referring to Tokyo's strict corona restrictions.

Swimmers could not even walk or suck oxygen from their hotel room.

Staying in the same room for a longer period of time started to be challenging.

- Whenever Maiju called, I lay but in bed, when there was not even a sofa to sit on.

20 hours of lying down is pretty numbing for a couple of weeks, Mattsson said.

The star swimmer hoped to reach her children as soon as possible.

Mattsson waited to see his four-year-old Varpu daughter and seven-month-old Aarni son throughout the Games.

- This is a good place to go to summer pastures.

You can calm down a bit, cottage and boat, Mattsson, who swam the new Finnish record 2.07.13 in the Olympic finals, designed it.

Maiju Mattsson arrived in Helsinki-Vantaa together with coach Karvonen's wife.

- I'm looking forward to Matt getting back home, Maiju Mattsson said a moment before the plane landed.

The nightmare of the paramedic on maternity leave was low on medal night, and the morning was also quite a media spin for family members.

- Maybe it's been a lot of rotation in my head that what the man went to do there, Maiju Mattsson said.

The mother of the bronze medalist Päivi Koivu said at the airport that the boy's return home was deeply touched by an Olympic medal around his neck.

- Yes, this was actually the culmination, he said, adding that he had been in the background for the most attention.

However, congratulations have fallen wildly on both acquaintances and strangers.

- It feels really great to be in Mati's joy.

Matti Mattsson won the World Championship bronze medal in the 200-meter breaststroke in 2013. According to his mother, the jumping and annealing were visible for a while even then.

- Then, of course, there have been these moments of depression, and then of course I have encouraged him more, when that feedback was partly appropriate and, in my opinion, partly unjustified.

Coach Eetu Karvonen said that he did not sleep at all for the night after his medal.

- I watched Mati swim and think about how this has been achieved and on the other hand how we can get further from this, he said.

- Mat has certainly had an icy spin, and he has been on the phone with reporters for hours.

The phone was filled with messages, and if I got 20 interview requests, then Mati got 60-80.