Matti Mattsson got excited about swimming at the age of 7 and promised too much too early - after the difficulties, the medal tastes better than usual: “His wife has said that it is worth swimming”

Five years ago, Matti Mattsson would have liked to disappear underground and was about to end his career. Now he is already looking towards the 2024 Olympics in Paris. 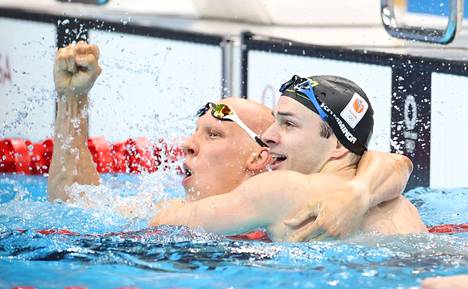 The recent Olympic bronze medalist Matti Mattsson wrote about his earliest swimming experiences on the Fitness for the People website in 2011.

- I started getting used to the life of a swimmer and the chlorine-scented swimming pool as a 7-year-old boy's prince.

As a junior, I got to participate in the various junior groups of the Swimming Association.

I was also in the fast-paced fins swimming in the Diving Association's training ring, 17-year-old Mattsson wrote.

- My goal is to get to the London Olympics in 2012, young Mattsson nailed.

Arno Kamminga from the Netherlands, who was swimming in silver, jumped into the joint venture with bronze medalist Matti Mattsson as soon as the results of the 200-meter breaststroke were confirmed.

By January 2011, he had already won his first adult World Championship gold on the short track, on his parade trip in the 200-meter breaststroke - a mute over five seconds difference to a silver medalist.

At that time, Mattsson announced that he would win the 2016 Olympic gold in Rio.

- Matti seemed to be mentally hanging on to that promise, and it became a very heavy burden to bear, Tomi Pystynen, who coached Mattsson at the time, told Ilta-Sanomat on Thursday.

When Mattsson won bronze in the Barcelona Long Track World Championships in 2013 in SE time 2.08.95, the road seemed to be open to the skies.

But the road was full of potholes.

The November 2013 Short Track European Championships went sideways when Mattsson crashed on a bike and had a hand surgery.

The following years' European Championships and World Championships (EM-10., MM-12.) Did not predict the fulfillment of the gold target.

“If there had been a hatch on the floor to dive in and get out of, I would have done it and I wouldn’t have returned,” he said at the time.

After dealing with the disappointment, Mattsson decided to continue his career - and fired Pystys.

When looking for a new coach, Mattsson remembered the Barcelona World Cup more than just his medal.

In Barcelona and at the World Championships camp, Mattsson had listened to the swimming philosophy of seven-year-old breast swimmer Eetu Karvonen and was confused by his database.

Maiju Mattsson played with Aarni's boy, who is about 8 months old, while the Varpu girl was sitting on the edge of a sandbox at a cottage in Luvi's family on Wednesday.

On New Year's Eve, Mattsson married Maiju, and Karvonen was involved in the wedding party.

As early as January 2, 2017, the cooperation between Mattsson and Karvonen officially started with basic fitness training.

It was Karvonen who paid attention to Mattsson's rapidly falling energy levels during the exercises.

Mattsson was diagnosed with celiac disease in 2019.

- Celiac disease was diagnosed years ago, but then it was not found.

Personally, I believed for many years that the problems were only due to hard training, Mattsson said in an interview with STT during the Tokyo Games.

Matti Mattsson was badly disappointed in Rio in 2016. According to his former coach, Mattsson was “hanged on to the promise” of Olympic gold.

Thanks to a diagnosis of celiac disease and a change in diet, Mattsson’s weight has dropped markedly, from as much as 113 pounds to the current 93 pounds.

At the turn of the year 2017–2018, Mattsson had contracted an autoimmune disease called alopecia, which made him completely hairless.

That’s why Mattsson stood out in the Olympic pool after being the only swimmer who didn’t wear a swimming cap.

Eetu Karvonen has been coaching Matti Mattsson since the beginning of 2017.

The duo photographed in April 2020 in the 17-meter pool of the Yyteri recreation hotel.

- If he hadn't come to Pori, I wouldn't have swum for many years, Mattsson said in Tokyo.

Faith has often been tested over the years.

- Quite often, ending a career has occurred to me.

Almost every value competition has had the feeling that this is really enough.

But there has always been a rise and go with a new rage towards the new year, Mattsson said at Yle about nine hours after his bronze swim.

But some Pori madness and self-development has still sprung from its own innermost being.

I’ve always told myself I haven’t been able to do my best, he continued.

Still, when Mattsson practiced in the 7-meter pool of a Pori housing association at its worst in the spring of 2020, when the corona pandemic broke out, the Olympic medal certainly seemed like a distant idea.

In this seven-meter pool of a housing company in Pori, Matti Mattsson “practiced” at his madest after the corona pandemic broke out in the spring of 2020. Photo: Jussi Partanen

In April of this year, in Helsinki, Mattsson swam for the first time in eight years the Finnish record of the 200-meter long breaststroke, 2.08.51.

- It was one of the biggest reliefs in my entire life in a long time.

Faith was a test.

Many more sensible would surely have already quit several times, he repeated his eight years of torment last week in Urheilulehti.

In Tokyo, Karvonen said that after swimming in Helsinki, he believed that even an Olympic medal was possible.

In May, at the long track European Championships in Budapest, Mattsson again improved the 100 and 200 meter SE times.

- Now the best solution has been found for me.

Focus solely on quality, not quantity.

The mind also remains better than before.

It has been found a pleasure to practice.

There are so many miles from my youth that they carry far, Mattsson said in Tokyo.

After his bronze swim, Mattsson shared the credit with his team;

As well as, of course, the main support forces.

- The wife has suffered the most pain and listened when she has not done well.

There have been clear rules of the game at home.

The wife has said it is worth swimming, Mattsson said in Tokyo.

He has told the story of children, a 3-year-old Varpu girl and an Aarni boy about 8 months old, who brought new, important content to life.

Wife Maiju Mattsson and the couple's children Aarni and Varpu at the summer cottage in Luvia.

On Thursday morning, Varpu was not awakened to watch his father's medal.

But maybe in three years, Varpukin will see his father in the Olympic pool.

I don't think this play can be left unattended, Mattsson said in Tokyo.

So that world and the mind of the athlete change.

Five years ago, Mattsson was about to play.

Now he is looking three years ahead.

- But now Dad comes home and celebrates summer vacation, he is in the mood in Tokyo as a fresh Olympic medalist.

Years of pain and the joy of Olympic bronze erupted in Matti Mattsson's air immediately after the Tokyo final.

At the turn of the year 2017–2018, he contracted an autoimmune disease called alopecia, which has made him completely hairless.

In 2019, Mattsson was diagnosed with celiac disease.