Matti Mattsson, who swam in the new SE in the breaststroke semi-finals, exudes exceptional confidence during the Olympic final. He says he lives his own dream. 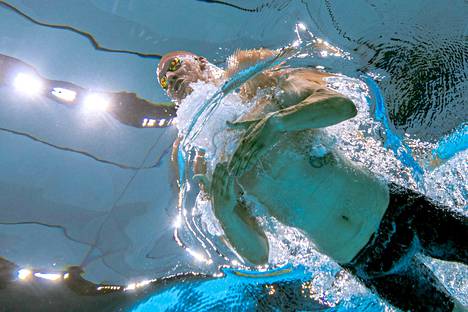 It happened exactly as Varpu Mattsson, who turns four in the autumn, predicted: Matti Mattsson, the father of a daughter from Pori, survived the final of the 200-meter breaststroke at the Tokyo Olympics, which will be competed in early Finnish time on Thursday.

The daughter's hopes came true when Mattsson cannulated a new handsome SE time of 2.08.22 in Wednesday's semifinals and was the fifth fastest in the semifinals.

If the final place had not come, Mattsson's contract in Tokyo would have ended.

- Of course, I have been in contact with my family by phone all the time, and yesterday Varpu said that there are two more swims and then my father will come home.

It became a good feeling, Mattsson, who obviously received a strong charge from the message, said at the swimming arena interview point shortly after his semi-final swim.

- It is important for such a father of two that I have been able to be in regular contact with my home and that the family has followed the race events closely.

Matti Mattsson's bet was huge even in the semi-finals of the 200-meter breaststroke: the result was a new SE time of 2.08.22.

This season, the Pori swimmer, who has improved his SE time for the fourth time, has been aiming for the final place of the Olympics since he was a little boy.

Amazingly, on the surface, the 27-year-old “Porin Karhu” still seemed surprisingly gesturing in front of the media - no major emotional turmoil was visible.

It soon became clear that not everything was what it looked like on the outside.

The mirror-like essence baffled you.

- This (final place) is such a tough thing that almost here the people from Pori become sensitive, Mattsson admitted.

The Finn will be seen in the final pool of the Olympics for the first time since the 2008 Beijing Games, when Hanna-Maria Seppälä swam fourth.

During the history of the Olympics, Finland has won a total of four medals: Jani Sievinen (1996), Antti Kasvio 1992 (bronze) and twice Arvo Aaltonen 1920 (two bronze).

The final will see a nostalgic charge in the sense that Aaltonen, like Mattsson, was a breast swimmer.

- Now you have a really great race ahead of you.

Due to indigestion, Mattsson's race weight has differed by as much as 20 kilos during his career.

Some years before celiac disease was diagnosed in 2019 in a swimming hunter, he weighed as much as 113 pounds.

Now the man’s live weight is about 93 pounds, and you can visually see that the man is in good shape for his life.

The same as now going to pull the jaws of a 20-pound disc disc sandwiched between the arms, Mattsson mirrored.

The rest of the framed athlete was also reportedly affected by a good night's sleep on Wednesday.

- I took the best night's sleep of my entire trip to Tokyo.

Probably because the “recess” made it oddly already after yesterday’s first rounds.

When the recess mode is triggered, it can be taken lightly, the bronze medalist at the 2013 World Cup explained.

- Sure, yesterday's swimming still weighed in the members, but everything went according to plan.

I knew that time would be enough for the finals.

Matti Mattsson has exuded strong self-confidence throughout the Games.

He is only the third Finn in the Olympic swimming finals in the 21st century.

Mattsson didn’t go to speculate about what time would be enough for the medals in Thursday’s final.

Mattsson’s semi-final was won by Australian Izaac Stubblety-Cook at 2.07.35 and was the fastest in the semi-finals.

- In the final, anything is possible.

The medal is, of course, the goal, but it’s not worth thinking about too much, he recalled.

Mattsson said he would spend the rest of the day in peace.

After the final warm-up and meals, the promise was mainly outdoor walking and watching TV.

And, of course, he was going to contact his family.

- Everything is great at the moment, said the swimmer, who has suffered from many kinds of difficulties in recent years.