Is the oiled and shirtless Tongan of the Olympics a mere joke? There is a good reason for the show, he himself assures - “My coach told me to pray”

Tongan Pita Taufatofua’s goal was to compete in three Olympics in three different sports. The Taekwondoka paddler skier has become known for his shirtless performances. 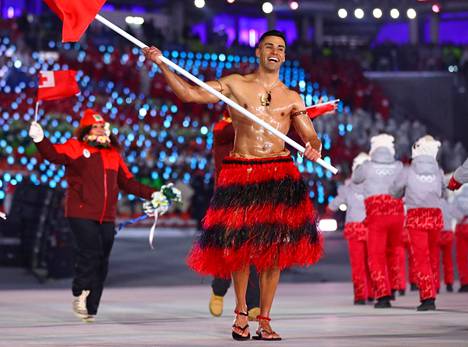 And again and again!

The media rejoiced around the world as the so-called “oiled Tongan” walked chest naked and shiny for the Tokyo Olympics on Friday night.

Pita Taufatofua, representing Tonga, reported on the third Olympic gig, among others, among others, including The Washington Post, The Guardian and The New York Times.

Taufatofua is a Tongan taekwondoka paddler skier who became a living meme the moment he marched on an oil-brushed upper body bare for the opening of the Olympics on a dark evening in Rio in the summer of 2016.

Pita Taufatofua at the opening ceremony of the South Korean Winter Olympics in 2018. Photo: ROB SCHUMACHER

Some also remember Pita Taufatofua from the 2017 Lahti World Championships in skiing.

There, Taufatofua lost 15 miles in a free winner in 23 minutes.

Pita Taufatofua has said many times that her goal is to compete in three Olympics, in three different sports.

Summer or winter races, everything goes.

In Rio he competed in taekwondo and in Pyeongchang in cross-country skiing.

In Tokyo, he aimed at both taekwondo and kayaking.

- I chose the species because it is close to my heart.

Polynesians have been paddling from island to island for thousands of years, Taufatofua said in the Olympic Channel Podcast.

He trained the kayak for two years - then the rib broke and there was a corona pandemic that prevented a race trip to Siberia, where Olympic displays should have been given.

So there is only taekwondo in the 37-year-old Tongan Olympic program in Tokyo.

On Tuesday, he will face Russian Vladislav Larini, 25, one of the world’s top performers.

Taufatofua’s ranking is “on the spin of 360,” as he himself says it.

Larin is the European champion and world champion.

The match will take place on Tuesday morning in Finnish time.

In Tokyo, alongside Taufatofua, the flag was carried by Malia Paseka.

When the match pairs survived, Taufatofua updated on Instagram: “Okay, the draw has been made, and I’m lucky to take on the number one in the world, this time he’s a Russian giant.

The coach told me to pray.

Many replied that they were praying with him.

At the opening, the flag of Tonga was also carried by Malia Paseka, who was in her first Olympics.

Paseka was the first Tongan woman to participate in taekwondo.

His race began on Monday.

After a shot from Briten's Lauren Williams head, Paseka was unable to continue and the referee interrupted the match.

Looking at the hustle and bustle of Pita Taufatofua, the question forcibly comes to mind: is this a joke.

In his latest Instagram update, he spreads coconut oil on his chest and apologizes for the weird clips.

They are actually for Tiktok, where Taufatofua has 1.4 million followers.

There is a good purpose behind it all, Taufatofua writes.

He’s downright fishing for a follow-up question, and soon someone asked.

So what's the point?

- I want to build free internships for young Tongans.

Then bring those world-class coaches and athletes to Tonga for a vacation, in return for which they hold workshops for Tongans for a day or two, Taufatofua replied.

He needs money for his plan, and he needs publicity to get the money.

Even though he has said that maximizing publicity is not his real goal, it is necessary to do good.

Tonga is an island nation in the South Pacific, east of Australia.

The country, with more than 100,000 inhabitants, is highly vulnerable to the effects of climate change due to its geographical location.

In addition to the Olympic medal, Taufatofu has also stated that he also aims to raise awareness of climate change.

The basic principles of the Olympic Movement include the pursuit of building a better world by raising young people through sport.

I guess that's what Pita Taufatofu tries in her own way.

Maybe the same show will be seen seen again in Beijing in 2022?