Jussi and Terhi Marin don’t know how the brochures of a brewery that closed 100 years ago ended up in their detached house. 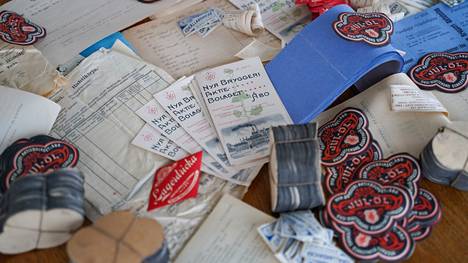 The Turku-based couple Terhi and Jussi Marin experienced a real surprise when they started doing a shower renovation in the autumn of 2019. A discovery was revealed under the floor of a detached house in Itäharju, which eventually led to the establishment of the company.

There was a huge amount of “waste paper” under the floor, which was revealed in various labels and brochures.

It turned out that they came from a brewery called Uusi Brewery, which operated in Turku from 1870 to 1920.

According to Jussi Marin, there were a huge variety of papers among the sawdust.

There were labels and advertisements under the floor, among other things.

The material took the couple to investigate the matter in more detail, all the way to the Swedish National Archives.

- The brewery was founded by the Swedish brewer Carl Gustaf Ritou, and was once one of the largest factories in Turku.

At its best, the brewery produced 700,000 liters of beer a year and employed almost 30 people, Jussi Marin says.

Why a huge amount of brewery paper had ended up under the house floor is still a mystery.

- The story of the brewery ended in 1920, and the construction of this house began in 1928, ie it was eight years apart.

We have information on who built the house, but no connection to the brewery has been found, Marin says.

- The strongest theory is that waste paper would have been used as thermal insulation, but there is no certainty.

It may be that the builder is a carpenter who has been at work at the brewery, but we have not had access to the employee lists.

Terhi and Jussi Marin wanted to take advantage of the historical discovery in some way.

With the encouragement of friends, the couple soon came to the conclusion that the historical discovery must be exploited somehow.

- In January 2020, we registered a limited company.

We hadn’t made any decisions, but that’s where the journey of history and the brewing industry began.

At the end of the same year, we decided to take the matter forward.

From the beginning, the couple raised the issue in Some, through which a partner, Thomas Sjöberg, a brewing professional from Parainen, was found.

- We met him, and the chemistry met.

He now works as an expert in the company and makes recipes, which of course are developed together.

Now the New Brewery camp can be found in 30 shops and 25 restaurants.

The label follows the label of a product 100 years ago.

The new logo is the handwriting of Marin himself.

- It has also been about coat of arms and simplicity, he says.

The bottle label follows the old labels (above).

No exact recipes from the original brewery have been found, but old advertisements have given clues as to what the beers have contained.

- An old newspaper ad said that the beer was made from Bavarian hops and the best malt.

So our camp, too, is made from Bavarian hops.

One of the big enablers of the project was Korona, which changed the couple’s work situations and kept their hobbies on hiatus.

Therefore, there was time for research work and development of our own beer.

However, beer is still a side job for the couple.

They decided to start operating risk-free as a touring brewery.

It refers to a brewery that makes its beer on the premises of other breweries.

The new Brewery products will be completed in Kuopio for the time being.

- We still didn't want to just take a beer from a brewery and put a new label on the side.

Even if the brewery changes, the product is still ours, Marin says.

- We will look at this for a couple of years, and if it seems that this has the potential to remain a permanent sign, at some point we will think about our own production.

Marinas look for advertisements for original products in old newspapers.

The first batch of 4,000 liters has now been sold and the second has just been completed.

In August, they are scheduled to make another flavor alongside the current one.

It has always been important for the couple to bring out the history of the product, as they came across several interesting stories while researching the archives.

- One is, for example, that the Swedish founder has been a childless couple with his wife.

They bequeathed their property to the Turku-based workers' association and orphans.

The old brewery was located on East Pitkäkatu.

The location of the brewery, founded 150 years ago, is known.

The Marines dream that the milieu could still be exploited someday.

- The factory is located on East Pitkäkatu. Today, there are mainly residential apartments, but there is also an empty vaulted cellar. I don't know how that would be suitable for brewing, but hopefully we will be able to organize events there, for example, Marin says.