For these reasons, Slovenia’s confusing cycling miracle is now the best endurance athlete in the world - at first unable to brake and fell embarrassingly on his nose

Olympic gold escaped from Tadej Pogacar in Tokyo, but the bronze medal also strengthened his position as the king of chain spinners. 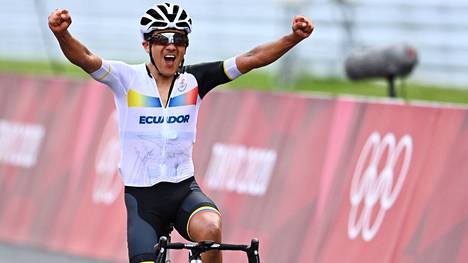 The men’s road trip to the Tokyo Olympics on Saturday was a major celebration of endurance sports.

One of the all-time cycling shows!

The conditions on the hot stage, with a stage of almost 5,000 ascents, were grueling - now the man was really being measured.

Team tactics have always been part of professional cycling, but now its importance has remained marginal.

Olympic gold escaped from the biggest pre-favorite, the young Slovenian star Tadej Pogacar at the end of the race, when Ecuadorian hound deer Richard Carapaz emerged.

His final detachment unexpectedly lasted until the finish line, when the other top names still involved focused on playing underfoot from the world’s best all-time contestant, eventually the silver-stretched Belgian Wout van Aert.

- Even at the end of the kiss, tired as hard as I could ever, when I noticed the victory was within my reach.

The victory feels incredible, and that is what it is for our entire country, Carapaz said at a post-race press conference.

Although Carapaz won the race, Pogacaria, 22, is arguably the best chain spinner in the world at the moment. In cycling, winning a single stage is never an absolute endurance test if it measures the best condition of the day - and so it did especially in the painful mountain ranges of the Olympics.

- I gave everything the man left today.

I’m definitely happy with the bronze medal too, Pogacar, in turn, glowed.

It is often impossible to compare sports, but Pogacar can rightly be considered the best endurance athlete in the world.

The reason is to be found in the brutal nature of cycling: in the most prestigious races of the sport, the winner is not decided in a single race, but usually on the basis of a total race of twenty starts.

When you win the overall race of the Grand Tour, which tracks almost one ring for almost three weeks and regularly travels extreme mountain stages - a tour of France, Italy or Spain with thousands of mileage, you are literally at the top of endurance sports.

That’s exactly where the Slovenian man has climbed in the last couple of years.

Pogacar, who started cycling at the age of eight, fell embarrassedly on his nose in his first practice because he couldn’t initially brake on a racing bike.

However, he quickly rose from the pit of shame, and today he is already a two-time winner of the Tour de France, the bravest of the races (2020 and 2021).

- My career started when I wanted to follow my big brother everywhere, including cycling.

It was great to be able to drive with my brother on local roads every day - and of course always full, Pogacar said in an official interview with the Olympics after arriving in Tokyo.

Read more: Tadej Pogacar, 22, won his second round of the tube in France

The professional cyclist of the past years, Kimmo Kananen, 40, has closely followed the Slovenian's career development.

- Pogacar's rise at this young age to become the biggest star in the world of cycling is kind of surprising, but not against the background that he is a superior talent of his generation, Kananen, who comments on cycling competitions for Eurosport, sees.

- Science has developed so much that today young athletes can be trained for the top of endurance sports much earlier than before.

Before, we trained a little about how it hurts, now as it should.

On the other hand, I doubt that the careers of young stars are not insanely long-lived.

Slovenian wonder Tadej Pogacar is the winner of the Tour de France in 2020 and 2021.

Slovenia itself is one of the greatest wonders of the sports world.

With a population of just over two million, the country has up to two world-class professional cyclists in its ranks.

The other is Primoz Roglic, which is a very familiar name at least in Finnish ski jumping circles.

Although the young man, described as a fearless character, survived, miraculously, without serious injuries, his jumping career was in it.

- Roglic is a special combination.

Suddenly, it would never occur to me that a hill jumper could become one of the kings of such an endurance sport.

However, Roglic's body immediately sat well on the back of the saddle, Kananen's line.

In many other sports, too, Slovenia has achieved surprising success - such as skiing, where it won as many as six medals at the 2021 World Championships in Oberstdorf.

According to Kananen, sports culture is honored in Slovenia.

- For example, there is now a really tough cycling boom.

The whole country is really a competitive gang, pretty much the same as the Norwegians.

When fierce competition arises from the beginning, it develops athletes, Kananen says.

Read more: Slovenian star Primoz Roglic has not recovered from his fierce fall - interrupted a tour of France

Kari-Pekka Kyrö, known as a wide-ranging expert in sustainability sports, talks about the same things.

- Slovenia is a mountainous country with ideal conditions for the growth of cycling miracles.

The country is a suitable mix of Westernism and the old Eastern bloc, Kyrö rotii.

- In Slovenian sports, the culture of losing qualifiers is not relied on in the same way as in Finland, but there is a real culture of demands that emphasizes winning, the ex-head coach of the cross-country team sums up.