Eating disorders are frighteningly common in female athletes. Quick-aider Lotta Harala and sports doctor Pippa Laukka talk about what a worrying phenomenon it is based on their experiences. 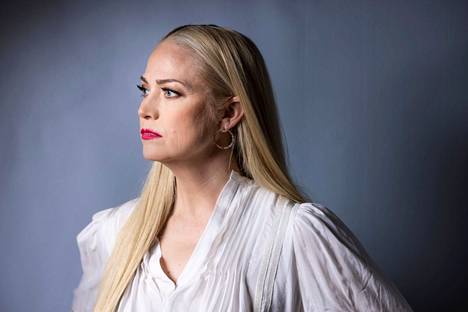 Lotta Harala was 22 when she woke up to a freezing fact: two of life’s biggest dreams were in danger of being destroyed.

The young Promised Aid promised an eating disorder without anyone knowing.

Had been ill for years.

- I realized that if I don't change things radically, I will not succeed in sports and I will never become a mother, now 29-year-old Harala says.

Harala, in her own words, never admired leanness or sought the lowest possible weight.

He just wanted to succeed as an athlete.

- I was extremely good at concealing everything and presenting a relaxed hearty.

I was extremely good at concealing everything.

There is talk of female athlete syndrome, which can lead to eating disorders, among many other problems.

Eating disorders also occur in male athletes, but to a lesser extent.

- Among athletes, the risk of eating disorders is higher than in the normal population, sports doctor Pippa Laukka concludes.

- The fact is that unfortunately a large proportion of athletes also have disturbed eating behavior.

Fortunately, however, many have a completely healthy attitude towards food and their bodies.

Continuous monitoring of nutrition only belongs to this species, whether you like it or not, Harala states.

The numbers are wild.

In endurance sports, eating disorder occurs in 35% of girls and women, in weight classes in 38, in ball sports in 16, and in aesthetic sports in 27%.

Pippa Lauka is very familiar with the subject.

There is already a small victory when the patient dares to see a doctor at all.

- Too often an athlete thinks that his own situation is not bad enough and rejects help.

In many cases, the patient is surprised when an eating disorder occurs - especially when no external signs are yet visible in the body.

For an athlete, this is emphasized because the body is tuned to the extreme, Laukka says.

He knew that the weight-to-power ratio was hugely important in an explosive performance of less than 15 seconds.

Harala wanted to be lighter and faster.

He found on the internet a plethora of different nutritional trends and schools with their own diets and diets.

He decided to be creative, combine what he learned and make his own “own” list of foods he can and shouldn’t eat.

One of the lists just was very short.

- There was almost nothing left on the whitelist.

Every single food is forbidden by someone.

I wanted to do everything as well as possible, but it didn't work out that way, Harala says.

I don’t understand how I periodically run constantly when I ate so non-existent little.

He says he remembers little of those times.

The years tinted by overheating, food intake and unhealthy control of training seem to the Finnish champion a steadily gloomy fog.

- I don’t understand how I periodically run constantly when I ate so non-existent.

I didn’t end up in the hospital or anything like that, but I was constantly destroying my own development and life.

I pulled badly into the notebook.

According to Harala, an eating disorder slowed his development as an athlete.

Eventually, Harala dared to talk to a professional after realizing that not only sports but also dreams of family and children are at stake.

However, with his first cry for help, he received the worst response.

When I finally gathered courage and dared, I was not taken for granted.

It felt like I was just a pointless appellant.

I could pull a terrible kitty diet, and then when I couldn’t take it anymore, I started gobbling up.

The next attempt at help came, for which Harala is grateful.

Work began on the matter, and a long process of recovery began.

He has been looking for a healthier attitude towards food and running for years, and has succeeded.

- The journey is still in progress.

The illness took various forms along the way, and I went from one extreme to the other: I could pull a terrible kitty diet, and then when I couldn’t take it anymore, I started gobbling up.

Now I’ve gotten out of the worst of control, but I don’t know if I can ever say I’m completely healthy.

Signs of latent eating disorder are difficult to identify.

According to Pippa Lauka, withdrawal from social situations, apeus, fatigue and impaired stress tolerance spoke about them.

The list of predictions of concern is long, which makes diagnosis difficult.

According to Lauka, eating disorders arise from the reactions of the autonomic nervous system before the problems are necessarily seen on top or even reflected in physical or mental well-being.

- It can be difficult to draw the line between an eating disorder because going to extremes and a certain absoluteness are an essential part of top sports.

However, for athletes, the limit is reached faster;

an ordinary person has more of that kind of border zone and resources, and the problem does not necessarily swell so fast, Laukka says.

Sports are not always the root cause of an eating disorder.

For many, self-testing is a trait that originally guided sports to look for the limits of their own abilities.

- Top sports and being in top condition is extremely demanding, both physically and mentally.

Often, athletes at the top have certain types of mental structures, such as perfectionism and goal-seeking, that feed the pursuit of perfection and predispose them to eating disorders, Laukka says.

The specialist in sports medicine reminds us that the requirements do not always come from outside, but arise from the athlete himself.

Harala is a living example of that.

- I am extremely demanding and critical of myself.

My character is prone to performance and perfectionism.

When there’s this type, training and eating easily get out of hand, Harala sighs.

Recovery from an eating disorder is a painfully long process.

Harala still doesn’t feel completely healthy yet - if ever.

The causes of eating disorders are many and often very difficult to diagnose, but one thing is for sure.

There are so many cases of eating disorders in sport that there are also structural and cultural problems behind it.

- There is always a small contradiction in sports and its body image in relation to humanity, Laukka formulates.

Harala does not want to blame sports for his illness.

However, he admits the paradox.

- In top sports, you have to be careful about what you eat, because in our sport, weight unfortunately matters.

But too little food and blaming ruins everything - a sports career and health.

Finding a balance is difficult for many.

Absoluteness, Performance Focus, external pressures and comparisons, which are part of the culture of top sports, are too much for many athletes who are performing at a sensitive stage.

In a time dominated by social media, pressures have multiplied.

- Comparing yourself to others is so insanely easy - and dangerous.

And it’s not just about looks, it’s about you being able to judge the athleticism and performance of others.

It easily becomes a bad fashion and a feeling of inadequacy.

You have to be super strong to avoid all that, Harala admits.

Fortunately, athletes today are helped by a better support network and the atmosphere has become more open and bolder.

Eating disorders are still a giant problem in sports, especially in women, but the situation is better than ever.

Understanding of a woman’s body has increased in recent decades.

- Back in the 1980s, many coaches thought that the menstrual cycle, for example, was not part of top sports, Laukka illustrates.

- Fortunately, athletes today are helped by a better support network, and the atmosphere has become more open and bolder.

A culture of speaking alone is not enough.

Harala hopes that an athlete struggling with his eating and appearance will have the opportunity to seek expert help on an even lower threshold.

- A professional should listen to the athlete and see his pain, even if the problems are not visible to the outside world.

Athletes need expert help to understand an athlete’s needs as an individual.

- At the heart of it all is trust.

Are there people in the athlete's immediate circle who can be talked to about it on a low threshold and in confidence?

The gallop, in turn, emphasizes.

Eating disorders are too often associated with shame, both Laukka and Harala confirm.

- I know that many ideas related to eating and training are really a bit absurd.

However, no athlete should face contempt or even wonder about them, Harala states and continues:

- Eating smart can achieve everything without ruining anything. When you get expert help, and don’t giggle yourself, you can be really energetic, recovered, and joyful - and at the same time in super-tight performance at its peak.