Heli Karhumäki, who fell on an electric kickboard, feels that he was lucky, as he survived the accident without serious injuries, for example to the head area. 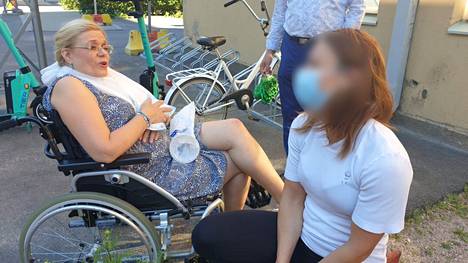 Heli Karhumäki's fun day at a relative's hangover party in Helsinki ended at the beginning of July on a hospital trip after she fell on an electric kickboard.

The fall was preceded by the spontaneous decision of Karhumäki, her husband and son to go for a ride.

All three are experienced kickboarders.

- I have driven in many different places, on cobblestones, park corridors and asphalt, Karhumäki lists.

The family drove in peace, as they were not yet in a hurry to return home to Ostrobothnia.

The speed was estimated at 10 to 15 kilometers per hour.

He collided with a cobblestone that wedged under the board.

The shake detached my other hand from the handle, and before I realized it, I had already hit the street.

It happened insanely, of course.

Heli Karhumäki, who fell on an electric kickboard, received first aid in less than half a minute from the vaccination point next to the accident site.

While waiting for the ambulance, the hand was covered with ice and lifted into a bandage.

The nursing staff brought him a wheelchair as well as a vomiting bag in case of concussion and possible nausea.

Karhumäki was lucky in the accident, because there happened to be a corona vaccination point next to the crash site.

A guard at the door saw him fall and called the vaccination point for help.

The nurses immediately made sure that Karhumäki's head had not hit the asphalt.

An ambulance was alerted to the scene.

Accidents due to electric kickboards have congested emergency services, especially in Helsinki.

Most people in need of treatment have hurt themselves intoxicated.

Karhumäki was also blown as soon as the ambulance arrived.

- Zero, I was blowing when we were coming to the family party.

At the hospital, a nurse said those who crash with an electric kickboard face to face get special sympathy because there are so many dropped people drunk.

At the hospital, he got to experience what congestion caused by kickboard accidents is in practice.

He waited in severe pain for nearly three hours before reaching the reception.

Heli Karhumäki's journey pushed into the paving, the edge of which wedged under the kickboard.

The fall caused a bruise on Heli Karhumäki's knee, which heals on its own over time.

Karhumäki flew to the ground in front of his left palm, as a result of which the spinal cord of the wrist broke.

The fragmentary fracture extended to the synovial membrane.

At the hospital, the hand was pulled straight and plastered.

Two days later, the hand was cut in Seinäjoki.

Karhumäki was ordered for five weeks of sick leave.

In July, the Ministry of Transport and Communications held a meeting to restrict the use of electric kickboards in Helsinki.

The rental companies that attended the meeting proposed a maximum night-time speed of 15 hours per hour for their equipment.

Later, the companies announced that they would lower the night speeds of the ferries in other cities as well.

Read more: How to restrict the use of electric kickboards in Helsinki - Minister Harakka: “This is everyone's concern”

Read more: Night speeds for electric kickboards are limited in all cities

As a result of the fall, Heli Karhumäki's wrist broke and had to be cut two days after plastering.

Bruises that occur after surgery are common.

After the operation, Karhumäki's fingers were swollen and blue-yellow for a few days.

The fingers swelled so that the rings had to be cut off.

Heli Karhumäki is not in favor of strict bans, but he thinks it is good to limit speeds in the evenings and on weekends, as accidents employ a huge number of people and become costly to society.

According to his calculations, his wrist has been cared for by a total of 64 professionals to date.

He stresses that an electric kickboard should never be run under the influence of alcohol.

- The electric kickboard is a more unstable vehicle than even a bike.

Attention must be relentless when driving.

Karhumäki says that he would like to continue riding the board.

However, after the accident, he has decided he no longer wants to take the risk of falling over.

A hand that has already been cut once could be difficult to repair again.

The removal of whole plaster after a sweaty period of two weeks was a relief for Heli Karhumäki.

It will be replaced by a child to be affixed with stickers.

The ossification of the wrist continues for months.

According to Heli Karhumäki, the surgical wound has healed well.

The nurse removed the stitches from the wound.

After removing the plaster, the physiotherapist gave Karhumäki instructions for home rehabilitation of the wrist.

The nurse covered and taped the wound with a bandage.

- I have to say that I'm sad to give up squatting because it's the best thing to do in the summer.

Nonetheless, he feels lucky because, for example, his head, spine or neck were not damaged.

- This, too, will be a surprisingly long and arduous recovery, even if it was just a spindle.