Read here with the press conference of the cabinet 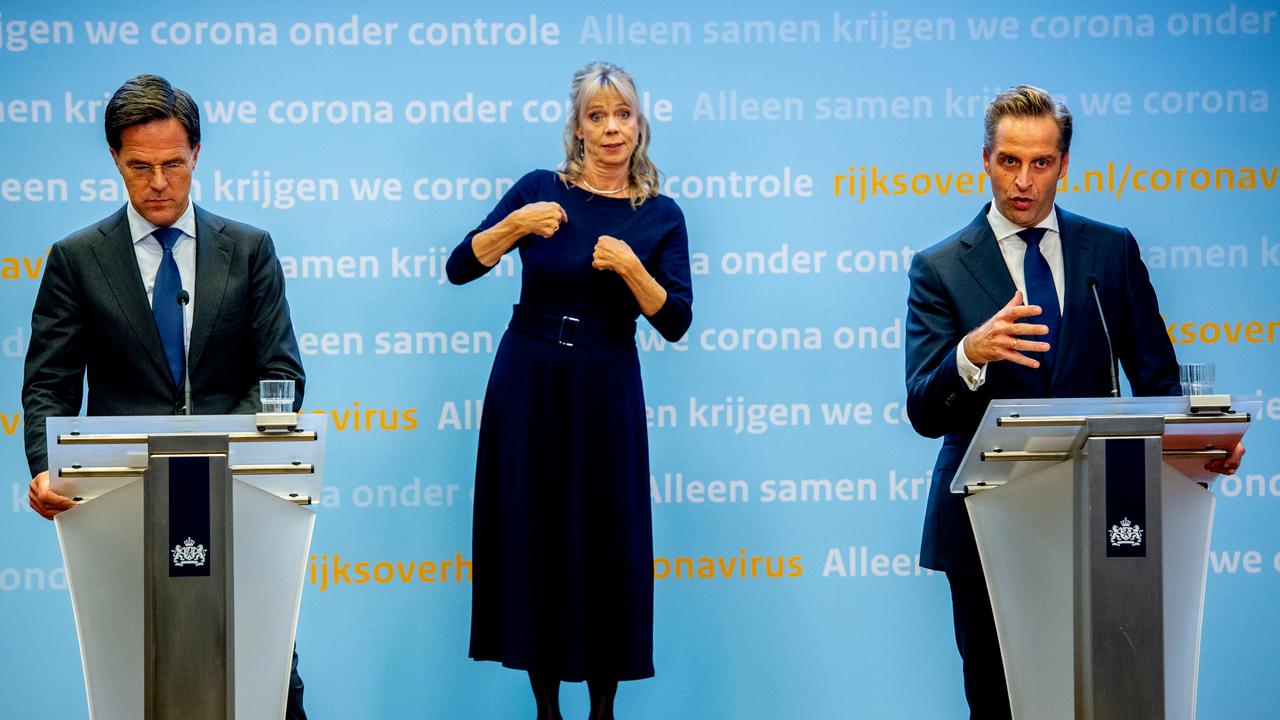 Read here from 19:00 with the press conference of Rutte and De Jonge.

In just under half an hour, outgoing Prime Minister Mark Rutte and outgoing Minister of Health Hugo de Jonge will hold another corona press conference.

In all likelihood, the cabinet will announce significant relaxation of the measures.

The press conference can be followed live via this live blog and our live stream.

Hugging allowed again in some prisons

The corona rules are also being relaxed in prisons. The detainees are allowed to receive more visitors and in a number of prisons they can briefly hug visitors again, provided they wear a mouth cap. This is what Minister Sander Dekker of Legal Protection writes to the House of Representatives.

The RIVM advises the Custodial Institutions Service not yet to remove the Plexiglas screens from the rooms where detainees receive their visitors. This is because the coronavirus can be transmitted during conversations and the 1.5 meter distance is not observed.

The permitted group size within the institutions ranges from thirty to fifty people, provided the spaces are suitable for keeping a distance.

New detainees are still preventively placed in a single cell on arrival, but after five days they can go to a regular ward and participate in day programs.

That was eight days earlier.

Detainees who have been incarcerated for a long time can receive an unsupervised partner again with a negative test.

And fathers or mothers no longer have to quarantine after receiving their children.

For tbs'ers, all leave options will be resumed.

Belgians are allowed to dine or drink together longer and with more people.

Belgians will soon be able to go to cafe and restaurant for longer.

Now that the corona epidemic continues to lose momentum, they can also sit at the table with twice as many people (from 4 to 8), the responsible ministers have decided.

Now the catering industry still has to close at 23.30, but according to Belgian media, that will be 01:00.

Pub owners and restaurant owners are also allowed to place tables closer together than 1.5 meters, provided they are separated by a plexiglass wall.

The relaxation will take effect next Sunday, just in time for the eighth finals of the European Football Championship.

The Red Devils, the Belgian national team, have already qualified for this.

Lisbon locked due to delta variant, tourists are allowed to leave

The Portuguese capital Lisbon was locked on Friday afternoon due to the growing number of corona infections. The approximately 2.8 million inhabitants of the metropolitan area are not allowed to travel to other parts of the country until early Monday morning. Tourists who fly to Lisbon and then want to travel on to their holiday destination outside the city will not be stopped.

The authorities registered 928 new corona infections in Lisbon on Thursday, the largest increase since February. Nationally, 1,233 new corona cases were reported that day. That means about 75 percent of new infections were found in the urban area near the capital, although only 27 percent of the population lives there.

Authorities believe the rapid rise in the number of infections is due to the delta variant of the virus, which was first discovered in India.

Rutte about handshake king: 'Let's not make it too hard'

According to Prime Minister Rutte, King is "disappointed" after ignoring corona rules

King Willem-Alexander is "disappointed" according to Prime Minister Mark Rutte that he did not comply with the corona rules when he visited the Haagse Marktweg on Thursday.

He shook hands with a bystander and did not keep 1.5 meters away.

1 billion pounds (1.2 billion euros) in corona support to the government. They received a form of wage support to get through the corona time. Some of the companies were not entitled to the government support with retroactive effect and another part transferred the money back of their own accord.

The wage support was intended for companies that had to send their staff home during the crisis. For this they were reimbursed 80 percent of the wage costs.

£309 million was returned by companies that had applied for too much aid.

In total, the money recovered is only a small fraction of the cost of all UK aid packages.

London lost a total of at least 352 billion pounds on this.

shared during the week.

The National Coordination Center for Patient Distribution (LCPS) will only report on hospital occupancy during the week.

The reason is the low number of corona patients in Dutch hospitals.

The weekend figures are shared on the site of the coordination center on Monday afternoon, together with the daily figures for Monday.

This means that figures about the occupation in the intensive care units and the nursing wards will be published for the first time next Monday.

If hospital occupancy increases again, the sharing of the figures will resume on the weekends.

Number of corona patients in hospitals has fallen sharply

The number of corona patients in Dutch hospitals has fallen sharply in the past 24 hours. The hospitals currently care for 533 patients with COVID-19, the disease caused by the corona virus. On Thursday, the counter stood at 573 covid patients.

On Wednesday, there were still 605 corona patients in hospitals. In two days, the occupancy has thus decreased by 72 patients.

Four new corona patients have been added to the intensive care unit (IC) in the past 24 hours, the National Coordination Center for Patients Spreading (LCPS) reports.

Because more people have been discharged from hospital or have died, the total number of corona patients being cared for in those departments has decreased.

On Thursday there were 226.

NU.nl that outgoing Prime Minister Mark Rutte will respond briefly on Friday afternoon to the fact that King Willem-Alexander did

not comply with the corona rules

during a visit to a street in The Hague.

According to Minister Grapperhaus, there is no exception to the rules for members of the royal family.

Van Ark also believes that the rules are there "for all of us".

Million vaccinations not yet registered: will you get a corona passport?

More than a million injections are not yet in the central administration of the RIVM, it turned out on Thursday.

Does this affect getting a corona passport?

The Ministry of Health and the GGD GHOR do not expect it.

Prime Minister Pedro Sánchez has announced that the masks will no longer be needed from next Saturday.

With a view to the upcoming holiday season, the abolition of the mask requirement seems to be a nice boost for tourists who want to go to Spain.

Earlier, a mandatory negative result of a PCR test for Spain was also abolished.

A negative antigen test or vaccination certificate is still required.

OMT would advise the cabinet to keep the one and a half meter rule for a while, mouth cap can go

The Outbreak Management Team (OMT) would advise the cabinet to keep the one and a half meter rule until at least mid-August.

As far as the experts are concerned, face masks will no longer be necessary from June 26, except at the airport and in public transport.

The number of corona-related deaths passed four million on Friday, according to a count by the

. Although the number of new infections and deaths has decreased in countries such as the United States and the United Kingdom, there is a shortage of vaccines in several countries as the Indian variant (delta variant) becomes the dominant variant in the world.

It took more than a year for the death toll from COVID-19 to reach two million, while the subsequent two million deaths were recorded in just 166 days. The 2.5 billionth corona jab will probably be taken on Friday, according to data from the American Johns Hopkins University.

The top five countries with the highest death toll - the United States, Brazil, India, Russia and Mexico - account for about half of all corona-related deaths in the world.

Since the start of the outbreak, more than 1.6 million people in the Netherlands have tested positive.

The number of deaths fell last week compared to the previous week. In the previous week there was still an unexpected increase. This means that the death rate is almost back to a usual level, the Central Bureau of Statistics (CBS) reported on Friday.

For much of 2020 and 2021, the number of deaths from the coronavirus was much higher than usual. The excess mortality seemed over, until two weeks ago suddenly slightly more people died than normal. A CBS spokesperson does not expect COVID-19 to be the cause. The number of new infections is decreasing and more and more people have been vaccinated. She didn't rule out that it was a coincidence.

Last week, the number of deaths in all age groups fell again.

That's 50 more than the researchers expected based on death rates in previous years and demographic trends.

Only the number of deaths among 65- to 80-year-olds was higher than usual.

shots The limit of thirteen million corona shots has officially passed, according to figures from the corona dashboard on Thursday evening.

By far the most administered doses are Pfizer vaccines (8.6 million).

The acceleration of the vaccination campaign ensures that the Netherlands is in the second top in Europe in terms of vaccination rate.

In terms of first injections, the Netherlands is seventh, while our country is ninth in terms of fully vaccinated adults.

Germany will open the borders for vaccinated travelers from outside the European Union later this month. They must have been vaccinated with a corona vaccine approved by the European Medicines Agency (EMA) at least fourteen days before departure.

Germany is still pursuing a strict border policy, but that will be largely relaxed on 25 June. Then vaccinated people from outside the EU may also travel to Germany for their studies or to celebrate a holiday, the Interior Ministry reports. They must be fully vaccinated against COVID-19, which in most cases means they must have had two doses of a corona vaccine.

To prevent fraud, travelers must be able to prove that they meet the vaccination rules, insiders say.

Airlines and the police are said to have to check that.

The German border will remain closed to people from areas where the corona virus is spreading quickly.

Healthcare providers in Austria can look forward to a one-time financial bonus because of their efforts during the corona pandemic. It is about 500 euros. That amount goes to staff of hospitals and nursing homes, but not all employees can claim it.

The plan is expected to cost Austria around 100 million euros and was approved on Thursday by the National Council, the lower house of parliament. Group chairman August Wöginger of the ruling party ÖVP called the bonus a token of appreciation for those who worked on the front line during the corona crisis.

The amount that individual healthcare providers receive can still be adjusted by governments and institutions.

They can decide to give people a higher bonus if they had a heavy package of tasks, for example because they worked in intensive care or in a department for the treatment of corona patients.