Reporters grilled Putin - "What are you afraid of?"

Russian President Vladimir Putin either circled or calmly failed to answer embarrassing questions about, among other things, Alexei Navalny and the protests in Russia. 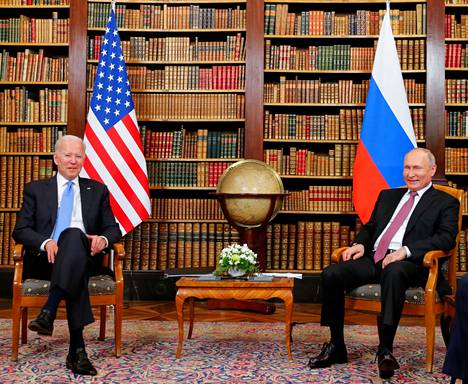 Rachel Scott, a journalist for the US television channel ABC, attended Putin's press conference in Geneva, Switzerland, on Wednesday and asked Putin tough questions about his political opponents.

- The list of your political opponents who are either dead or imprisoned is long.

Alexei Navalny's organization opposes corruption and runs free and fair elections, but Russia has declared the organization illegal and calls it an extremist movement.

You have rejected anyone who supports his rise to power.

My question is, Mr President: what are you so afraid of, Scott asks Putin.

In the video above, Putin’s reaction to the question.

Putin toured the question of the fate of political opponents and spoke, among other things, about the capture of Capitol Hill in Washington as an Epiphany, and mentioned the Black Lives Matter riots that began in May 2020 with the death of George Floyd.

- We have sympathy for the United States, but we do not want that to happen in Russia, Putin said.

According to Putin, political counterparts have the right to act in Russia, but extremism is the exception.

According to Putin, “this organization you are talking about” has acted illegally and threatened to undermine national security with its actions.He did not mention Navalny by name.

- They have publicly asked to break the law and invited minors to participate.

They have spoken about the use of fuel bottles against authorities, including the police, Putin said.

- Fear has nothing to do with anything, Putin concluded.

Scott was not satisfied with Putin's answer, and he put a follow-up question to Putin, which he initially pointed out that Putin did not answer his original question.

“If all your political opponents are dead, in prison, poisoned, isn’t that a message that you don’t want fair political competition,” Scott asked.

In his response, Putin went on to talk about what was happening on Capitol Hill.

- Speaking of who kills the cooks and who captures the cooks.

People who infiltrated the U.S. Congress made political demands.

More than 400 people have been indicted and some of them are facing up to 25 years in prison.

Some of them were killed by the police.

According to Putin, the same is happening in many countries.

He reiterated his earlier statement that Russia experiences sympathy for the United States but does not want the same to happen in its home country.

Joe Biden and Vladimir Putin discussed for about three hours at a summit in Switzerland.

Scott’s actions at the press conference garner praise on Twitter.

So direct, fearless and unforgivable.

- ABOUT asking questions, another praise.

- Thank you for showing the public what journalism really is, the third says.

Canadian journalist Tamara Alteresco said her 9-year-old daughter wondered why the summit “is such a big deal”.

- I would like you to explain to us in your own words, Mr President, why the relationship (between Russia and the United States) is so complicated.

In addition, I would like to know why young people are not allowed to demonstrate in Russia, Alteresco asked.

Putin quickly ended his press conference and failed to answer a final question from a Canadian journalist.

Putin said in his response at first that he thought it was a great thing that Alteresco’s young daughter was interested in such things.

He said the major nuclear-weapon states must make the world a safe and good home for all the people of the world.

According to Putin, states are discussing rules that do not use nuclear weapons and that rivers and seas remain clean, there is enough food for everyone, and everyone has access to education and health care.

Thank you and good evening, Putin said and closed the press conference.

He did not answer the question about the protests.