Good evening and welcome to this European Championship live blog on NU.nl. My name is Jeroen van Barneveld and I will keep you informed of all developments regarding the European Championship football. Lots of fun! Program today: LIVE: Denmark-Finland 0-0 21.00 o'clock:  Belgium-Russia (Group B) Rash: Wales-Switzerland 1-1 in 3 days The cameras in Copenhagen switch away from Christian Eriksen 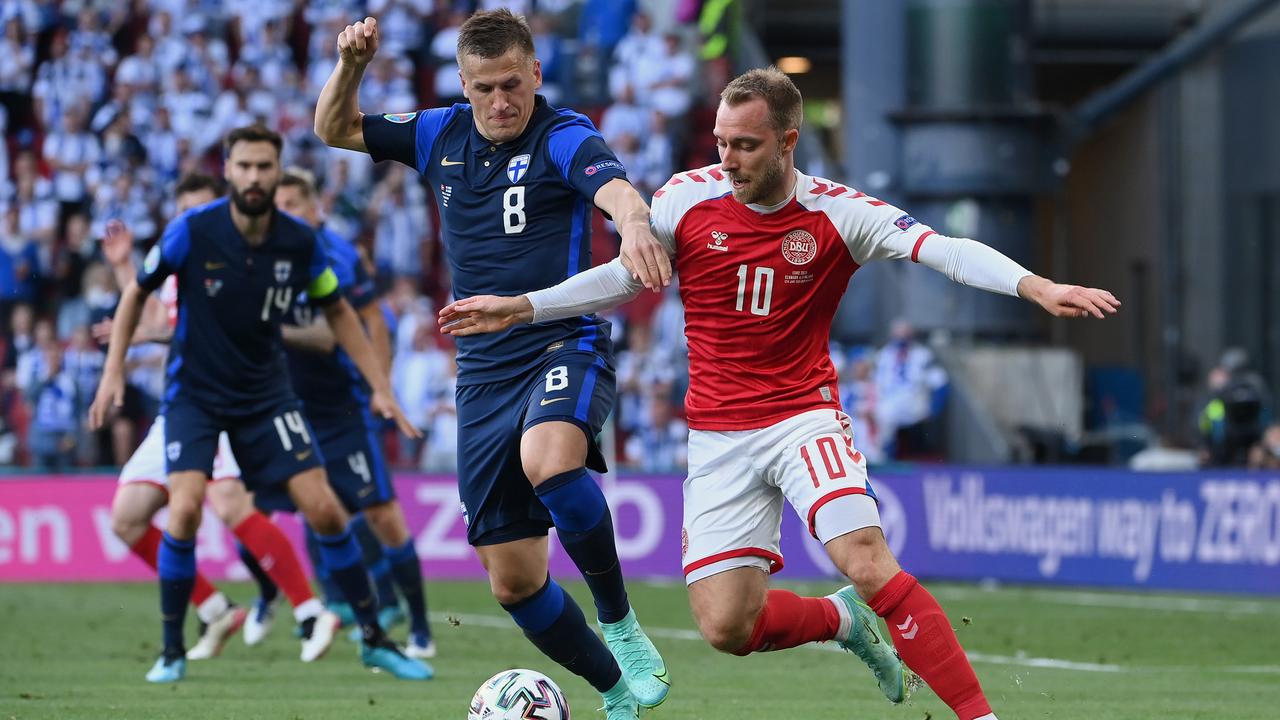 Good evening and welcome to this European Championship live blog on NU.nl.

My name is Jeroen van Barneveld and I will keep you informed of all developments regarding the European Championship football.

The cameras in Copenhagen switch away from Christian Eriksen.

The doctors are saving the life of the former Ajax and Tottenham Hotspur player here.

45 'In an intermediate shot it can be seen that Christian Eriksen is being resuscitated by rushed doctors.

Denmark's players are praying for a good outcome.

What a horrible moment in Copenhagen.

43 'These are very nasty images in Copenhagen.

Christian Eriksen takes the ball to his chest and then falls motionless to the ground.

There is great panic in the Danish camp.

The angular striker of FC Barcelona curls the ball from the edge of the penalty area meters next to Lukás Hrádecký's goal.

The Danish storm has calmed down a bit.

34 'And again the game is stopped due to an injury treatment.

It is not at all unfriendly at Denmark-Finland, but four Finns have already been treated after an unfortunate moment.

Now Daniel O'Shaughnessy gets the ball hard in his face on a corner from Christian Eriksen and the Finnish doctor has to get back into action.

30 'Ai, that's not a pretty picture in Copenhagen.

The Finn Jere Uronen and his goalkeeper Lukás Hrádecký collide hard with a sharp cross by Joakim Maehle.

28 'The game is suspended for a while due to an injury treatment for Finnish star player Teemu Pukki, who unintentionally gets an elbow from Andreas Christensen in his face during a duel.

The Danes shoot the ball out.

In any case, there is no lack of sportsmanship among the Danes.

26 'Martin Braithwaite thunders down the left flank like a tgv and there is no Finn who can keep up with the FC Barcelona attacker in the sprint over about 30 meters.

His only problem is that the shutters come down when he gets to the target.

He clumsily shoots his left leg into the side net.

We will probably see moments like this often in this match: the Finnish goalkeeper Lukás Hrádecký who has to save a Danish attempt.

Denmark dictates the game and has Finland by the throat.

When will the home team push through?

Here Christian Eriksen is close to the opening goal for Denmark that has been in the Danish air for minutes anyway.

The former Ajax player fires the ball from a great distance and the Finnish goalkeeper Lukás Hrádecký has to save again.

How long can this NGO go well for Finland?

The goalkeeper beautifully taps a header from Pierre-Emile Højbjerg onto the crossbar.

Finland is on the brink of collapse in Copenhagen.

7 'Once again goalkeeper Lukás Hrádecký has to lend a helping hand to Finland.

He saves in the corner on a hard long shot from Jonas Wind.

Denmark is close to a lead against European Championship debutant Finland.

The goalkeeper does not have the ball directly in his hands twice with a corner kick from Denmark, but it does not lead to a goal from Denmark.

Denmark is off to an excellent start in its own Copenhagen.

4 'There, referee Anthony Taylor already shows the first yellow card of the game. Robin Lod goes on the ticket after four minutes for an awkward tackle on Martin Braithwaite.

The ball rolls in the Parken stadium in Copenhagen.

Can Denmark grace the start of its European Championship at home with a win over Finland in the Scandinavian get-together?

The teams enter the Parken stadium in Denmark.

We are going to listen to the national anthems.

No less than 25,000 spectators are welcome in the Parken stadium in Copenhagen tonight.

Initially, there were 15,900 due to the corona measures, but the government allowed more supporters due to the favorable corona figures.

When you think of the football players of Denmark, you probably think back to the European title of 1992. To everyone's surprise, the so-called camping team became European champions by beating Germany in the final.

In the lineups of Denmark and Finland we see two old Eredivisie acquaintances: the Finn Tim Sparv (former FC Groningen) and the Dane Christian Eriksen (ex-Ajax).

We are preparing for the second European Championship match of the day: Denmark-Finland.

With Russia and Belgium in their groups, both countries actually have to win to claim the important second place, which leads to the eighth finals.

Who will win this Scandinavian get-together?

Wales will be best able to live with this draw, given the dominance that the Swiss had in much of the game.

Breel Embolo also expressed that dominance in the score after the break with a striking header, but out of the blue Kieffer Moore put Wales back on the same level with a beautiful headbutt.

The winning goal of the Swiss substitute Gavranovic was rejected by the VAR for offside.

90+3' Page cherishes the point and brings an extra defender for the final phase.

His cracked bet can be tapped just wide by an outstretched Ward.

In addition, the flag goes up again for offside.

90 'Five minutes are added to this match, which waves up and down after Moore's equalizer.

90 'Once again Embolo can head from a corner, but now Ward has an answer to the scorer's header.

89 'There was almost the moment of Gareth Bale, who we have hardly seen in this match.

However, the captain and star player of Wales sees his bet blocked.

He now hits the ball a lot less well, causing it to roll wide.

Indeed, it turns out to be offside, so that Gavranovic sees a hero role being drilled through the nose.

Substitute Gavranovic taps in a minute after his substitute, but it looks suspiciously like offside.

He will be replaced by Mario Gavranovic, striker of Dinamo Zagreb.

82 'Substitute Brooks comes after a good combination with a dangerous low cross, but the sliding Ramsey comes just too late to get to the ball.

Switzerland seemed to have everything under control, although Wales insisted a little more, but now has to start over.

David Brooks, who plays for Bournemouth at the second tier in England, replaces Daniel James.

Out of nowhere Wales equalize!

After a short corner, Joe Morrell brings the ball in.

Moore comes in front of his man and heads the ball beautifully into the far corner.

66 'The Swiss national coach Vladimir Petkovic is responsible for the first substitution of this match.

Denis Zakaria, Gladbach's midfielder, joins the team and Xherdan Shaqiri, one of the eye-catchers of this team, goes to the side

65 'There is Embolo again, by far the most dangerous man of the second half.

He curls the ball towards the far corner, but the ball spins just wide out of Ward's reach.

64 'Wales is now getting a little stronger.

Aaron Ramsey, invisible until now, dangerously attacks a free kick, but Bale and Moore both miss the ball.

61 'After a corner kick that has been deflected, Ben Davies gets the ball in front of his feet.

Embolo towers over Roberts and heads Switzerland ahead.

It is a deserved lead for the Swiss, who are the better team for almost the entire game.

Wales will now have to come, which can again provide room for Embolo, for example, in the switch.

52 'Once again Embolo breaks through the Welsh defense with a great individual action.

Now he puts the ball well on Mbabu, but he hits the ball completely wrong.

Breel Embolo first encounters Ward after an impressive rush, but the Borussia Mönchengladbach attacker heads in the following corner.

46 'The ball rolls back into Baku.

Will we see more spectacle and goals after the break?

Wales and Switzerland do not entertain in the first half and so 0-0 is a logical half-time score.

Especially the Swiss try, but find it difficult to get through the Welsh wall.

45 'At the end of the first half, Seferovic may have the best chance of the match.

Embolo keeps his opponent well away from him and puts it on his companion, who has a free shot chance of about 10 meters, but hits the ball wrong.