The truck started quietly, and the omissions were repeated - three fined for their mother's death in Jyväskylä

The woman, who was born in 1991, was left under a truck leaving the construction site on the street and plumbing. The little girl in the stroller was saved, as if by a miracle. 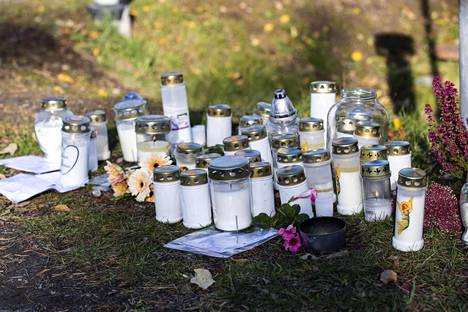 The Central Finland District Court has fined three people in October 2018 for a traffic accident in Jyväskylä in which a mother carrying her child in a pram was killed.

The woman, who was born in 1991, was left under a truck leaving the construction site on the street and plumbing.

The little girl in the stroller was saved, as if by a miracle.

The wagons got stuck in the bumper of the truck and traveled tens of meters in front of the car.

The CEO of the subcontractor, who acted as the driver of the truck, did not immediately notice the collision.

The man, born in 1980, did not realize it had happened until the oncoming motorist flashed the lights.

Plenty of candles were brought to the crash site in October 2018. Photo: Hannu Rainamo

In a judgment handed down by the Central Finland District Court today, a subcontractor who drove a truck was sentenced to a 70-day fine for death, occupational safety and endangering traffic safety.

According to the subcontractor who drove the ambulance, the woman pushing the stroller had stepped in front of the truck completely unpredictably.

According to witnesses heard in court, the man had set off very slowly by truck, but the accident had occurred nonetheless.

- I felt that the truck started moving so slowly that I assumed the driver had seen a woman, the witness who saw the accident was assessed at a police preliminary investigation.

Part of the reason for the accident, according to the district court, was that the site had not been properly insulated.

As a result, the company's foreman and foreman, who acted as the main contractor, were both convicted of an occupational safety offense.

Born in 1985, the defendant foreman was sentenced to a 20-day fine, knowing his income would fall by 480 euros.

In court, all three convicts denied the charges.

According to the district court, the defendants acted negligently.

As such, minor omissions recurred in a fatal way and with devastating consequences.

Today's judgment is not yet final, but you can apply for leave to appeal to the Vaasa Court of Appeal.