BuzzFeed: Joe Biden endangered himself and those close to him by sending money to his grandchildren - this is why a popular app could be a security threat

U.S. media BuzzFeed managed to track down Joe Biden’s user account and all of his contacts there in less than ten minutes. 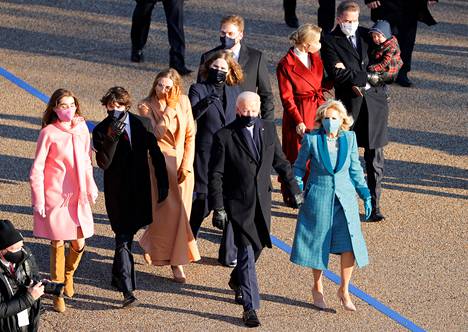 The New York Times reported Friday that President Joe Biden is using the popular Venmo app in the United States to send money to his grandchildren.

Venmo operates in the same way as the mobile payment services used in Finland, such as MobilePay and Pivo.

In Venmo, however, the User Profile and payment information, except for the amount, are public by default and this information is available to anyone unless specifically prohibited by the user.

Even if the payment information is private, as Biden had, it is still able to find out a lot of information about users 'private lives through the application, as Venmo works partly like social media and users' friend lists, for example, are public.

Biden's children, grandchildren and even White House staff and their personal contacts, through which it is possible to fish for location information, for example, were present.

Biden's account was found in the app in less than ten minutes, according to BuzzFeed.

Venmo's privacy on the backyard has been a concern in the U.S. in the past, but in the case of a high-ranking person in the state, the information available from the app could be seriously detrimental even to national security.

For this reason, BuzzFeed will not publish the information it has obtained.

Using the search data used in the application alone, it was possible to create an accurate picture of Biden's close circle.

BuzzFeed says he contacted the White House on the matter, after which the accounts of Biden and his close circle disappeared from the app very quickly.

The White House has not yet commented on the matter.

A Venmo spokesman commented on the case to BuzzFeed only after the first news on the subject was published.

According to him, the security and privacy of all users is paramount to the company, and Venmo takes it seriously.

- Customers have the ability to hide their own payment transactions and define their own privacy settings in the application.

We are constantly developing the security and privacy of our service, a Venmo spokesman says.

BuzzFeed points out that in any social media service, user contact lists are not public by default in the same way as in Venmo.

It’s also not possible to hide your friends in the app other than manually removing them from your contacts one at a time.

Venmo also primarily offers the possibility to integrate phone contacts and, for example, Facebook friend lists into the application, which become public information in the application.

According to the former developer of the application, the solution has been aimed at ease of use and rapid growth.

Alex Stamos, a professor at Standford University and former head of security at Facebook, tells BuzzFeed that apps that use social features shouldn’t allow unknown people to access other users ’data by default.

“Information that is detrimental to national security is readily available to intelligence services, and some may use it for persecution purposes, for example,” says Stamos.