The war in Gaza may not be the biggest concern. Politicians and activists are even talking about the crumbling of the foundations of the state. 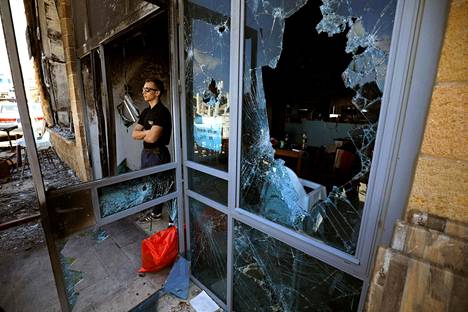 The Israeli-Palestinian conflict escalated late Thursday into a near-full war in closed Gaza, where extremist organization Hamas has fired rockets at Israel and Israel has responded with devastating air and artillery strikes on the Palestinian territory.

However, the situation in Gaza is not the only serious concern in the eternal conflict in the Middle East.

In the events of recent days and weeks, a new phenomenon has emerged that worries even more about open war.

It is an unbridled street violence perpetrated by both Israeli Arab and Jewish extremists, with several people being beaten to death.

Attacks and clashes of crowds and gangs have taken place in cities where population groups have previously been hailed for living side by side in peace.

Property has been destroyed in the Arab and Jewish town of Acre. Photo: Jalaa Marey / AFP / Lehtikuva

This has even led to fears of a civil war that would profoundly change the nature of the conflict.

Even the foundations of the entire state of Israel being painted are in jeopardy.

- The Civil War would be a threat to our existence, more than all the dangers from outside, said Israeli President Reuven Rivlin.

The most concrete example of the events is the violent assault on a live broadcast on an Israeli TV channel in Bat Yam near Tel Aviv.

The video can be watched on the spot.

There was an Israeli far-right protest in the city on Wednesday night as a crowd attacked the man driving the car.

This was interpreted to be Arab in appearance, and the driver was accused of trying to drive over the protesters.

However, based on the videotape, it seems more like the driver is trying to escape the crowd.

The man was torn from the car to the ground and kicked.

Eventually, the man lay in his blood on the ground before being rescued by rescue personnel and authorities.

A man beaten by far-right Jews was lying on a street in Bat Yam near Tel Aviv on Wednesday night.Photo: AFP / Magazine

Police are nowhere to be seen, the TV reporter is heard saying in the video in Hebrew.

The Times of Israel reported that Jewish gangs also roamed the streets of Haifa and Tiberias, shouting “death to the Arabs”.

An Arab man was stabbed in a market hall in Jerusalem.

Quite the same has happened the other way around, when Arab gangs have beaten outsiders as Jews.

A 30-year-old Jewish man was seriously injured in Acre when a crowd tore him from his car, beat him with metal sticks and threw stones.

Two Jewish civilians and one police officer were shot in Lodi, and a rare, night curfew was declared in the city due to clashes.

Local Jews are said to have fearfully avoided speaking Hebrew in Arab settlements.

- There is complete anarchy here, comments a man who came to the city to support the Jews to the Washington Post.

In addition to Bat Yami, Acre, and Lodi, there have also been riots, at least in Haifa, Tamra, Tiberias, Ramle, and Rahat.

According to experts, social media and instant messaging services are also a new feature of extremist violence, where groups share their material and organize.

As early as April, Israel was rocked by a Tiktok video in which a Palestinian man beat and slandered an Orthodox Jewish man on a public transport in Jerusalem.

Other videos of Jewish harassment soon appeared on the video service.

Jewish extremist groups, meanwhile, are said to use WhatApp messages to organize their countermeasures.

Both Tiktok videos and group messages are feared to further fuel the conflict and act as an activation channel, especially for young people who use them diligently.

The ongoing Israeli-Palestinian conflict erupted late last week as protests in Jerusalem evicted Palestinian families from the settlement, and Israeli police fired tear gas at the Al-Aqsa Mosque, one of the holiest sites in the Muslims.

Hamas, which ruled Gaza, then launched attacks on Israel.

A Palestinian girl was walking on a street in Hamas-controlled Gaza where an Israeli air strike had previously destroyed a building. Photo: Naaman Omar / ZUMA

Street violence is another phenomenon in the same controversy.

Prime Minister Netanyahu has already used the phrase that Israel is in a “two-front war”.

Netanyahu's policies have been accused of inciting controversy in recent years, as Palestinians have experienced their rights being trampled on more and more.

Israel is believed to be able to eventually defeat Hamas resistance in Gaza, but it may be more difficult to tackle the rampant street violence.

In a conflict, it is important to distinguish between the terms Israeli Arabs and Palestinians, although sometimes they mean the same thing.

Israeli Arabs refer to a population group that remained living in Israeli territory alongside Jews after the establishment of the Jewish state in 1948.

They make up 21 percent of Israel’s population, or about 2 million, and about 80 percent of them are Muslims, the rest are Christians or Druze.

They have Israeli citizenship and political rights, but no compulsory military service.

However, the majority of Israeli Arabs see themselves as Palestinians in much the same way as the Arab population that ended up in the West Bank, Gaza and neighboring countries as a result of the wars, and their descendants, who do not have the same rights.

Many Israeli Arabs also say their position has weakened, which is a catalyst for protests.

"Our integrity is crumbling"

Israel is now seriously concerned about the escalation of inter-ethnic tensions that the Arab population and Jewish extremists are feared to incite.

Cowardly government ministers saw what happened when racist La Familia gangs attacked in Lodi yesterday, but dared not say anything, he said, referring to the infamous far-right football hooligan group.

An Israeli far-right activist injured in the riots was taken to hospital in Lodi on Thursday. Photo: Oren Ziv / AFP / Lehtikuva

- Jewish and Arab rioters have declared war on Israel, he tweeted, according to the BBC.

Israeli Arabs prepared for a confrontation with the far right in Lodi on Thursday.Photo: Ahmad Gharabli / AFP / Lehtikuva

Many Israeli cities have so far been downright proud of how they have shown that Jews and Arabs can live together.

It has been a small seed of hope in an otherwise inconsolable situation.

- It looks like everything we have worked for would collapse, comments Maisam Jaljuli, an Arab activist interviewed by the Washington Post.

- People no longer have tolerance.