According to Kekäläinen, the lack of self-confidence is the biggest problem during Laine's difficult period. 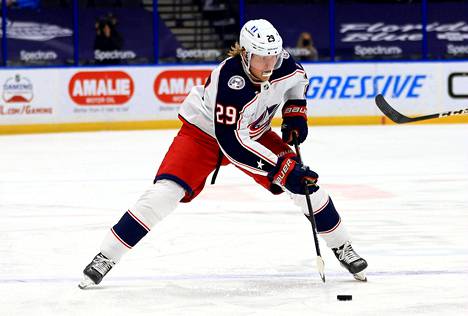 The gloomy season at Columbus Blue Jackets ended the weekend for the division’s jumbo spot.

Like the whole team, the season of Patrik Laine, who was acquired as the number one gun in the Blue Jackets in January, was also gloomy.

The wave game didn’t start rolling in the desired way at any point.

At his closing media event on Monday, GM Jarmo Kekäläinen presented his views on the Laine season, among other things.

- I don't think his skills have gone anywhere.

He is 23 years old, which is easy to forget because he has been in the league for so long, Kekäläinen said.

- I'm pretty sure no one is as disappointed with Laine's season as Laine herself.

Kekäläinen had a clear opinion about what Laine was most up to.

- The biggest problem in playing him was self-confidence.

A guy with skill no matter how much he lost the discs, even though no one was near.

I think that speaks volumes about the loss of self-confidence.

Work outside the ice in the summer, return here in peak condition and restore self-confidence to the level it is used to seeing.

Wave’s contract ended, but as a limited free agent, his rights remain with Columbus.

According to Kekäläinen, it is “self-evident” that Laine will be the cornerstone of Columbus in the future as well.

In his media conference, Kekäläinen emphasized that this exceptional period in every way will not be “over-analyzed” in Columbus, but that the future and return to the “own level” will now be built.

Although the tube of the four playoffs was broken, the Finnish boss did not consider the season a collapse compared to the previous one.

- It was obvious how we went after the transfer limit.

Half of the team left with a turn or injuries.

When played in an eight-team division where six had a chance to make the playoffs, the impression was ugly.

That was a pretty obvious thing, and we knew it.

- This has been a pretty difficult year.

Not only on the ice but also outside it.

The whole protocol and everything related to it, Kekäläinen said.

Kekäläinen is facing a summer of big decisions.

Among other things, he has three first-round booking shifts at his disposal, with which he can book top promises but also rub shops - for example, from the much-needed first center.

However, the most significant decision is likely to be the hiring of a new head coach, as John Tortore, who coached Blue Jackets for six seasons, will not continue in his wash.

According to Kekäläinen, the search process for a new head coach has started, but there is no hurry to appoint a new pilot.

According to Kekäläinen, the most important criteria for a new coach are leadership and strong values.

The experience, he says, is good, but not a necessity.