The Philippine foreign minister verbally ordered the Chinese to disappear. Relations between China and the Philippines tightened again in the spring when Chinese fishing vessels appeared on a disputed archipelago in the South China Sea. Satellite imagery revealed that numerous Chinese fishing vessels had accumulated at the end of March to protect the Whitsun Reef. According to the Philippine Coast Guard, there were as many as 200 ships, more than ever before. The Philip 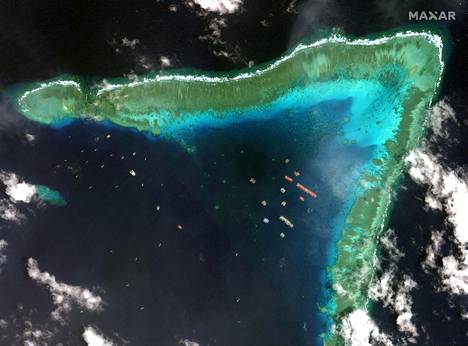 Relations between China and the Philippines tightened again in the spring when Chinese fishing vessels appeared on a disputed archipelago in the South China Sea.

Satellite imagery revealed that numerous Chinese fishing vessels had accumulated at the end of March to protect the Whitsun Reef.

According to the Philippine Coast Guard, there were as many as 200 ships, more than ever before.

According to China, the ships had sought refuge near the reef from the storm. Photo: Maxar Technologies / REUTERS

In early May, Philippine Foreign Minister Teodoro Locsin posted a post on Twitter that has since been deleted, explicitly urging the Chinese to “suck the fuck” out of the area.

He later clarified that harsh words are needed because traditional diplomacy has not worked for China.

For years, China has spread its influence off the coast of the Philippines by militarizing small reefs and atolls in the Philippine EEZ.

Among other things, it is feared that China will seek to control shipping routes that are strategic for global cargo traffic.

In addition to the Navy and the Coast Guard, China uses paramilitary forces to pretend to be fishermen.

They are called “little blue men” in reference to the unidentified military forces used by Russia in connection with the conquest of Crimea, which were called little green men.

The Pentagon calls the troops a naval militia of the Chinese People's Army.

- These troops are not fishing.

Their ships have reinforced hulls and automatic weapons and are very dangerous with short range.

In addition, the vessels have a top speed of 18 to 22 knots, making them faster than 90 percent of the world’s other fishing vessels, Carl Schuster, former head of U.S. military intelligence, told CNN.

The paramilitary forces are integrated into the Chinese fishing fleet, the largest in the world with more than 187,000 vessels.

However, the number of armed ships is not known, Western experts say.

“The navy is a key part of the Chinese People’s Army,” American experts Conor Kennedy and Andrew Erickson pointed out in their report to the U.S. Navy Naval Academy 2017.

“They are a state-organized, developed and controlled unit that operates under the direct command of a military command, carrying out activities supported by the Chinese state,” the researchers wrote.

The United States has responded to China’s challenge by sending its own ships and aircraft to the South China Sea.

The commander of the U.S. Navy’s Seals Special Forces said in early May that it would focus its future efforts on the fight against terrorism against the “sea threat” posed by Russia and China.

Britain will also strengthen its presence in an important maritime area by sending a fleet of aircraft carriers later this year.

- I want to inform China that we do not want difficulties or war.

But if they ask us to leave, then the answer is no.

The United States and the Philippines have accused China of illegally erecting buildings on the Spratly Islands, which includes Whitsun.

The International Court of Arbitration in The Hague issued its 2016 ruling in a maritime dispute between the Philippines and China.

According to the decision, China has no historical right to claim areas within the so-called nine lines for itself.

According to China, many reefs, shoals, islets and uninhabited islands far into the South China Sea belong to its territorial waters.

If that were the case, the country would be able to exploit the region's natural resources, for example.

China’s demands are based on the so-called nine-dash line drawn in 1947, which touches the Philippines, Malaysia and Vietnam.

China has not accepted or recognized the decision of the Hague tribunal.