Where and when will China's reckless launcher fall? This is all known now

The rocket and its cargo were launched on April 29 from the Wenchang Space Center in Hainan Province. 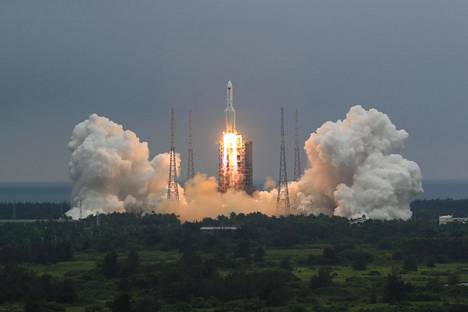 A Chinese launcher traveling uncontrollably towards Earth is predicted to hit Earth on a night between Saturday and Sunday or Sunday morning Finnish time.

All this about its journey is now known.

What the heck is Long March 5B?

Long March 5B is China's largest rocket and currently also one of the largest in the world.

Its mission was to carry into space the main module of China's newest space station, the Tiangong 3, which will be completed next year.

The rocket and its cargo were launched on April 29 from the Wenchang Space Center in Hainan Province.

The smaller launchers detached from the whole shortly after launch and, as expected, fell into the Pacific Ocean.

The empty part of the rocket, weighing 18–22 tons, continued its journey, taking the space station module into orbit.

Why does the rocket fall uncontrollably?

The phases of the rockets that have progressed into orbit have in recent decades worked so that their engine restarts after being unloaded.

In this case, they separate from the orbit and fall as planned either to uninhabited areas or in the middle of the sea.

China chose a different way to launch it, and after exiting the space station module, the Long March began orbiting the Earth in an unusual orbit and gradually losing altitude.

The flight altitude of the rocket has been reduced by the friction caused by air resistance at the top of the atmosphere.

The exceptional flight path has made it impossible to predict the exact time and place of landing.

According to a statement from the Chinese Foreign Ministry on Friday, most of the rocket is likely to return to the atmosphere as it approaches the ground, leaving a small chance of damage.

Where and when will the rocket fall?

The rocket can basically drop anywhere between 41.5 north latitude and 41.5 south latitude.

At least the rocket will not fall on Finland, because Finland is located further north, between its 60th and 70th northern latitudes.

It is considered likely that parts of the rocket that may not burn when they hit the atmosphere will fall into the sea.

The earth is 70% water, so falling into the sea is likely.

"We hope it (the launcher) will land where it won't hurt anyone," said U.S. Department of Defense spokesman Mike Howard.

Various calculations have been made of the place of fall.

The predictions become more accurate as the rocket loses altitude.

The Aerospace Corporation, which conducts research and development funded by the United States, calculated that the rocket would land in the Atlantic at 7.30 a.m. Finnish time.

There is four hours of flexibility in each direction.

Earlier, the same organization had speculated that the rocket would fall into New Zealand’s sea area.

However, according to the Aerospace Corporation, it is possible for a rocket to fall anywhere in the area that covers much of the southern hemisphere.

According to a forecast by the Russian space agency Roskosmos, the rocket would fall south of Indonesia into the Timorese Sea on Sunday after 2.30 am Finnish time.

A recent forecast was also released on Saturday by the EU's SST (Space Surveillance and Tracking) service.

According to it, the rocket would fall to the ground with a time fork that extends 190 minutes before and after 5.11 Finnish time.

According to this forecast, the fall time would therefore be between about two and a half o'clock on Sunday morning Finnish time.

Have Chinese missiles returned to Earth uncontrollably in the past?

What about rockets from other states?

This is not the first time that China has lost control of a returning spacecraft.

Its successor, the Tiangong-2, in turn, was restored from orbit in a controlled manner in 2019.

In May 2020, the second Long March rocket was partially destroyed when it returned to Earth.

Most of it ended up in the Atlantic Ocean, but scrap also flew to Africa in the area of ​​villages inhabited by Côte d’Ivoire.

The hit caused material damage, but no one was killed or injured.

CNN says it flew directly over Los Angeles before falling into the sea.

According to the Washington Post, China is planning another ten launches to take parts of the new space station into Earth's orbit.

According to Spacenews, the largest and most well-known uncontrolled landing occurred in 1979, when Nassa’s 76-tonne Skylab scrap spread over a wide area of ​​the Indian Ocean and Western Australia.

In 2018, it was reported that, according to the European Space Agency (ESA), 6,000 large objects have been thrown uncontrollably to Earth over the past 60 years, but none of them have posed a danger to humans.

Astrophysicist Jonathan McDowell of the Harvard-Smithsonian Center for Astrophysics does not find the situation this weekend particularly worrying.

However, he believes that China needs to change its approach.

“The fact that a huge pile of shards of metal is flying towards the Earth at hundreds of kilometers per hour is not a good course of action, and China should shape its Long March 5B flights to avoid this.