Biden praised his administration’s corona efforts and unveiled its plan for a comprehensive support package aimed at alleviating the country’s economic inequality. 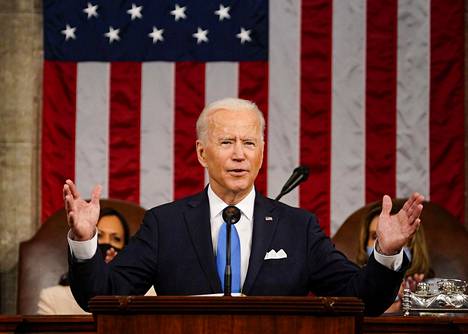 In the United States, President Joe Biden described in his speech at the first joint session of Congress that he inherited a nation in crisis.

Now, however, the country is, according to Biden, once again moving forward and turning adversity into a resource.

Biden spoke at local time on Wednesday night about his goals and intentions in a joint congressional session.

Among other things, the president highlighted his extensive corona subsidy package and praised the U.S. corona vaccination program.

According to Biden, more than 200 million doses of coronavirus vaccine have been given in the country since he took office.

According to news channel CNN, the U.S. Centers for Disease Control (CDC) has reported nearly 235 million doses of coronary vaccines in the country to date.

While taking the oath of office, Biden felt he had embraced a pandemic and an economic crisis, among other things.

Thursday will be a hundred days since Biden took office.

- Now, after only a hundred days, I can tell the nation: America is on the move again, Biden announced on Wednesday, receiving loud applause.

In one of the main points of the speech was Biden's plan for a nearly two trillion-dollar support package, with which the administration aims, among other things, to alleviate the country's economic inequality.

Biden plans to fund its massive support package by reversing tax cuts for the richest by its predecessor Donald Trump.

Biden said Wednesday that U.S. companies and the richest people have to pay their "share" in higher taxes.

With the reforms, the income tax ceiling would rise to its former level of 39.6 percent during Trump’s time from 37 percent.

However, taxes for those earning less than $ 400,000 a year would not increase, according to the administration.

In addition to tax increases, the administration aims to close loopholes that have allowed the country’s wealthiest to evade their tax obligations.

The package would also increase the budget of the country’s tax administration to give it the resources to investigate major tax evaders.

Support from the people, but not from the Republicans

According to a White House official, Biden’s plans have widespread support among Americans.

- The reforms are fundamentally about justice, an official who commented on the support package anonymously told reporters.

However, Biden’s support package calls for the support of a deeply divided Congress rather than the people.

Democrats have a majority in both the House of Representatives and the Senate, but in the latter, the majority position is subtle and relies heavily on Vice President Kamala Harris to act as a decisive voice in a dispute, if necessary.

Senate Republican leader Mitch McConnell, in a speech on Wednesday, called on the White House to take a nap from leaving a "broad socialist legacy."

He further accused the Biden administration of acting in sync with the "radical left".

Police reforms by the anniversary of Floyd's death

Biden also commented on police violence and the treatment of black Americans.

The president said he wanted police reforms to mark the death anniversary of the death of George Floyd, who died last May.

“We’ve all seen an injustice on the neck of black Americans,” he said.

He said he talked to Floyd's daughter.

This described Biden, according to his father, as changing the world.

Biden noted that this is how Floyd moved, as long as the United States ensures that the country takes steps to improve the situation.

He said the United States is not seeking conflict with China, nor is it seeking to escalate tensions with Russia.

However, Biden said he told Russian President Vladimir Putin that the actions would have consequences.

Biden arrived in the Chamber of Deputies on Wednesday with a mask on his face and struck down the aisle as he walked his fist greeting together with several politicians in the audience.

For his speech, however, Biden removed his face mask.

The speech was also historic in the sense that during the speech, two women were sitting behind the President, Vice President Kamala Harris and Speaker of the House of Representatives Nancy Pelosi.

No president has ever said those words about this podium.

And it was time, Biden said.

Instead of the traditional 1,600 politicians and guests crammed into the House of Representatives on Wednesday, about 200 pre-selected people were listening to Biden’s speech in the Chamber.

Security measures at the Capitol have been extensive since Trump supporters invaded the House of Congress as an Epiphany.

The source is also the news agency AFP