The Netherlands is becoming more flexible, and that is causing the necessary discussion

The Netherlands is slowly turning its back: from today there will be various relaxations, such as the disappearance of the curfew and the reopening of the terraces. A conversation between six people from West Brabant. "If I can go somewhere by putting a stick like that in my nose, I will." 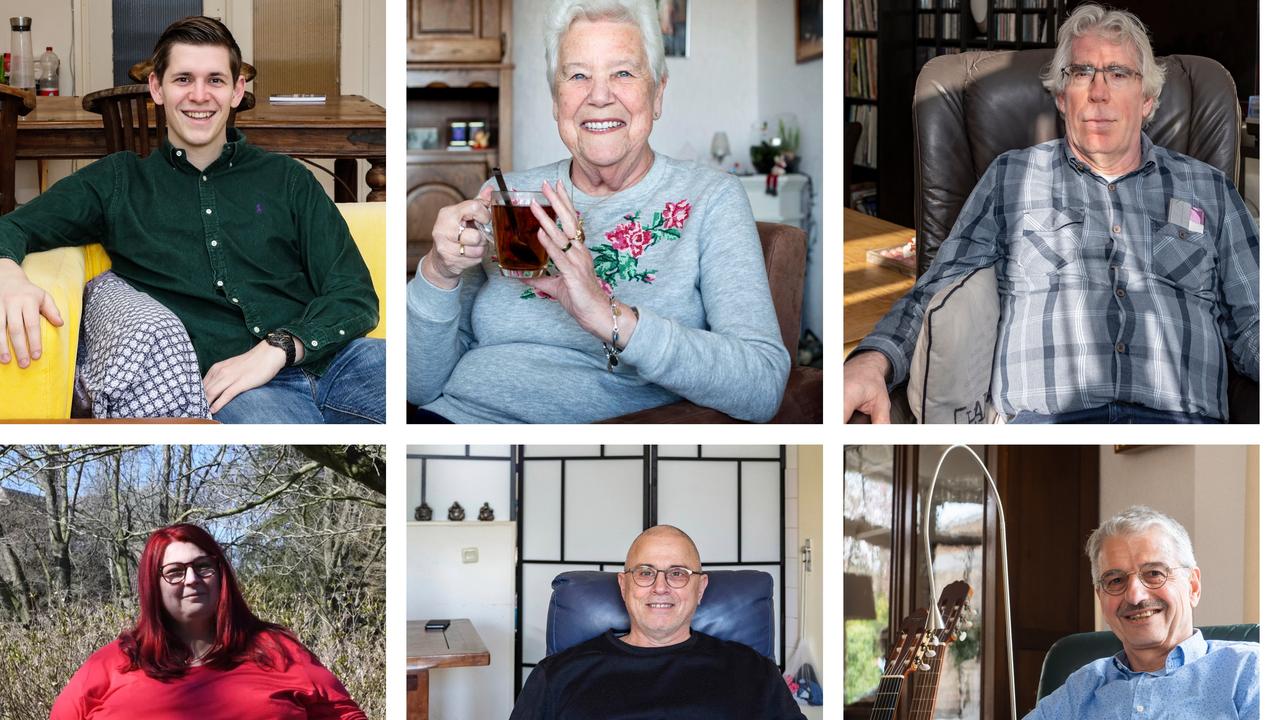 The Netherlands is slowly turning its back: from today there will be various relaxations, such as the disappearance of the curfew and the reopening of the terraces.

A conversation between six people from West Brabant.

"If I can go somewhere by putting a stick like that in my nose, I will."

This article is from BN DeStem.

This is the best way to describe the second meeting of this panel.

A conversation with contradictions.

For example, the new panel member Henk Ligtenberg (68) has received an invitation for a vaccination, but he is refusing to go for the time being.

While Jos Kools (58) cannot wait: "If my doctor has an AstraZeneca vaccine left, I say: inject."

Yolan Pajak (49) is in favor of a vaccination passport.

While 79-year-old Mariëtte Schellekens believes that this limits her freedom.

"We experienced something like this during the war, that was not nice."

Together with Yoeri Martens (21) and Fred van Gaans (58) they have a frank conversation.

As of Wednesday, the curfew will be canceled, terraces and shops may open under certain conditions and more visitors are allowed at home and at funerals.

Who goes straight to the terrace?

"I stay at home. Since the start of the corona crisis I have been largely in my own bubble. If all goes well, I will get my injection at the beginning of May. Then I feel more comfortable on the street."

"I really like a beer on the terrace. But looking at the number of infections, I am still not comfortable with it."

"Nothing has been planned yet, but if it turns out like this, I will. I think that if you are healthy and have no underlying things, the chance that you will become ill is a lot smaller. And you have less fear. to be."

"I agree with Henk; I have never seen myself as a risk group. I have not booked the terrace yet, but when I am in Zeeland for the weekend, I will definitely sit at a beach club. I am also very happy with the relaxation. That I and my fellow students can go to university one day a week again. "

"When I see that there is a place available on the terrace at my favorite restaurant, I will sit down for a while. I can manage, I have a big social bubble. I am sometimes a bit civil disobedient and also have fun during curfew still have a drink with my neighbor in the flat. I would like it if the borders were opened again, then I could see my children. "

"I would also like it if I could go back to Belgium, where my very best friend lives. I do a lot of digital work, yet I occasionally need a deep conversation without a screen."

In recent times, people could go to the theater, museum and casino if they had themselves tested beforehand.

"I don't feel like being tested just like that to go somewhere. Then I'd rather stay at home."

"If I look at a 538 party like that, I wouldn't be tested for it voluntarily, but I wouldn't go there either. I think such a large crowd is still too much. I don't have a good feeling about it. such a nice test. "

"So neither do I. That young people want to go to a festival with a test, that's fine. You can't keep things completely locked up. You have to go outside together."

"If I can go somewhere by putting such a stick in my nose, I will. As a youngster I would like to be a guinea pig. I have not yet participated in such a test event myself, but I would I don't mind taking a little more risk. "

Yoeri Martens: 'As a young person I really want to be a guinea pig.'

Yoeri Martens: 'As a young person I really want to be a guinea pig.'

Put a cotton swab in your nose at home to know if you are infected with corona.

The self-test, available at pharmacies and drugstores, should provide more freedom.

Who has already used one?

"I recently just to be on the safe side. Wouldn't do it every week, always 5 euros at the Kruidvat is expensive. I have a well-paid job, but it would not be fair if I could have myself tested to death everywhere. to go, and someone with less financial scope not. "

"Such a self-test gives false security. The sharpness goes off, at least for me. After such a test, it suddenly becomes 1.5 meters 1 meter. I better stay away from that."

"I am absolutely against these tests. Who benefits from it? Only the pharmaceutical industry that sells the tests. It is ridiculous that the Minister of Health is advertising the tests, and at the same time says: they are less accurate. just money beating? "

"Henk has a point. And: how do I test myself? Do I put that stick in my nose properly?"

Jos Kools: 'A self-test like this provides a false sense of security.'

Jos Kools: 'A self-test like this provides a false sense of security.'

The Netherlands has started with the Janssen vaccine.

, 60-year-olds are no longer punctured with AstraZeneca.

"I have received an invitation, but I will pass the vaccination. In my opinion I do not fall into a risk group, although I am 68 years old. In my opinion it is better to vaccinate on the basis of health risks than purely on age. I say to people who do want a shot, I say: do it. I myself go to a recognized additive doctor. He saw in someone who has been vaccinated that there was, among other things, agricultural poison and aluminum in the body. "

"Henk, as a chemist you can read what is in such a vaccine, right?"

"These are a lot of additives and proteins, but apparently also a concentration of agricultural poisons."

"You have found studies of that?"

"My natural doctor has established that."

No, I'm talking about academic studies based on science. I think this is quite a statement. It's a shame that this kind of information is being disseminated without substantiation. I think vaccination really is the solution.

"What I want to say is that there are several perspectives. Corona drugs have been dismissed as quackery by the Minister of Health, without his having any medical background."

"Henk is free to say something about the vaccination. But he is talking about a one-man, while entire research teams are involved in the vaccines. I would not give a big trumpet to such a person here."

"Only one thing is important to me: the difference between whether or not to end up on the IC. That's what the vaccination does. If my doctor has an AstraZeneca vaccine left, I say: inject."

"I do want a vaccination. Which one, I don't really care. I think the noise about possible side effects is a pity, but more people die from corona."

Henk Ligtenberg: 'I have received an invitation, but will pass the vaccination by.'

Henk Ligtenberg: 'I have received an invitation, but will pass the vaccination by.'

At the European level, work is being done on vaccination passports and test certificates in

order to gradually open up society.

With such proof, people would be able to go back to the cinema, the restaurant or on vacation.

"I am in favor myself. It feels safe for me to be somewhere with a co-vaccinated person."

"If I am only welcome somewhere with a passport, I already start to prance. I have no problem with it if I and other young people can also use a test certificate until we are vaccinated."

"As long as we are in this pandemic, testing is the only thing that gives a little bit of certainty. I have no confidence in such a passport, it provides a false sense of security."

"I find it scary. That such a passport is used to get people under their thumb. To decide what we are allowed to do. We experienced something like this during the war, that was not pleasant. Even if I both prick my teeth. I won't go down the street cheering and hugging everyone. "

When will you stop being careful?

"I expect that caution will continue. When I see a bus with tourists, I will stay a bit away. I don't think I will go on holiday far anymore, it is also beautiful close by."

"I look at it from day to day. Then I don't have to worry about tomorrow."

"I completely agree, Mariëtte. People say that they are only allowed to do this or that, is not a good society. The current vaccination passport is also not an official document, nothing has yet been arranged in that area."

"I have trouble with the passport, disclosing my personal data. I live in the Netherlands, I already have freedom."

"Such a passport would actually give me more freedom."

"For me that feels like a dictatorship. And after what I went through during the war, I say - in Amsterdam style: I just give up. I want to be vaccinated and be careful, but may I please again? life?"

Fred van Gaans: 'I have trouble with the vaccine passport.'

Fred van Gaans: 'I have trouble with the vaccine passport.'

We are curious about your opinion on this article.

Leave your feedback via this link or mail to contact@nu.nl.