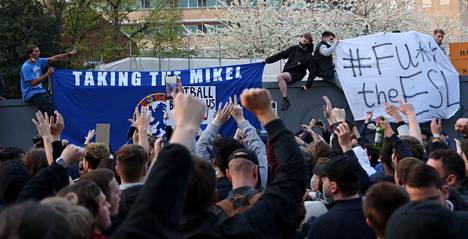 Happiness either is or it is not.

Now for him bounce football.

However, the situation was reversed with vaccinations.

In the British, AstraZeneca, the “Oxford vaccine,” was not carded.

At the same time, the popularity of Johnson’s Conservatives turned to growth.

Raised as a Labor rescuer, Keir Starmer doesn’t know exactly what he would do.

Johnson became prime minister as a supporter of Brexit.

The economic difficulties of the euro gap are entangled in the shocks brought about by the pandemic so that no one can distinguish them.

Johnson was accused of outright lying about the matter.

The break-up of Britain into its parts is feared as the Scots increasingly shed England.

This week we went to the hill again.

The British got more important thinking.

The foundations of the nation are under threat.

Boris Johnson rushed to the rescue like a rabid bull.

The prime minister could have reasons other than pure football fanaticism.

The dreams of businessmen

The six most important Premier League teams in England and a number of top Spanish and Italian clubs announced the formation of a new Super League.

The face of the project is Andrea Agnelli, President of Juventus in Italy, and Florentino Pérez, President of Real Madrid, Spain.

The funding was to come from the United States.

With the exception of Tottenham, their main owners are not from the British Isles.

Especially for American businessmen who have invested in clubs, English football has been disappointing.

The top league in the Premier League is a polished slot machine with television contracts.

But even big teams may not always succeed and get into the coveted European games.

They can basically even drop out of the league.

There is no such danger in the top U.S. sports leagues, where league seats are owned.

Business people felt they had to take unnecessary risks.

Johnson’s board invented every possible barrier that could be put in place.

The basic idea of ​​European football is that any team can rise from years of hard work from the sub-series to eventually win the Champions League.

In practice, this is not the case, but the principle is paramount.

The Super League lifted the continent through a huge rage.

Even UEFA, which went from one corruption mess to another, once looked good.

Johnson, the British government and parliament, played a crucial role.

Without English teams, the most prestigious Italian and Spanish clubs were left orphaned devils.

Johnson’s board invented every possible barrier that could be put in place.

If suddenly invented means had to be used in practice, it could have been awkward.

In the British Parliament, the matter received the undivided support of all.

Many believe that the same determination at the beginning of the corona pandemic could have saved the lives of tens of thousands of Britons.

At the outbreak of World War II, Hitler was certainly not as uncompromisingly opposed in Parliament.

Of course, fans who burned club clothes in front of the stadiums also did their part.

A battle for the soul of the fans

In England, football is the cornerstone of national self-understanding.

The British Empire went, and Britain is already cracking on its home island.

But football remains, although the national team's success has been the last reports half a century quieter.

The smaller the locality, the more important your own club is.

Of course, it’s nice if the club plays in the Premier League, which opens the taps.

Football started as a working class game and still is, even if not everyone can afford expensive Premier League tickets anymore.

In the northern parts of England are the most tenacious areas of support for the Labor Party.

From there, even Margaret Thatcher didn’t get labor eradicated in her best days.

However, Brexit undermined the legacy of generations.

In the last parliamentary election, many elected Johnson Conservatives for the first time.

Experts were of the opinion that the EU difference would not help the Dunners, but experts are no longer used to listening.

For the football clubs of small and medium-sized communities in the north, the Super League would have meant decades of almost impossible dreams becoming truly impossible.

The fruits of victory can be redeemed in the upcoming election.