Johanna Matintalo and Lauri Vuorinen in a joint interview

Johanna Matintalo and Lauri Vuorinen have been dating for eight years. A couple glowing with happiness admits that coexistence between two goal-oriented athletes is not always easy. 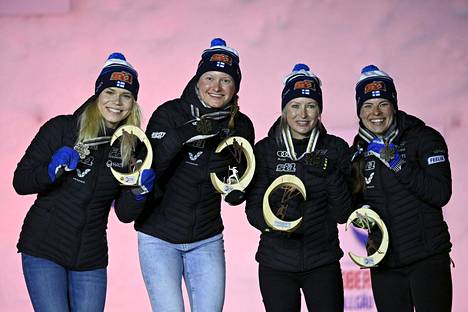 Lauri Vuorinen, who is recovering from a shin surgery, is rushing to the finish area of ​​the Ruka ski stadium, where Johanna Matintalo, who was third in the final of the Finnish Cup final race, is still breathing.

- That was a good bet, Vuorinen cheers happily and applauds his beloved gently.

The ski stadium is the job of the young couple, but their story also started on the trail.

Matintalo and Vuorinen met while practicing in the same group nine years ago.

At first there was only sincere camaraderie between them, but after knowing the year, there was more to the air than sibling cries of encouragement.

They started dating and fell in love.

The couple moved to a shared home in Rovaniemi in 2016 after living a long-term relationship for more than three years.

- I don't remember exactly what happened there anymore, Vuorinen, 26, secretly goes through the acquaintance phase.

In the middle of the last decade, Vuorinen and Matintalo were only ski promises that had sought the milestones of their sports careers;

now Finnish champions and perennial members of the national team.

- It hasn't been shown in my life in an insanely concrete way yet, but that's a great thing now.

It was kind of a boost to my own career and my status as an athlete, he says.

So the work continues where it used to be - and it is ruthless.

In a couple’s love nest, everyday life is most often precisely scheduled and ascetic.

Vuorinen and Matintalo run the same trails from day to day.

- We are so much together and we live a similar everyday life that fortunately our chemistry meets so well.

We sometimes laugh at myself that it would be an eight-hour day after which I could come home and see Laurin for a long time.

Really we’re separated every day for a couple of hours, and then again we’re home and we have lunch facing each other, Matintalo laughs.

Ville Oksanen, who coaches both, tires the training programs so that the training rhythms and rest days of Matintalo and Vuorinen coincide.

There is still not too much looting time.

- After all, we don't have terribly anything to do with non-skiing.

In skiing, the bubble is so fierce.

This is not a Monday to Friday profession.

As such, our daily lives are quite different from many others, Vuorinen says.

In their free time, the ski couple also seeks stimuli from outside the sport.

In their spare time, the heartbeats try to come up with something to the best of their ability that is not related to age-old skiing or speculation about it.

At the dining table, the aim is to find other topics of conversation than to analyze the ankle angle in a skating kick.

- On rest days, we order some good food and watch a movie - or if we’re on a really active site, either one can even prepare a slightly better meal.

There is not much else that can be done during the Korona period, says Vuorinen, who is from Perniö.

Unlike many other peers, the apartment is not loaded on Sunday with stuffy pizza boxes and parquet with embarrassingly sticky beer cans.

- A couple of times a week you can eat a little heavier, and we are not absolutists either.

You can't afford to go to a party at this level, but if you ever want to use alcohol, then outside the race season, Matintalo says.

- You can take a sauna beer sometimes, but you can't do much more.

In the spring you can sometimes sit with a glass of wine even more, the spouse accompanies you.

Vuorinen and Matintalo are by no means the only lovers of trails.

Top skiers mate with each other quite diligently: examples can be found in Finland and abroad.

According to Vuorinen, the best thing about professional athletes in the same sport living together is that they both understand what it takes to get to the top and stay there.

- Few outsiders realize how much dedication and sacrifice this task requires every day.

There is no need to explain them to Johanna.

At the same time, a common passion is also the worst side: we are constantly in the same gangs and under the same roof.

Sometimes disputes arise from a very small point, even if they are settled quickly.

On the flip side, there are also emotions that are sensitive to sports.

The most difficult moments are when one skier who rejoices in his success and another who is disappointed in the low of disappointment returns home from a race trip.

- Sometimes it requires quite a balance in order to be able to support and rejoice in the success of another, even if you are in the country.

For example, last season Johanna was sick for a long time and I was sick.

A mountain swing in the sprint qualifier of the World Championships in Oberstdorf.

She placed 15th in the race. Photo: Emmi Korhonen / Lehtikuva

In Matintalo's opinion, a partner who cherishes balance or not, is a huge resource.

She suspects that while socializing with Tavis, one would have to constantly wonder if the spouse enjoys a common everyday life when life is built so much on his terms.

- Even though I spend my time terribly focusing on my own sports career, I don’t feel like Laurin should make sacrifices in her own life because I want to live like this.

We feel it is fair because we go on both terms.

Matintalo believes that common dreams and goals have not only strengthened the relationship but also paved the rocky road from a young athlete to the top of the world.

- Together we have grown from promising juniors to adult successes.

We have received terribly peer support and faith in what we do on a daily basis.

It would have felt really difficult and strange if I had to go through this journey without Lauri always being by my side.

I don't know if I could have done that.