Countess Sophie visits Windsor Castle with her husband, Prince Edward - comments on the situation of the Queen of Tears 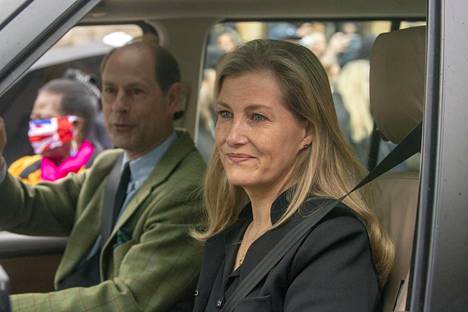 Queen Elizabeth is currently in the midst of great grief over the death of her husband, Prince Philip, on Friday morning.

There was a small commotion in front of Windsor Castle on Saturday as the Queen’s youngest son, Prince Edward, left the scene with his wife, Wessx Countess Sophie.

Edward and Sophie were seen arriving about an hour earlier for a short visit to the mourning court.

The Countess is known to be very close to the Queen. Photo: Steve Parsons / PA Images / MVPhotos

Countess Wessex drove past the media with the car windows open.

He agreed to comment briefly on the family’s situation, Sky News reports.

- The queen has been awesome, the Countess told the media.

According to Sky News, the Countess tears openly as she left the castle with her husband.

Prince Edward, meanwhile, waved to the people gathered at the scene as he drove his Range Rover out of the castle farms.

The Countess of Wessex is known to be very popular with the Queen.

- She is entrusted by the Queen and the relationship between them is quite different from that of other family members.

She is just like a daughter to her majesty.

They are so close, insiders have been alleged to the media a few years ago.

Edward and Sophie have been around for over 20 years. Photo: Zuma

Sophie has been married to the Queen's youngest son, Prince Edward, since 1999.

The couple has two children, Louise and James.