A Finnish diplomat received a gift during a visit to Finland by Queen Elizabeth and Prince Philip in 1976: “It has been on display in my home ever since”

At the invitation of President Urho Kekkonen, Eva-Christina Mäkeläinen was able to receive royal guests in Åland in 1976. 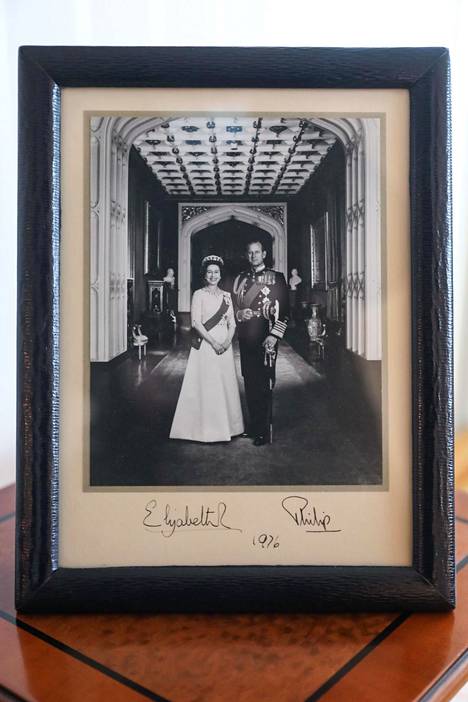 Eva-Christina Mäkeläinen, who has had a long career at the Ministry for Foreign Affairs, has a rare photograph at home.

At the bottom are the signatures of Queen Elizabeth II and her husband, the Duke of Edinburgh, Prince Philip.

The 85-year-old diplomat received a photograph from the British Royal in 1976 when they visited Finland.

Mäkeläinen, who worked as an assistant protocol manager at the Ministry for Foreign Affairs, belonged to their party.

- It has been on display in my home ever since, says Eva-Christina Mäkeläinen.

- It’s a big beautiful picture where both are in festive outfits.

Their signature is below the picture and reads Elizabeth R and Philip 1976.

-It's a big beautiful picture, where both are in festive outfits.

Their signature is below the picture, and it reads Elisabet R and Philip 1976, says Eva-Christina Mäkeläinen. Photo: Lassi Rinne

At that time, the time of President Urho Kekkonen was lived.

It was the first full state visit to Finland.

The British delegation had already visited in advance to map out a future state visit.

- It has been the custom in Finland to make state visits to the nearest millimeter.

When Mäkeläinen heard on Friday from the French news that Prince Philip had passed away, memories surfaced.

- I must say that at the top of their visit it was remembered that they were precisely the couple, Queen Elizabeth and Prince Philip.

How much value Elizabeth gave her husband that this supported her work.

- The visit has left a very warm and deep impression on me.

-My visit has left a very warm and deep impression on me, diplomat Eva-Christina Mäkeläinen recalls her meeting with the British royals.Photo: Kari Santala

President Kekkonen had sent a small party to Åland to receive the royal couple arriving by private plane.

- Philip was very interested in the Åland Maritime Museum, he says.

Mäkeläinen chatted with both Queen Elizabeth and Prince Philip.

- Of course we didn't talk for long.

They made a natural and human-like impression.

The royals became acquainted with Eva-Christina Mäkeläinen's long career as a diplomat.

The next day, the royals charmed the Finns in the South Harbor of Helsinki.

There was a huge crowd.

Shots of honor were shot.

Mäkeläinen was the protocol manager of the Ministry for Foreign Affairs until 1980.

Eva-Christina Mäkeläinen is a licentiate in social sciences and a doctor of philosophy.