Images of the prime minister are used in scams that have previously been seen on behalf of other public figures. 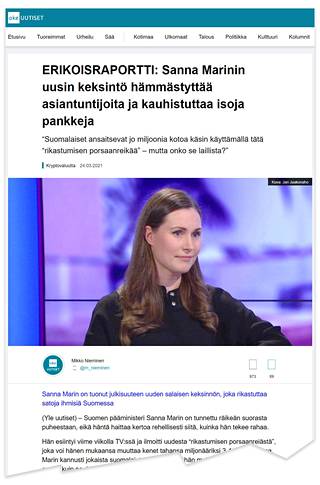 Images of the Prime Minister and fictitious statements are on display on at least two websites.

According to false news, Marin “reveals the enrichment loophole” before the banks close it.

The scam is similar to what has been seen before in the names of Antti Herlin, Matti Röngä, Sipe Santapuk, Jasper Pääkkönen and Hjallis Harkimo, among others.

In the first scam article, Sanna Marin is set to trade twilight investments on a site reminiscent of Yle news websites.

One of the articles is reminiscent of Yle's graphic look.

Another is also seeking news-like output.

The scam is about a service called Bitcoin Era, which is claimed to be an investment platform for cryptocurrencies and promises to enrich in 3-4 months.

The scam is not limited to fake news, as when Bitcoin Era google, the first search result is a plausible page called mutual funds.org.

The report “Teppo Viitala, Master of Laws” found on the website states that Bitcoin Era is an artificial intelligence robot that works as promised.

The aim is to strengthen the credibility of the scam by canceling false news about Matti Röngä's and Antti Herlin's investments published elsewhere on the investment fund.org website.

There are no references to Master Teppo Viitala elsewhere on the Internet, and his picture cannot be found elsewhere.

It may have been done using thispersondoesnotexist website, which creates real-looking human faces based on extensive imagery.

The article continues after the pictures.

When searching for more information about Bitcoin Era, Google is the first to offer Mutual Funds.org, which is part of the same scam network.

Screenshot from the site.

Looking at the picture of the expert “Teppo Viitala”, it is noticed that on the left side of his face there is a frame of spectacles, on the right not.

The image is most likely created on a computer.

Mutual Funds.org is part of a network that was originally built around the American company Inc. Inc.

The companies involved are also doing direct marketing of the alleged cryptocurrency trading over the phone.

In addition to the Bitcoin Era, other scam titles on the network include at least the Bitcoin Code, Bitcoin Revolution, and Bitcoin Evolution.

Another fake news is located on the Medium online platform, which is used for a wide range of blogging and publishing activities.

Leading expert Juha Pallaspuro from the emergency department of the Prime Minister's Office says that the number of similar scam attempts has increased considerably.

- These companies are likely to give only a narrow picture of the underlying crime.

Fortunately, awareness of scam attempts has increased and Finns are even more alert, Pallaspuro says by e-mail.

According to Pallaspuro, scams made on behalf of ministers are common and are dealt with on a monthly basis.

Inappropriate communications, intimidation and false profiles of ministers are observed on a weekly basis.

The motives may be teasing, money or intentional damage to the Minister's reputation.

According to Pallaspuro, in addition to their own observations, reports of scams come from citizens.

It is difficult to track down scammers and perpetrators because the activities are organized from abroad.

If the internet operator is known, the government will ask him to remove the fake account or other scam.

- The Government Preparedness Unit also reviews cases with other authorities to the extent necessary.

A criminal report can also be considered if the act is serious enough, Pallaspuro says.