The dream wedding is coming again! The bride cancels the wedding, the open wife initially gave the Kits ... - also included the first male couple in the history of the series

The popular Dream Wedding series will be continued in the spring. Even this season, the challenges that couples face before the h-moment are not avoided. 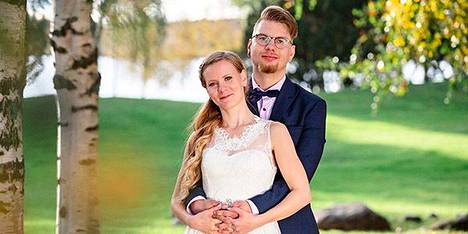 The enduring favorite Dream Wedding will be continued in April, when Discovery + will see eight love stories.

Even this season, the surprises that couples face when preparing for their wedding party from Helsinki to Ylläs and Tornio to Tampere are unavoidable.

In the fourth season of the program, for the first time in the long history of the format, it will be possible to follow the big day of a male couple who fell in love.

On the other hand, lightning love helps the bride to overcome severe depression, and the inauguration serves as an important symbol of detachment from the past.

The groom activates to marry after more than 20 years of living together, but the bride, who has been waiting for years, is no longer excited and gives the Kit while the rest of the family watches next door.

Problems are also not avoided closer to the h-moment, when a groom who is relaxed about life and weddings receives a harsh reminder of the seriousness of the situation when the bride cancels the wedding just three weeks before the wedding.

In the end, though, everything is fine again.

The touching stories of couples crowning the big day give love a seal, and a life together as a married couple can begin.

The tired bride withdraws her wedding just three weeks before the planned wedding, until the groom, who is lungist about life and wedding, begins to show interest in the big celebration after a serious conversation.

It is decided to hold the wedding anyway.

Minna Paloniemi, 27, who lives in Haparanda, 27, and Jarkko Romakkaniemi, 29, finally say the will on the Finnish side of the border town, Alatornio Church.

The end to this point began years earlier when the couple fell in love with each other.

However, the relationship was doomed to doom.

Years passed and children were born too, until the relationship between the two ran aground.

Years after the first admiration, the couple happened to meet in the same restaurant where they first met.

From that moment, a great love story began to develop.

At the beginning of their relationship, the lovers lived in different places and sadly weighed on their minds until Anssi finally got a job in Tampere.

When Anssi married Jirka one day on an outdoor trip in Pyynikki, she didn't have to think about her answer.

Anss also has clear tones in the wedding arrangement.

He takes and Jirka whispers, which in practice means that Anssi creates schedules and to-do lists and Jirka focuses on his own work.

It was lightning love, proves the bestman in his speech.

Just over two years earlier, a group of friends went to Ruka early in the morning, and the eyes of the two met.

It was the beginning of a story that culminates in a touching civil wedding in the flower splendor of Hatanpää Manor.

The first male couple of the dream wedding, Anssi Salminen, 27, and Jirka Tanttu, 36, embark on a journey together with compelling feelings of love and gratitude.

The preparations for the military wedding of Marika Kalho, 34, and Pauli Naukkarinen, 38, who met in Tinder, go smoothly until the problems start to pile up as the wedding day approaches.

Planning the table order at the party is not going to succeed at all, and other concerns will soon emerge.

The last few meters show that bestman has been exposed to the coronavirus, which may prevent his involvement.

Knowledge especially weighs on the groom working as a professional soldier, for whom planning is everything in everything.

Even so, the busy daily life of a family of four is guided by a daily reading schedule.

That’s what’s necessary, as the wedding couple is working shifts, and the school-age boys from both ex-relationships are busy.

With peak years lasting twenty years due to raising five children, running businesses and building two houses, there is no time left to court.

This was the case for Jani Ross, although open wife Mirva Naukkarinen reminded me of the promise of marriage year after year.

Mirva had already had time to settle for her fate as an open wife, until more than two decades after the relationship began, Jani surprised Mirva on Christmas Eve.

However, Mirva, who had been abandoned mentally, rejected the marriage.

Wedding preparations go well until the morning of the wedding day, but just a few hours before the wedding, it is revealed that the certificate of accessibility is lost.

Jani eventually has to head to the church without knowing if the couple will be officially married.

The ex-coworkers I met in Tinder had already arranged a date when, in his twists and turns, the nimble Toni began to make acquaintance with another woman as well.

However, he did not want to rotate many swings in the patterns, and therefore the meeting with Henna-Maarit was canceled.

When the swinging was over, Toni was encouraged to contact Henna-Maarit again and got another chance.

The couple, who live in their dream home in Jyväskylä, take care of their wedding arrangements in one inch.

On the wedding day, there is a wonderful anticipation in the air as the bride steps into the pier of an atmospheric party venue in her beautiful wedding dress.

There, in front of the priest, Henna-Maarit Kaustinen, 27, and Toni Heikkilä, 31, tell each other the will.

After the stubbornness of the beginning of the relationship, love ignited and obstacles to marriage happiness fell, and the journey as a married couple can begin.

The bride, who had recently divorced from her previous relationship, was convinced that she would spend the rest of her life with her two children without a man.

Even Tinder, recommended by a friend, didn’t hit at first.

Eventually, curiosity prevailed and the app hit the divorced father of one boy.

Then it was going!

In Ostrobothnia, wedding arrangements are not unnecessarily stressed.

On the eve of the wedding day, the parents of a busy new family ride the children for treatment and decorate the party place for two pekka.

The afternoon of August is flooded with love when Alina Niemi, 32, and Janne Lehto, 37, get each other on the altar of Lestijärvi Church.

It took years to live together to take a big step, and even a common child was brought into the world.

But when the emotions and the most important values ​​of life came into play, the early stages of a beautiful love story had already been struck in the first moments of acquaintance.

Sometimes true love is found from afar, as happened to Vera Richardson, 24, who traveled to meet her friend in the United States.

There, he met Justin Richardson, an American native, 26. Vera and Justin were already somewhat erratic, but the encounter left traces on both and made Vera explore his own feelings - not only because of his love but also because Vera was still in a long-term relationship at the time.

Vera divorced her then partner and returned to the United States.

It was the beginning of a year of long distance and traveling across the Atlantic.

In the end, a solution had to be made.

The couple got married and Justin moved to Finland, where dream weddings are celebrated with the help of a dozen gases.

While a large amount of gas is useful from time to time, the completion of Vera's own dress and the arrival of Justin's suit mean that the very last moments are left.

The small wedding party of 47-year-old Katja Karhunen and 42-year-old Tero Pääkkönen in the mountain landscapes of Ylläs symbolizes their separation from the past.

Both have failed Marriages behind them, and finding new love has completely changed the direction of their lives.

Shortly before Tero met, Katja suffered from severe depression and burnout, which forced her to stay on a long sick leave from her work as a deacon.

Lightning love for Tero helped him get to his feet, and nowadays Katja looks at the world brighter.

The wedding party is especially relevant to Katja, and as a church employee she has wanted to formulate the whole formula herself, right down to the priest's speech.

Of particular excitement to the couple is the priest’s attitude toward metal music as part of the church ceremony.