Central residents want permits to hunt white-fronted geese: "Geese must now be given a big ball to the side"

Coalition MP Vestman, for his part, has asked a written question about protecting geese from hunting and bird flu. 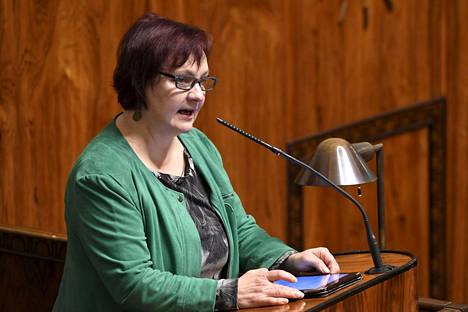 White-fronted geese are once again starting to accelerate citizens and politicians.

Four MPs from the city center are demanding an account of their activities and permits for hunting white-fronted geese from the Ely Center of Southwest Finland.

According to centrists, the Ely Center has not yet issued any permits, although the spring migration of white-fronted geese is about to begin.

- Hunting has been found to be the only way to expel white-fronted geese from farms, but now permits are hanging in Ely.

It seems that time is being played here and we suspect that someone may also have political motives to delay this matter.

With these permits, there is now a hurry like a May bus for morning milking, the central members of the Agriculture Committee said in a statement.

The release was signed by the committee's chairman Anne Kalmari and members Mikko Kärnä, Mikko Savola and Juha Pylväs.

The Parliamentary Committee on Agriculture and Forestry, chaired by Anne Kalmar, will begin discussing a citizens' initiative on Friday to allow the hunting of white-fronted geese. Photo: Heikki Saukkomaa

Last autumn, Minister of Agriculture Jari Leppä (Central) and Minister of the Environment Krista Mikkonen (Green) set up a goose fist to solve the problem caused to farmers by the spring and autumn migration of whitefish.

The acquisition fist promised both more permits for goose hunting and dining fields on their migratory trips to rest for hundreds of thousands of geese stopping.

The white-fronted goose is protected by the Nature Conservation Act, its hunting is prohibited in Finland, and exemptions for goose hunting are granted by the Ely Center of Southwest Finland.

- The Ely Center of Southwest Finland should not be any sister organization of Birdlife, but a licensing authority that grants exemptions for goose hunting.

Derogations are the only way to work long enough to get the white-fronted goose on the list of species to be hunted in the EU.

That, too, must happen quickly, because if the population grows as it has grown so far, the current population of 1.6 million individuals will multiply to 2.5 million by 2026.

- Hanh must now be given a big ball to the side and at the same time it must be ensured that the results of the hunt end up with the roots of the pot, and not to be burned or buried, the people of the center said.

An exception granted by the Ely Center of Southwest Finland is required for hunting white-fronted geese.

The white-fronted goose is protected by the Nature Conservation Act and must therefore not be eaten. Photo: Jussi Nukari

Geese are not allowed to eat because it is not a game species and the white-fronted goose is covered by the Nature Conservation Act.

The Coalition Party MP Heikki Vestman, for his part, has asked a written question about protection against bird flu and the hunting of white-fronted geese.

336 cases of avian influenza have been found in white-fronted geese in Central Europe. Photo: Heikki Saukkomaa

Vestmania is concerned about the arrival of bird flu in Finland in connection with the spring migration of white-fronted geese.

According to Vestman, avian influenza has already been detected in 336 white-fronted geese in Central Europe, and spring migration of geese takes place through Finland.

The parks and rural fields of the metropolitan area will soon be full of flying infestation bombs.

In addition to the already massive crop damage and recreational damage, the white-fronted goose will soon pose a serious health threat.

How does the government plan to prevent the spread of bird flu through spring migration of birds, Vestman asks in his written question.

According to Vestman, the Ely Center of Southwest Finland granted 10,705 shooting permits for the autumn migration of geese, but only 564 of them were utilized.

On Friday, the Committee on Agriculture and Forestry will begin work on a citizens' initiative to allow white-fronted geese to be hunted.