Did Queen Elizabeth refer to Harry and Meghan in her speech? The monarch's speech was made just before the fierce interview of the duke couple 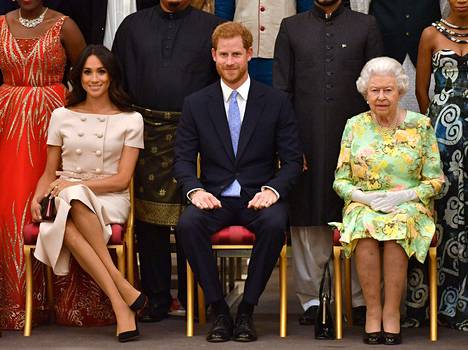 A TV interview of Prince Harry and Duchess Meghan to Oprah Winfrey was shown in the United States on Sunday night at local time.

The duke couple of Sussex did not paint a very flattering picture of their life in the court in the interview.

Meghan said she had suicidal thoughts and she felt that she did not get the help and support she needed from the court.

The interview also highlighted the couple’s Archie boy and how the child’s skin color sparked discussion in the court.

Hovi has not commented on the couple's allegations.

The interview with the Duchess of Sussex was shown on TV just a couple of hours after Queen Elizabeth’s Commonwealth Day speech.

Commonwealth Day is exceptionally celebrated at home this year due to the coronavirus pandemic.

The Queen's speech had already aroused much interest in the international media in advance because of its timing.

The Duke of Sussex has not visited Britain since they left the court in the spring of 2020. Photo: John Stillwell

In her pre-recorded speech, the Queen highlighted how the coronavirus epidemic has plagued families around the world.

In his speech, he also described how technology has helped people stay in touch with each other.

"Restrictions, quarantine and teleworking have been a special experience for many citizens of Commonwealth countries," said Queen Elizabeth.

- Technology has made it possible for us to keep in touch with our friends, families, colleagues and people we have not been able to meet face to face.

In her speech, Queen Elisabeth emphasized community spirit and thanked the medical staff for fighting the coronavirus epidemic.

In her speech, Queen Elizabeth emphasized cohesion, family and friendship, the importance of which has been further emphasized in difficult times.

In his speech, he praised in particular the medical staff and their contribution to the fight against the coronavirus epidemic.

“There have been inspiring examples of courage, commitment and selfless dedication to service in the Commonwealth, especially in the health sector and public services,” the Queen praised.

In her speech, Queen Elizabeth did not refer directly to Harry and Meghan, who moved to the United States last year.

In Britain, however, the Queen’s talk of how technology has helped people stay in touch has been seen as a subtle reference to the Duke of Sussex who left the court.

Prince Harry has previously said in public that he is in regular contact with his grandmother through video calls.

Harry also stated in an interview with Oprah Winfrey that she has spoken to her grandmother since her departure more than ever before.

- We have a good relationship and we understand each other, Harry said.

According to Harry, he told his grandmother, Queen Elizabeth, about her departure from the court in advance.

In an interview with Oprah Winfrey, the prince said she was close to her grandmother. Photo: HENRY NICHOLLS

In the same breath, the prince confirmed rumors of a break between him and Big Brother William.

- I feel betrayed because he has been through similar things, so he knows how the pain feels.

And he's Archie's grandfather, Harry said of his father.