Ilta-Sanomat asked both the restaurateur and the regional government agency for their views on the party organized by the Helsinki restaurant in the worsening coronary situation. 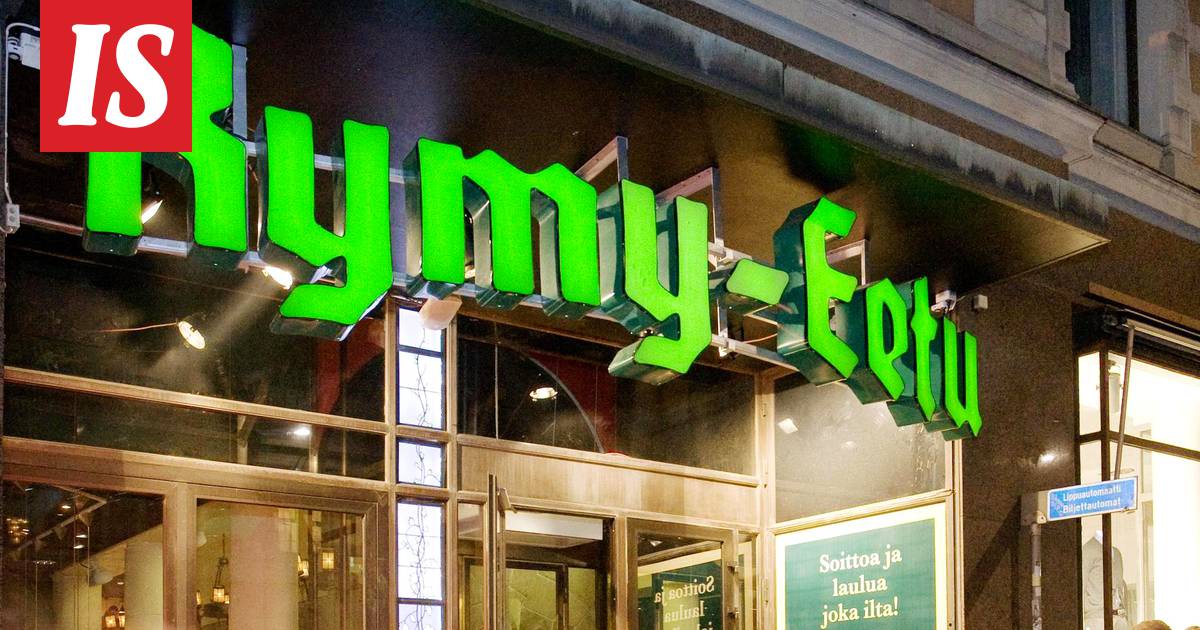 Helsinki-based bar Rymy-Eetu advertises on its website that it will hold an “apocalypse party” on Saturday.

The website of the restaurant states that there is a dishwasher in the bar on Saturday night, and there is also a shot rally in the program.

- Last night before the lockdown.

The corona situation in Finland has deteriorated recently.

For example, the mayor of Helsinki, Jan Vapaavuori, described the coronary situation in the capital as serious on Friday and quite likely to worsen.

Almost 200 infections a day are now diagnosed in Helsinki.

Infections due to viral variants have come from restaurants, private events and adult hobbies, among others.

Ilta-Sanomat asked the Southern Finland Regional State Administrative Agency how it sees the festivities in the light of the regulations in force, and how Avi reacts to this type of activity.

Chief Inspector Jarmo Castrén from the Regional Administration of Southern Finland says that he has been in contact with the restaurant in question.

- The restaurant has a DJ and a happy hour, as it aims to attract people to the place.

I've called the restaurant and told the representative that there is now correctly not right to advertise that way.

We talked together and they thought there wouldn’t be very many gangs going in there.

But that's not what we can know.

Castrén says that, based on current information, Avi is not banning Saturday’s restaurant parties in advance.

However, Avi plans to monitor the restaurant’s operations and intervene if necessary.

- It will probably be visited and inspected on Saturday.

That is, we are going to see if the interest rate regulations are followed.

At that point, we get more information about whether it’s an audience event.

If there are problems, a written notice can be given, or the police or Avi can even suspend the operation.

By decision of Avi of Southern Finland, for example, the area's gyms and other facilities open to the public may not currently have more than 10 people at a time.

However, this does not apply to restaurants that have their own instructions.

according to a government decree that has entered into force, half of the customer seats may be used in restaurants.

Normal restaurant opening hours until 11pm are allowed, as long as the corona instructions are followed there, i.e. safety intervals and that people have to be directed to the table and tell the routes to the toilets and out and so on.

On 18 February, the Regional State Administrative Agency of Southern Finland issued a decision that public events for more than six people in its territory are prohibited.

According to Castrén, the problem is that the authority cannot prohibit a party organized by a restaurant in advance unless it can determine with certainty that it is precisely the public event and not the normal operation of the restaurant.

Thus, parties or other evenings organized by a restaurant can be prohibited in advance only if Avi is able to interpret the activity as a public event.

- If the criteria for a public event were exceeded here, ie we knew for sure that tickets would be sold for this and that there were elements that would show that it was a public event, then we could deny it in advance.

Here is the problem of interpretation of what an audience event is and where that boundary goes.

When it is not defined anywhere.

- Even if there is a DJ, it does not just mean that it is a public event, if the DJ is part of the restaurant's activities anyway.

At that stage, it is considered to be a public event at the latest if tickets are sold there and if the event is advertised.

Castrén emphasizes that Avi’s strong and emphatic message to both restaurant entrepreneurs and others is that even small gatherings should not be held at this time unless absolutely necessary.

- The disease situation is so bad that you should avoid all these types of events that bring a lot of people together.

Ilta-Sanomat asked Tarja Palomäki, CEO of Happy Hour Restaurants Oy, how she would comment on the festivities advertised by Rymy-Eetu on Saturdays.

According to Palomäki, “apocalypse party” does not mean a ruthless party.

In the light of the current corona situation and the recommendations and regulations, how would you comment that it has been decided to hold such a party in this situation?

- This is our last night when we're open.

These faucet products, which go to waste.

The name Apocalypse Party, perhaps a little misleadingly, came from the fact that this feels like apocalypse to us when all restaurants are closed.

You will advertise this event in advance on your website, and the restaurant will have a dj on site, as well as a shot rally and other event.

From your point of view, isn’t this to be interpreted as a public event?

- It's not an audience event, we've had this every weekend.

It’s interpreted to mean that if you have a megastar, for example, then it’s an audience event.

But if that’s just the normal operation of a restaurant, then no.

- Normally we have live music, but now we don't have it anymore.

From an ethical point of view, how do you see this opportunity being held in this current corona situation, which has rapidly deteriorated?

- This is not against any recommendations.

That the staff instructs the people at the table, everyone sitting in their own seats.

There is no dancing, no singing, no live music, sold out of stock.

In addition, we have invested in breathing air purifiers that kill viruses from indoor air, and the contact surfaces have been nano-treated.

You advertise this on the restaurant's website that "stocks empty, happy hour and shot rally."

It strongly becomes such an image that there is an explicit aim to haul people to the scene.

- Well, we hope to get even some sales.

That is why there is business.

- This is the last night, which means we have draft beer, for example, which is ruined here when the restaurants close.

They are sold out and such.