Johanna Matintalo clicked on the preliminary estimates for the World Championships, star anchor Pärmäkoski from Ropo - “That's what it seems to be”

The women’s message bronze was a great surprise, which even received decisive help from the western neighbor’s service booth. 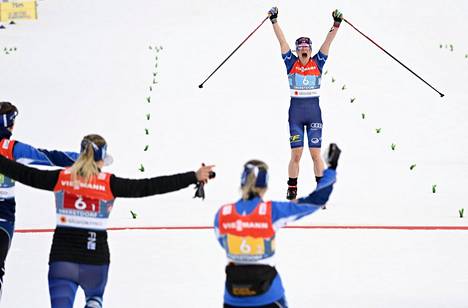 On Thursday, there was a much more pleasant reason for tears.

The messenger of the second leg, known for his willpower, also wanted to give back a bit about the preliminary estimates of the success of the Finnish World Cup:

- All success was bet only on men.

After all, we women were not given any opportunities in advance, Matintalo clicked.

- It was decided that if we do not believe in our own possibilities, then who will do it for us.

The gift horse jumped on the track just on the Matintalo section.

Swedish opener Jonna Sundling was still able to dodge the bullet despite her slipped skis, but Charlotte Kalla, who went off-road after her, did not.

An overwhelming pre-favorite was in the yard.

The starting points of the competition were well described by the reactions of the women, when Pärmäkoski, who folded the anchor section with superior skis, washed Jessie Diggins, a cannon at the beginning of the season.

The roar of human joy was far away.

- In fact, I yelled louder once the World Cup, Pärmäkoski said.

The women's national team coach Ville Oksanen admitted that although the message medal was still a bit dreamed of at the beginning of the season, the goal had to be revised after Kerttu Niskanen was injured and Pärmäkoski drifted undercut.

- the free side of the track is the raw, that there was simply be stamina sports athletes.

Tactically, this went well for us, Oksanen said.

Matintalo was very surprised to hear that in his first value race he was skiing for the first time in his entire career, a second leg that obviously belonged to Niskanen in the original plan.

The second debutant, Jasmi Joensuu, was put in as an opener, partly because this, with a sprint background, can withstand the rumble of the first hundred meters of the message opening well and recovers quickly from the terrain.

- I had never been as excited as before, the performance of one plus compared to the starting points, Joensuu estimates.

Riitta-Liisa Roponen's finding the best performance for years in difficult conditions that suited her well came to the coaches in the middle of the competition as a news and a gift from heaven.

The torsional diesel of the oldest World Ski Championship medalist of all time in the Nordic skis led the Finnish medal battle.

Roponen literally hyperventilated in the finish area when Pärmäkoski and Diggins took on the dimmest medal.

He could not, without the help of Yle's camera point, separate from the front sector, whichever led.

- That's what it seems to be, Pärmäkoski acknowledged from the side and caused a laugh.

- Riitta-Liisa, 42, is very proud of herself today, Roponen, who has now won a message medal in Oberstdorf after a 16-year break, said.