A man already known to the police injured eight people. Police are investigating the act as a terrorist attack. 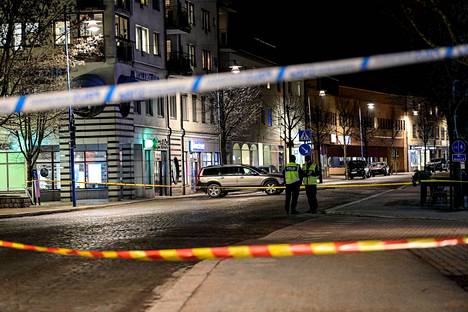 The life of the small town of Vetlanda, with more than 27,500 inhabitants, was shaken on Wednesday when a 20-year-old man raged with a blade in the city center.

Police shot the man in custody.

Police are investigating the act as a terrorist attack.

Linn Bergdalen, who hit the scene just a moment after the attack, told Vetlanda-Posten that he realized quite quickly that something very dramatic and insane had happened.

I didn’t realize it was so dangerous.

If I had figured it out, I wouldn’t have stopped the car.

Bergdalen said he had seen the blue flashes of police and ambulance flicker from afar as he was driving towards the market square.

- I first thought that maybe an elderly person had had a heart attack, Bergdalen tells the magazine.

When Bergdalen came to the market, he saw more and more flashing lights and police began to isolate the area.

He says he wondered what had happened.

It was only a moment later that he received a message from a friend that there had been a shooting incident in the city center.

It felt so strange that this kind of thing happens in little Vetlanda.

I didn’t realize it was so dangerous.

If I had figured it out, I wouldn’t have stopped the car, Bergdalen says.

16-year-old Aliette Hellberg was at the gym next to the venue at the time of the event.

He told Vetlanda-Posten that the events also attracted the attention of fitness enthusiasts.

The crowd began to gather around the windows and watch what was happening down at Bangårdsgatan.

Hellberg said the atmosphere was worried and even scary.

- One could not have believed at all that this would happen here, Hellberg told Vetlanda-Posten.

- I condemn this terrible act.

We face these horrible events with the collective power of society, Löfven said in a written statement.

- This was again a reminder of how fragile our sense of security is.

I ask everyone to think about those who have been victims of violence and those who work in medical care, the police and the municipality to treat the injured and restore safety, Löfven appealed.