The life story of national team leader Glenn Lindholm is certainly not the most typical of a ski coach. It was time-consuming to tell him at all. 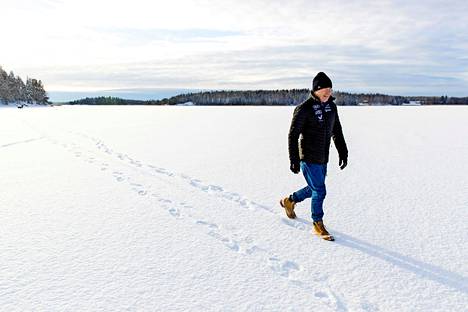 According to established practice, Urheiluleht articles are dated to the municipality where they were made.

Loviisa should be read after the author's name, although ski coach Glenn Lindholm, 49, is interviewed at his home in Pernaja's maritime idyll, which was connected to the city of Loviisa in 2010.

Lindholm refuses to do so:

- I am a complete identity pernaja kind of, I do not in any way Loviisa.

This story is dated to Pernaja, the man who represented Toria in Loviisa, who had started his entire sports career at the age of 6, says with a twinkle in his eye.

There is a real cover for speeches about identity, as Lindholm is based on a fishing farm on the island of Tjuvö in Pernaja, where the family has made a living from the seas of Eastern Uusimaa for many generations.

Glenn Lindholm estimates that he was at sea with his father, mainly fishing for herring, for a total of up to a thousand nights.

Dad is already in his eighties.

The article was originally published in Urheilulehti 7/2021.

You will find similar long and high quality stuff in the publication every week.

Although Pernaja also has a postcard-like winter day on the day of the interview, the coastal winters in southern Finland today are mainly very different.

The country could have been black for a long time already in Lindholm's childhood and youth.

One must therefore ask how, miraculously, these starting points can become a person who first makes a significant career as a national top level cross-country skier and then as a respected ski coach.

And that's not all.

Spouse Johanna Lindholm (nee Ahlstrand), 47, grew up in Loviisa at the same latitude to even a World Championship level skier and the couple's firstborn Remi Lindholm recently debuted at the World Cup in Lahti.

Tripla is unique in the history of Finnish skiing.

To top it all off, Kent, one of the younger boys in the family, skied at the Hollola Junior Championships a stone’s throw from Salpausselä at the same time as Father Glenn focused on his bread work, watching the women’s World Cup combined race.

- Yes, there hasn't always been a decent winter here.

At times like these, an attempt was made to rub a small piece of the trail, or else we ran.

My father took me to Loviisa to ski from an early age.

The track called Skyttis still has a height difference of about 40 meters.

A couple in love at Vöyri Sports High School in Swedish-speaking Ostrobothnia has been just as well for more than 30 years.

Lindholm looks with his hand out the window of his house built at the turn of the millennium.

Between the trees is a very important and dear sight for him: the sea.

- I've been training a lot of extreme skiing on the frozen sea, and I do not really do any baanalla currently driving.

It partly explains that free technology was stronger.

Skiing on sea ice is nice, but it's a little different if you're trying to develop as a cross-country skier.

The love of the sea and herring fishing also crumbled Lindholm's dreams of an academic degree in physical education in the early 1990s.

The almost Swedish-speaking skier boy went to the University of Jyväskylä with enthusiasm to read as a physical education teacher.

I missed the sea quite an astonishing amount.

Lindholm returned from Jyväskylä to Tjuvö and helped his Harry father at sea with a few years of training.

The lifestyle was harsh.

During the meltwater, herring was caught in the trap, and pike and mackerel were caught under the ice cover.

So-called valuable fish such as salmon and whitefish were scarce in the waters of Pernaja at that time.

The catch was driven by a fiskar to the port of Isnäs, from where its journey continued.

The work, especially in the clutter, was extremely physically heavy and dangerous.

- Dad said he had just gone through the ice a hundred times.

His fishing only ended in a cerebral hemorrhage, which he fortunately survived.

I found him at the bottom of the boat.

Catching herring is a raw job where you have to trust a friend. Photo: Glenn Lindholm's home album

Professional fishing in ascetic conditions is a team game.

The other must be trusted, and oneself must not be placed on a stand.

Lindholm, who has worked with top athletes for a long time, has also seen a very different kind of behavior.

- Even the level of demand of a big winner and a certain professional selfishness do not mean that normal behavior and consideration of others would not be valid.

For example, my son Kent is an avid junior skier, and Niskanen’s Iivo often asks him with messages how he is doing.

Gives a little hint and encouragement.

Everyone realizes how much that means to a boy.

The passion for seafood runs through the genes of a close family: of the boys, Kent and Isac spend virtually all of their time in the summer as fishermen on nearby beaches.

Glenn Lindholm doesn’t think his offspring will end up in professional fishing.

The increase in bureaucracy has hampered the tough traditional profession in many ways.

The last season of his own racing career was 1997, although it was supposed to be the beginning of a new one.

The 26-year-old had moved to Rovaniemi to study for good training conditions.

A coaching place was also organized at a local polytechnic.

The spouse began to expect a pair of firstborns, but soon a black swan appeared over the family idyll.

- My field of vision had been behaving strangely for a long time, and I felt quite a bit of pressure inside my head.

I wanted to believe that a visit to an optician or ophthalmologist would help, but then it didn’t quite go that way.

At the same time as her firstborn son Remi was born in Oulu on January 17, 1998, his father was sleeping in the neurosurgical intensive care unit.

The diagnosis of symptoms was a second-level brain tumor that had undergone rapid surgery to save lives.

- Before the operation, the doctors said that it was all about the hours.

I was in acute danger to life.

I talked to Johanna many times after the first mission about how she would proceed with the boy if I was no more.

Glenn Lindholm was a long-distance specialist in his own skiing career. Photo: Matti Björkman / Lehtikuva

However, there was enough faith in life: in the middle of six treatments that required surgery, a son of Kevin was born, in February 1999.

- Pernaja was a small municipality, and I later saw its financial figures for 1998 and -99.

They clearly showed a spending spike caused by my massive treatments.

I even felt a bad conscience about it, as weird as it sounds, Lindholm says with a smile.

He especially remembers one episode from the beginning of his treatment periods when he was lying in a hospital in Töölö, Helsinki.

The Nagano Winter Olympics were going on February 9th.

Mika Myllylä, who always enjoyed Swedish-speaking skiers and knew the language, was a good friend of Lindholm.

- At the same time, an acquaintance of mine who was in the hospital came to wake me up at night and said that we would go see when gold came to Finland.

I pulled some slides into my ass and somehow got myself dragged into the TV room.

The effort paid off;

Prior to his illness, Lindholm's strict goal had been to provide evidence for the 50-kilometer (v) race of the same Olympics.

I pulled some slides into my ass and somehow got myself dragged into the TV room.

In the end, Finland was represented on the kingship trip, for many different reasons, only by Juha Alm - for whom Lindholm never lost a 50-kilometer race.

However, the racing career had been patted for him.

The Finnish-Swedish ski family has traditionally been strong and close.

Somewhat surprisingly, Lindholm reveals that even in his youth some kind of language racism was floating in the air.

- Some of the Finns seem to think that every Finnish-Swedish skier was born with a spoon of gold in his mouth, laughs Lindholm, whose mouth was not mocked by such a closet in the herring gulf of November in the icy Gulf of Finland.

When there has been snow in Pernaja this winter, the movement is smooth. Photo: Antti Hämäläinen / IS

The Finnish-Swede, who had a varied career, had long been involved in various speculations when the faces of the coaching team of the A-national team changed.

The Ski Association first asked about his interest as early as 2010, but the obligations of the father of the extended family did not allow him to answer in the affirmative even then.

- The general way of thinking is that if you have been coaching skiers and investing in this for so long, then coaching the national team would be like an obsession.

Some Finns probably think that every Finnish-Swedish skier was born with a spoon of gold in his mouth.

Although the cross-country team is the most watched in the country and is perceived as a very important nationally representative team, this is not fully reflected in the resourcing of coaching.

The majority of national team coaches typically have two, even three, different employers whose income streams scrap their livelihoods.

In the toughest rival countries, such a fuss would not even be heard.

- The situation is not ideal.

When you just don’t have time to do everything you should, a feeling of inadequacy strikes.

I've told my view also Ski Association, working in the coaching manager at the Vuokatti Sports Institute in addition to the national team Lindholm says.

He also worked for some time in coaching the best skiers who camped in Vuokatti, China, even met with the Chinese Minister of Sports, and got to see the contributions of the superpowers.

- About 50 weeks of joint camping.

Since Lindholm's area of ​​responsibility is primarily the women's A national team, her goals for the next few years are clear.

The team’s severely overdue generation change should be brought to the finish line.

But Lindholm, who calls his daughter Mette the “toughest dude” in his family, wants more:

In Switzerland, Guri Hetland (ex-coach of Dario Cologna) has been an award-winning coach, but Pirjo Muranen saw it as a career option, although he chose otherwise.

No women have been included, even if there is a need and a demand.

Is it because, however, they do not believe they will be elected, even if they are qualified and educated?

Or that they don’t think they’ll gain trust from the community?

Whatever it is, those glass ceilings need to be crushed.