Finland opened its medal account at the Oberstdorf World Championships. The IS jury will evaluate the hot topics of the day in the World Cup judgment. 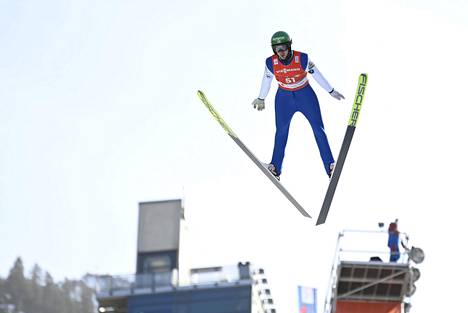 Ilkka Herola Day was celebrated on Friday at the World Championships in Oberstdorf.

The predator of Savo returned Finland to the combined medal stand for the first time since 2007.

The jury of Ilta-Sanomat packages the products of the hectic day in its personal way.

The jury includes Pekka Holopainen, who reports from Oberstdorf on the spot, and the two journalists from Finland who follow the race: Mikko Knuuttila and Tatu Myllykoski.

Star: I don't think there are two words about this!

Ilkka Herola restored the combined medal of honor after a 14-year break.

For so long, the medal catch of Nordic species depended entirely on cross-country skiing.

Story: Equally self-evident is Petter Kukkonen, whose unfortunate, unrestrained species association Finnjumping, who was united at the time, got his stone sled to rail in 2012.

At the end, thank you stands.

Moka: If this can now be counted as a mocha, then Herola's descent head in the morning was not quite worthy of a boarder, when after the hill section he estimated his medal seam at 10 percent.

The starting points were much better.

Ilkka Herola did better on the hill than he thought. Photo: Emmi Korhonen / Lehtikuva

Of course, it is easy for the winner to be humble, but Finland has longed for its old level in a small sport.

Surprise: Germany holds three places in the top five in the World Cup, but was surprisingly left without a medal, although Herola considered Eric Frenzel and Fabian Riessle to be the toughest gold medal favorites after the hill.

At the same time, he gave hope to the active hill jumping, alpine skiing and biathlon of the ski sports now on the bottom of the wave.

The species can rise even from a deep recession, as long as a small number of burning souls are found.

His sports novel The Olive Trees Never Die, which he placed in ancient Greece, was a brick-sized stump.

An even bigger story was the rise of the united Finland back to the top of the world, for which Kukkonen has been working since 2012.

Moka: The head coach of the Estonian ski country team Jaanus Teppan shook the quote of the day, wondering about the fuss of Seefeld's anti-heroes Andreas Veerpalu and Karel Tammjärvi for IS.

- How can a doping program be designed so badly that it does not make it just 40th higher, Teppan said.

Style: The Finnish women's hill jumping team had time to follow Ilkka Herola's silver skiing before the start of her own race.

The ski jumpers took note of “Beauty” Herola’s achievement by wearing face masks that had “Good Beauty” written on them.

Unfortunately, the women’s own race was left in one round and ninth place.

Ex-hillstar Ahonen punched Pärmäkoski in a ski suit of shorts, for which the trails roasted by the spring sun in Oberstdorf will probably still be used.

Star: In the afternoon of Oberstdorf, the silver hero Herola dug himself into Finnish ski mythology.

The ten-kilometer section of skiing was one final lap from start to finish.

Then the actual final letter came off, though it must have been Herola's weakness.

The jump was lost and the man on the ground.

The trend reversed in December at Puijo's harsh hill camp, where a routine was found.

Returning to the basics was worth it.

The Finnish melting down the trail with a flame pattern melted less than everything.

If the jump was once a mocha, what happens when Herola joins her best?

Style: The men’s combined race media event was a thrill to watch.

Juho Mikkonen, who operates with a solid military background, stood out from the crowd with his jerky hedgehog.

Tommi Nikunen tried after all.

Ilkka Herola congratulated Jarl Magnus Riiber from Norway, who decided in the final round of the race. Photo: Odd Andersen / Lehtikuva / AFP