The ski holidays began: This is what happened to the number of corona tests performed in Levi

The municipality of Kittilä has had to pay rental cars to quarantined holidaymakers, for example, so that they can travel home without exposing others. 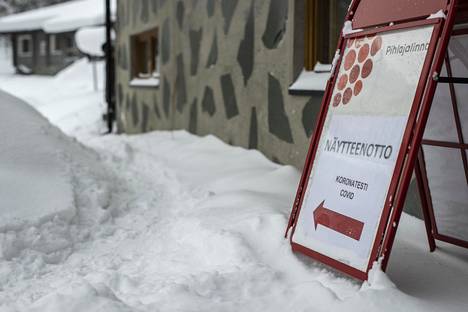 As ski holidaymakers in southern Finland pack in Lapland, the number of corona tests in the area multiplies in many places.

In Kittilä's Levi, the municipality cooperates with Levi's private medical stations, so a tourist who wants a corona test usually has to apply to a private party, for example in Pihlajalinna, for a corona test.

The Kittilä municipality's website states that if a person has insurance that replaces the corona test without deductible, the insurance is used primarily, but otherwise the costs come from a private operator to the municipality.

Tanja Hänninen, service manager at Pihlajalinna in Levi, says that with the start of winter holidays for schoolchildren in the south, the number of corona tests in Levi has tripled.

Now about 30 tests are performed in Pihlajalinna every day.

Hänninen says that even small symptoms have been applied for tests at Levi in ​​accordance with the instructions.

Recently, there have been cases, among other things, where a southern schoolboy has received an exposure notification from the school only after reaching Lapland, and has therefore applied for a test in Levi.

The good news is, however, that not many infections have been found - so far.

- In practice, the situation is good in relation to the amount of testing.

Let's talk about a few positive results this week, which will be confirmed by a PCR test, Hänninen says.

In Lapland, mainly municipalities and private individuals use the corona quick test, the result of which is completed in as little as 15 minutes.

A positive result can then be further confirmed by a PCR test.

- When people are here now, so often the number of infections will not be visible until a week later.

Hopefully everyone is healthy on the move, but when it comes to this kind of disease, you don’t always know if you’ve been exposed or the information about the exposure only comes when you’ve already made it to the north.

- All the positives are too many, but at least the situation has still seemed relatively good, Hänninen sums up.

The result of Korona's quick test can be found in the quarter. Photo: Pete Aarre-Ahtio / IS

If, for example, a tourist arriving in Levi from Helsinki is diagnosed with a coronary infection in Levi, Levi must remain in quarantine.

The municipality is responsible for the costs of the tourist's quarantine period, such as food and accommodation, but according to Heidi Tanninen, the leading doctor of the Kittilä Health Center, in practice the tourists have mainly borne their own quarantine costs.

- For the most part, people organize their own affairs and agree, for example, that the rental of the cottage will continue.

- And I hope that at a time like this, when we go on holiday, people would be responsible for it and organize their own affairs.

After all, it’s a tough job for us if we need to arrange quarantine accommodations and meals for everyone who is corona positive.

However, there have been a few exceptions.

The municipality of Kittilä has had to pay for rental cars, for example, with which people have been able to return safely to their hometown.

If the municipality has to pay for quarantined accommodation, Tanninen states that the aim is to find an affordable alternative for the purpose.

But we haven’t really had any such cases yet.

Kittilä is particularly concerned about the coronavirus and variants of the virus that Levi's holidaymakers may bring. Photo: Pete Aarre-Ahtio / IS

Tanninen says that during the last week he has no known bar exposures in the Kittilä area.

He says the hope remains that holidaymakers in the South would prefer to spend their free time outdoors, keep their distance from others and follow the mask recommendation.

- If there are even small symptoms, do not move anywhere in the air, but apply for a test and stay in your own accommodation.

That is the most important thing.

Ilta-Sanomat followed the corona safety guidelines when making this article.

Both the photographer and the reporter wore masks and kept their distance from other people.