Nokia anticipates weak earnings growth this year, but the Reddit forum will raise the company's price like a rocket. But is the exchange rate collapse already visible? 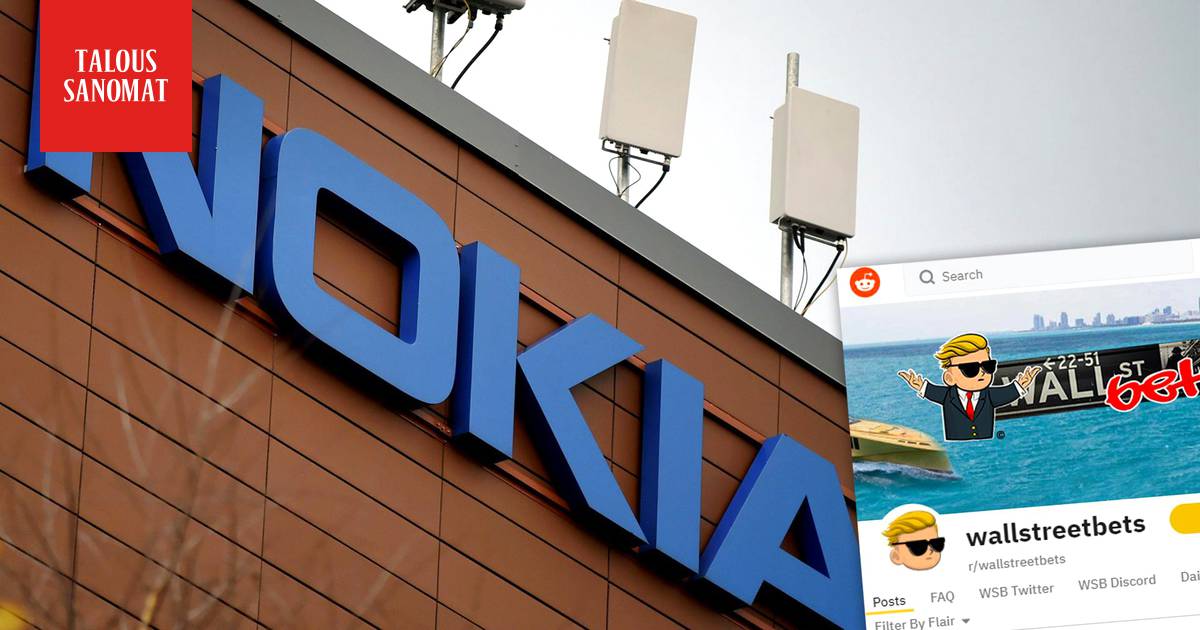 Next to Nokia’s name is a long line of rocket mothers on the Reddit site’s wallstreetbets center in written posts.

The title of one message is "Let's take nok to the moon".

It is the glow of the wallstreetbets channel discussions that is said to be the reason for the continued rise in Nokia’s stock price on the second day.

Nokia's share price rose 13 percent on the Helsinki Stock Exchange yesterday, which is the company's largest intraday rise in many years.

In New York, the stock rose even more strongly without any actual new information coming to light about the company.

Today, Nokia's share price has risen by just over 8 percent at its best.

- All you can do here is follow the page and wonder about the phenomena of this market situation, thinks Nokia analyst Mikael Rautanen from Inderes analysis company.

According to Tuukka Kemppainen, Danske Bank's senior strategist, analysts are now "more in the viewer's presence".

On the other hand, Nokia's recent price movements are also not completely unprecedented.

- When Nokia was still a big company on a global scale twenty years ago, such speculation before the earnings dates was more the rule than the exception.

Now the company has a new management, it will report on the result next week and organize a capital market day within a couple of months, Kemppainen says.

Now it’s been two days to get up, but the unbridled hype from Nokia is still lacking.

Nokia's price increase is still modest compared to, for example, Tesla, Gamestop and Nokia's former competitor Blackberry, which have previously been annealed on the Wallstreetbets forum.

Tesla’s value has risen about 800 percent over the past year, while GameStop’s share price had risen more than 245 percent a year by last Friday, and Blackberry’s share price has doubled this year.

- If Nokia is compared to Tesla, then anyone can still justify Nokia's current value with traditional valuation measures, while Tesla is not, Kemppainen points out.

Online discussions have created faith in Nokia's position in the 5g market, although the company's technical development is estimated to lag behind its main competitors.

At least Rautanen of Inderes does not anticipate immediate success for the company.

- Nokia is at an early stage in a big turnaround, where the company itself estimates that it will have a three-year project, Rautanen says.

- The right things are being done, and the conditions for a successful turn are in place.

In the short term, it means weaker earnings performance when you have to put the basics in order and invest in technology leadership.

The guidance given for this year does not promise a very good year for Nokia.

But how long can Nokia's share price continue to rise?

At least the rise of Tesla, GameStop and Blackberry has not yet stopped.

Kemppainen points out that there is now an exceptional amount of money in circulation.

Last spring in the United States, many sports series were suspended due to the corona, which reduced betting.

At the same time, central banks and governments began to revive the economy with huge sums.

- When people do not have normal ways to use money, it may be that it is left to invest, Kemppainen says.

And when many traditional growth companies have risen in price, investors set out in search of cheaper stocks.

According to Rautanen, the attention given to price increases may be one of the reasons that feeds them.

- The kind of irony in these phenomena is that they are self-repeating and intensifying, he estimates.

- We are wondering about this here, it will become a newspaper article, it will be discussed in different channels and it will receive wide attention, which in turn will attract enthusiasts about sudden enrichment.

He assumes that the investors in the wallstreetbets channel are not long-term, but that the money they receive from them may one day also leave quickly.

According to Greg Taylor, Chief Investment Officer at Purpose Investments, the forum has blurred the line between gambling and investing.

is a forum on the impact of investment.

- When separating the company's basic information from the share price, it can be continued as long as it is on the right side of the trade.

But when the trend changes, you have to get out of it quickly, he tells Bloomberg news agency.