The ban on flights from Britain, Ireland and South Africa imposed by the Finnish Transport and Communications Agency Traficom will end on Monday at noon. 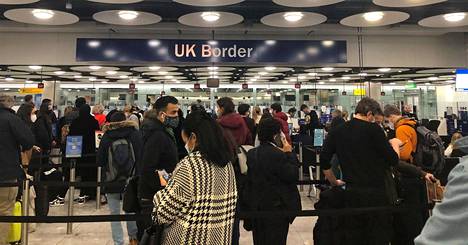 The Finnish Transport and Communications Agency Traficom announced on Friday that it would end passenger flight restrictions from Britain, Ireland and South Africa.

Finnair said on Twitter shortly after the decision that it would resume flights from Britain and Ireland as soon as Monday.

The company has no direct flights from South Africa.

Meanwhile, photographs of London's Heathrow field have spread in the British media.

There are cruel people, no safety clearances and poor ventilation.

Ideal conditions for the spread of the coronavirus, someone might say.

No safety gaps and a clear risk of the virus spreading, Thomas-Symonds said, according to the Guardian.

Travel flights from the UK, Ireland and South Africa were restricted due to highly prevalent and highly contagious coronavirus variants in the countries.

Passenger flights from Britain were suspended by Traficom’s decision just before Christmas, and Ireland and South Africa were added to the no-fly list on 11 January.

On Friday, the National Institute for Health and Welfare estimates that passengers arriving from these three countries are “still a significant risk factor” for the spread of coronavirus variants to Finland.

In its statement, THL considered that it was healthy enough to fly to Finland from London, for example, and that there were no longer grounds for extending the flight ban. Photo: PIA JOSEPHSON / Reuters

However, the THL considered that a ban on passenger flights was no longer necessary if arrangements at airports were adequate.

As a result of the statement, Traficom lifted the flight ban - and Finnair announced that it would return flights from Great Britain and Ireland to its program.

- Here is the recommendation of the health authority.

We rely on the THL statement and act on it, their recommendation has now changed.

The aircraft is a safe environment in the sense that the aircraft has efficient ventilation with operating room-level air filters.

In addition, everyone wears a face mask throughout their stay in the aircraft, and additional contacts and unnecessary movement in the aircraft are avoided, says Päivyt Tallqvist, Finnair's Director of Communications.

Tallqvist points out that, according to THL's instructions, all passengers returning from the UK and Ireland will be directed from the plane directly to the coronavirus test and further to a 14-day quarantine.

Quarantine may be released if the passenger passes two negative coronavirus tests.

The first test must be performed no more than 72 hours before departure and the second at least 72 hours after arrival in Finland.

All passengers returning from Britain, Ireland or South Africa will be routed through a coronavirus test directly to a two-week quarantine.

May be released from quarantine after a second negative coronavirus test. Photo: Seppo Solmela / IS

Tallqvist also reminds that there are still Finns in Britain who were left in the country after the interruption of passenger flights.

- A direct flight is a safer option than returning via a pair change, Tallqvist says.

Tallqvist reminds that Finnair will start requiring all passengers flying to Finland from abroad with a negative coronavirus test certificate up to 3 days old from next Thursday (January 28).

It applies to both Finnish and international air passengers.

- Why not on Thursday?

We give people time to apply for the test.

If you come to Finland on a Finnair flight, we require a certificate from everyone.

We do not require a certificate only for children under the age of 2 who travel with an infant ticket in their parents ’arms, Tallqvist emphasizes.

Flights to Britain and Ireland have been allowed at all times.

From Monday, the planes will no longer have to fly back empty. Photo: Roni Rekomaa / Lehtikuva

When flying from Finland abroad, a certificate is not automatically required.

However, a negative coronavirus test is required in several countries as a condition of admission.

- We have precise instructions from the authorities of all countries on who can be boarded.

Tallqvist points out that air passengers should book even more time from now on.

- Now if you plan to travel, it is good to find out the requirements of the destination country in advance.

New requirements have come to travel documents - for example, that negative coronavirus test certificate - and they all require more time, Tallqvist recalls.