Comment: Bolshunov's trick was the craziest of all time - already losing to Iivo Niskanen led to teasing at the Olympics

Probably the same athlete's behavior from an individual athlete was probably seen in Finland almost nine years ago, writes Pekka Holopainen of Ilta-Sanomat. 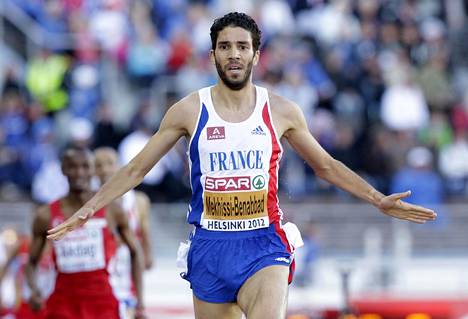 When Joni Mäki flew from Aleksandr Bolshunov's tack along his length to the finish area of ​​Lahti Stadium, he had to think right, because he has last seen on Finnish soil, from an individual sports athlete, such irresponsible and jerky behavior.

We had to go back almost nine years and to the place where the Ski Association plans to hold a massive sprint skiing event next winter: to the Helsinki Olympic Stadium, on June 29, 2012.

The European hurdles champion Mahediene Mekhissi-Benabbad had apparently missed something from the just-finished final.

A Frenchman who had previously fistfully commented on the final results of the running competitions would rudely and aggressively push to congratulate the race mascot - as if forgetting that a young volunteer was sweating inside the mascot costume.

Frenchman Mahiedine Mekhissi-Benabbad expressed his opinion even with his fists.Photo: Tobias Schwarz / Reuters

Hannu Manninen got a tough hand from Finnish athletes in Lillehammer in December 2005, when the German star Ronny Ackermann saw that he was winning in the final.

Ackermann hit Mann with a stick, and it wasn't a touch.

Germany's Ronny Ackermann beat Hannu Mann with a stick in the race in 2005.Photo: Scanpix / Reuters

Bolshunov has already had the impression that losing is not Russian-minded.

Bolshunov, who won silver at the Pyeongchang Olympics in 2018, appeared in the 50-kilometer prize-giving jeans on his leg, without a smile.

Than to underline his view that he lost the competition for the worse.

On Sunday, this “worse”, i.e. Iivo Niskanen, settled on Mäki's defensive wall immediately after Bolshunov's pig, acting as the captain did.

The situation could have easily escalated to the degree of gliding, and the investigation threshold for mild assault has often been exceeded in such episodes.

According to Teemu Pasanen, the head coach of the male skiers, the sanction for Bolshunov should be something more than the rejection of one performance.

The view is easy to thumb.

The internal sanction of his team for Bolshunov is probably not promised, more rod sticks, if we go in the spirit of Russia's established sports culture.

Joni Mäke has been planned to be the anchor of the World Championships in Finland all season thanks to the features seen just on Sunday.

If necessary, a kind Vaasa resident is a rude, cunning and unscrupulous trail player.

These qualities are the value of their weight in gold in the medal battle of the anchor portion of the World Cup message.

At the time, credit anchor Jari Isometsä had exactly the same features, who saw Mäki's final bet in Lahti from the fence as an MTV expert.

Although Isometsä liked what he saw, he assessed with a smile that Mäki's trick in choosing the driving line was so bitter that he could have visited the finish line at a young and hot time to remind his opponent of mortality.

Perttu Hyvärinen and Ristomatti Hakola, who modeled the traditional sections, said that the coaching staff answered the men's prayer in their ski choices.

Neck for a free leg?

Iivo Niska has been welcomed for a long time.

Thanks to his magical second leg, Finland has already been in the middle of the value game in great places, but since then the ride has been cold.

The third part has been a challenging piece in the history of Finnish cross-country skiing, often crumbling medal dreams.

The last time the top cannon was seen in Oslo in 2011 was when Juha Lallukka shook his opponents from his hocks like gloves.

Of course, more was reported about the guy at the end of 2011.

The credit to Hyvärinen and Hakola has grown so hard that Niskanen was most likely also nailed to the World Cup post on Sunday with skates on his feet.

This is what head coach Pasanen strongly understood.

The view is really delicious.

After Saturday’s low-key combination races, the face wash was perfect for both the athletes and the brilliant maintenance team on Sunday: the first podium spots of the season.

Although Joni Mäki is a tough guy, he is not so hard that he would be able to acknowledge Bolshunov in the middle of a message if he had mediocre sticks on his feet.