Columbus first center Pierre-Luc Dubois wants to be out of the team. In the team led by Jarmo Kekäläinen, the situation escalated further early on Friday morning, writes Ville Touru. 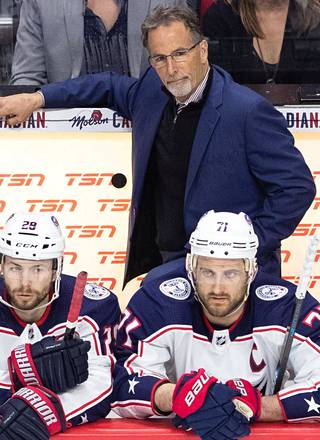 There is not the slightest ambiguity about the hottest topic in the NHL at the moment.

It’s not Patrik Laine’s injury or his desire to move, but Pierre-Luc Dubois of Columbus Blue Jackets.

A 22-year-old Canadian who has signed a two-year extension as a limited free agent on the eve of the season wants to leave Columbus.

Often in similar situations, the public is mainly heard about some indirectly leaked information from insiders about transfer requests or breaches, but now the matter is seldom clear.

Columbus ’fiery head coach John Tortore didn’t spin in vain, but announced last week directly that Dubois wants away, and that this has told the other team about it as well.

The decision to move elsewhere is not in the hands of Dubois himself.

It is decided by Columbus GM Jarmo Kekäläinen.

Dubois has been far from his best in five matches of the season.

It all exudes that he is already mentally out of the team.

Already in the previous match against Detroit, Tortorella sometimes planted Dubois on a bench for an atypical length.

In the match against Tampa Bay, which was played early Friday time in Finnish time, the situation escalated into new spheres.

Dubois didn’t go on the ice again once after the first set, but the sit-up rattled without shaking at the end of the bench for two sets.

It wasn’t an injury, but Tortorella made it unusually clear who is the host in the house.

Tortorella’s tough solution was most likely due to Dubois’s performance, especially in his last substitution towards the end of the opening round.

John Tortorella swears in the name of extreme discipline.

In it, Dubois, for his part, made it clear that he was no longer interested in playing in Columbus.

He surfed phlegmatically in the trough, didn’t even try to win the duel at the attacking head and slid his back straight into the exchange.

You can watch the exchange here.

The reason for Dubois’s desire to leave is unknown, but many suspect it is in Tortore.

This would also be referred to by the coach’s statement last week, in which he said he didn’t know exactly why Dubois wanted to leave.

The leadership style of Tortorella, who is really demanding and authoritarian and, if necessary, gives a face with a storm of feedback, may not be to everyone's taste.

His teams are not allowed any soloing or slipping from work.

In a tortorella team, individuals never rise above the collective.

He really isn’t a coach who handles things with subtle moderation.

For example, in the August playoffs on the Columbus bench, a situation was witnessed where Tortorella and Dubois roared fiercely at each other.

If the duo’s gaps had already become inflamed, the Tampa Bay match was perhaps the final crunch from which there may not be a return.

The teammates squirmed after the match in front of their center and their questions about benching.

- We've had a conversation with Luc.

He will be one of us until otherwise announced, Captain Nick Foligno said.

Tortorella, for his part, announced at the very beginning of the press conference that he did not intend to comment in any way on Dubois' benching, but was reluctant to talk a little about it.

If you play the right way, you get on the field.

I'm just the coach, whose task is to try to win games.

According to Tortorella, there was nothing special about the situation.

- I've coached Dubois in this way for a few years to get him to grow as a player than a professional, so nothing changed.

Dubois himself refused to come to the media after the bullying.

It’s certainly not in the team’s best interest for its best striker to either sit on a bench or be unwilling to put themselves in the pitch in the league.

Columbus has won only one of their five matches of the season.

The course needs to be translated quickly, as this season the battle for the playoffs is unusually brutal within the divisions.

Each match is practically a four-point game.

The gaze now turns to Kekäläinen, whose phone is ringing non-stop at the moment as other GMs inquire about Dubois's price.

Kekäläinen's game movement is expected to be relentless in NHL circles.

For the Finnish boss, the situation is certainly anything but pleasant.

He booked Dubois’s GM career at his highest, third turn at the 2016 booking ceremony - between Patrik Laine and Jesse Puljujärvi - and has built the club’s future on his number one center.

Kekäläinen has made many successful player deals with his club boss, but he certainly wouldn't want to make this deal.

However, the soap in the hands of a Finn is boiling to the point that something has to be done.

This cannot continue if the season is to be saved.

- Dubois must now trade in this situation.

This is going to be ugly, three-time Stanley Cup winner Patrick Sharp shot a Yankee channel in NBCSN’s studio, sending a message in the direction of Kekäläinen.

The 22-year-old bull-like skill center, just on its way to the pinnacle of its career, is a player whose services are all bombardably interested in all NHL teams.

The different thing is how many teams are really willing to shell out the price required for Kekäläinen.

Even after his current contract, the exchange value of Dubois, who remains a limited free agent, is so great that moving a tug-like like him is not very simple.

Return mail should, in principle, become at least a top-notch central striker.

It is clear that a transaction involving Dubois would in any case be a transfer of a giant class.

Kekäläinen cannot get away from him.

The solution in Kekäläinen's hands is the hottest topic in the NHL at the moment.

Everyone in turn is now developing visions of a store where Dubois could move somewhere.

Social media has been filled with fan transfer proposals to get Dubois into his own team.

What does Kekäläinen do Photo: Mika Ranta

Insider reporter Nick Kypreos reported last week that he knew Dubois would primarily like to move to his home corners in Montreal.

However, there is still very little concreteity.

The situation is not new to Kekäläinen.

It wasn’t until the second season that he tried in vain to persuade his team’s superstars Artemi Panarin and Sergei Bobrovsky to stay away.

These had made their decisions, and the head no longer turned.

Based on the events of Friday morning's match, Dubois has also made his decision.

Now the eyes of the NHL world turn to Kekäläinen.