Peugeot 5008, first refurbished: SUV and minivan in one body - room for seven

Experienced a little face wash, the Peugeot 5008 now always has seven seats. Peugeot introduced the 3008 in 2016 and the 5008 years later, twenty cents longer, but the mid-term overhaul of these models sharing the same basic technology was now done at about the same time. It's no wonder, after all, that these models, which are extremely important to the manufacturer, up to the B-pillar, are exactly the same, except for the engine options. The most significant difference 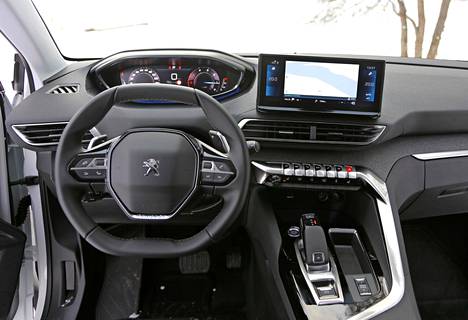 Peugeot introduced the 3008 in 2016 and the 5008 years later, twenty cents longer, but the mid-term overhaul of these models sharing the same basic technology was now done at about the same time.

It's no wonder, after all, that these models, which are extremely important to the manufacturer, up to the B-pillar, are exactly the same, except for the engine options.

The most significant difference is that the 5008 has more rear seat and luggage space thanks to the 16.5 centimeters longer wheelbase.

The altitude makes the 5008 an SUV model, but in terms of space it can also be considered a minivan.

The interior remained more or less unchanged in the slight facelift: the most significant renovations are related to new, higher-quality upholstery options.

In a prominent position, the touch screen in the center of the dashboard is 8-inch at the lowest Active accessory level.

The 10-inch display that comes with the Allure and GT also includes a navigator.

As before, the display can be conveniently accessed with piano switches.

Viewable over a small steering wheel, the 12.3-inch digital instrument cluster has always been upgraded to a matte black permanent display that reproduces dark tones better in bright conditions.

More user-friendly digital instrumentation is looked at over the wheel. Photo: Pekka Virtanen

The automatic emergency braking function, which is included in all trim levels, detects pedestrians and cyclists in the speed range from 5 to 140 km / h.

The equipment package included with the GT, which includes an active Cruise control and a driving assistant to steer the car, is available to Allure for 461 euros.

The night vision system is only available for GT equipment (EUR 1,729).

From the point of view of traffic safety, it is a good thing that the LED taillights also light up in the Attention light position. Photo: Pekka Virtanen

Seats that can be conveniently raised on the basis of the luggage compartment have become standard equipment.

If there is no use for extra benches, they are easy to remove and leave in the corner of the stable.

The rear door opening is a bit low, but all three center row single seats are good for traveling.

There is so much length of space in the middle row that it can afford to hand over cents to the back seats as well.

Fifteen centimeters of length adjustment allows the luggage compartment seats to have enough leg space, at least for children - for adults, there is enough rear headroom, but walking is awkward and sitting comfort is poor.

You can get extra space by leaving the rear benches out of the way. Photo: Pekka Virtanen

The separate center seats have so much legroom that it can be afforded to hand over to the rear passengers or luggage compartment. Photo: Pekka Virtanen

Practical luggage space can be increased by moving the center benches forward and pouring them horizontally. Photo: Pekka Virtanen

The front seats have good lateral support in both the backrest and the seat section.

As such, the seat part of the benches that look good is shaped longer than the edges in the middle, which weakens the thigh support.

The front seats have good lateral support, but the seat cushion does not provide enough thigh support. Photo: Pekka Virtanen

The 5008 and 3008 have been given Peugeot’s current-style frameless front grille and saber-toothed LED spotlights, which also function as turn signals.

With the latter technology, the fog lights have been replaced by the “Foggy Mode” function of the headlights, which dims the encounter lights when the rear fog lights are activated.

A good detail is that the LED taillights, which have a transparent smoked glass surface, also light up in the spotlight position.

Contrary to the current trend, the 5008 power line options do not include any hybrid technology.

The only manual transmission option is the starting price model, which costs 32,217 euros.

This is a 1.2-liter, three-cylinder 130-horsepower gasoline engine.

Other models have an 8-speed automatic transmission with a new drive mode selector next to the operating lever: in addition to the normal and sport driving modes, there is now also an eco driving mode.

The diesel power options are 130 and 177 horsepower.

The Peugeot 3008 is now also available as a charging hybrid

The redesigned 3008 differs from the 5008 in terms of power line options, as there are two hybrid options for the shorter SUV model.

In addition to the 130-horsepower petrol and diesel engines in the Peugeot 5008, the 3008 is available as a two- and four-wheel-drive charging hybrid.

The front electric motor increases the total power of the front drive to 224 horsepower.

When a rear electric motor of equivalent power is connected, 299 horsepower can be read.