The newsletter lists the 50 most “dangerous” companies in the world: familiar names at the forefront

Experienced financial journalists list the 50 most dangerous companies in the world in their new book. According to them, the power of some companies has become too great. 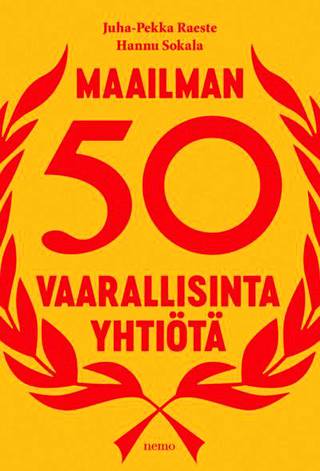 This is what Juha-Pekka Raeste and Hannu Sokala say in the new book The 50 Most Dangerous Companies in the World (Otava).

The danger of companies is related, among other things, to how much power they have.

The authors say that in many industries, the logic of free competition, combined with big-money policies and the development of information technology, has led to the power of some companies becoming too great.

They express an interest in the dangers associated with legitimate business activity and the normal functioning of the economy.

The most dangerous of the companies, according to the authors, is the search service Google, which collects huge amounts of information about its users.

In July 2020, more than 92 percent of all online searches in the world were conducted through it.

The actions and morals of both have been questioned.

Chinese Tencent owns the WeChat service, which actually combines the features of all U.S. giants.

It can pay, buy, follow the news and keep in touch with friends.

The struggle between China and the United States for world power is waged through and between companies.

Complicating matters is the fact that, for example, Google can bow to both Washington and Beijing.

Among the five most dangerous companies is only one representing the more traditional industries: the huge oil company Saudi-Aramco.

It and, in practice, Saudi Arabia is ruled by Crown Prince Mohammed bin Salman.

He has shown his ambition and cruelty.

Tencent products can be used to make any kind of message exchange online. Photo: Richard A. Brooks / AFP / Magazine

The company is an e-commerce and cloud services filed. Image: LUCAS JACKSON / REUTERS

Facebook has made Mark Zuckerberg one of the most influential people in the world. Photo: Erin Scott / Reuters

It is a matter of taste whether it is a good thing or a bad thing that no Finnish company has been included in the list of the most dangerous in the world.

They can be found in the immediate neighbors.

Its subcontractors have been accused of using both child and prison labor.

The youthful Nazi sympathies of the company's founder Ingvar Kamprad are also reviewed.

Ikea's basic idea is that the customer assembles his furniture himself.

Many people who are tired of Ikea furniture may think that this is the most dangerous feature of the company.

A couple of companies from Russia are involved.

According to the book, Vladimir Putin drew attention to the importance of the energy sector to his country even before his rise to power.

Immediately afterwards, she placed her own husband in charge of Gazprom.

The company is important to Russia in terms of both the economy and the power games.

Gazprom's gas pipeline is being built in the Baltic Sea.

The company is financially and politically important to Russia. Photo: Vitaly Nevar / Reuters

Disney has come a long way from mere Aku Ducks and Mickey Mice.

Disney has power over the mind

Obvious names such as Goldman Sachs, the scapegoat for the financial crisis, and Koch Industries, accused of political influence in the United States, have made the list.

However, their power seems to be diminishing alongside some giants dictating their own rules.

The obvious candidate is also the Academii, which provides military services, including mercenaries.

Among them is Walt Disney Corporation, which mentions the term “Disney fascism”.

As early as the 1970s, the company was accused of spreading the American way of life around the world.

This did not stop the fast-growing entertainment giant from later acquisitions.

However, according to the book, Disney’s problem is crystallized in the fact that “basically Disney’s power is power in our consciousness”.

Not all of the 50 companies presented in the book will open, which is particularly dangerous in them.

As a precaution, experienced financial journalists Raeste and Sokala state in the preface that they have made their choices as journalists and not as researchers.

They are not “based on anything”.

No traditional media company, such as Rupert Murdoch’s News Corp., which has great political influence in several countries, has been included in the ranks.

From the old colonial power to the new?

In addition to the power of individual companies, the book outlines broader developments.

The growth of corporate power is said to have actually begun with the trading companies of East India in England and the Netherlands hundreds of years ago.

Now the development has revolved around the full circle.

The book estimates that Western countries have voluntarily and “without further consideration” found themselves in a situation where they are buying everything the motherland wants to export.

The mainland has only changed to China.

According to the newsletter, the 50 most dangerous companies in the world: