Anton Lundell shone in the World Under-20 World Championships, which ended on Wednesday. Excerpts were also considered in North America. 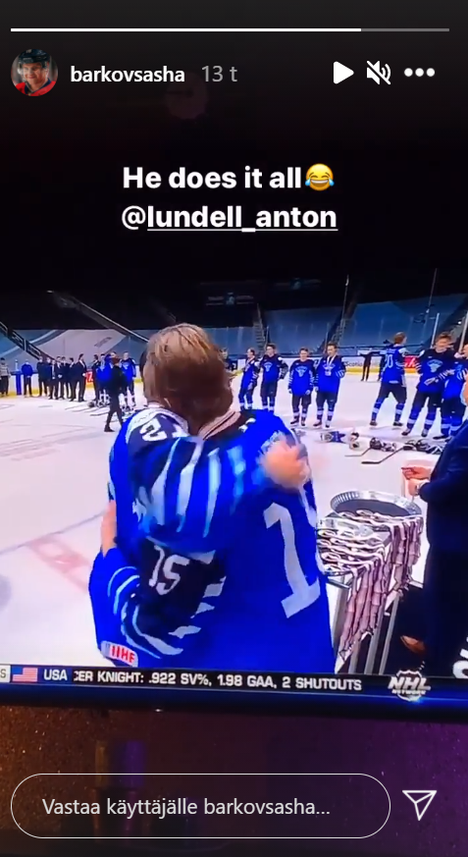 The Finnish national hockey team under the age of 20 got to celebrate the World Championship bronze medal in Finnish time early Wednesday, when it bell Russia 4–1.

The bronze medal was the Young Lions' first since 2006.

The winner of the victory was Captain Anton Lundell, who was hit by two hits and whose grips garnered praise throughout the tournament.

The 19-year-old center continued his contracting even at the awards ceremony, where he struck medals around the neck of his teammates.

Lundell's diligence did not go unnoticed by NHL Finnish star Aleksander Barkov, who broke the exhausting obsession with the super promise in the stories section of Instagram.

Barkov skipped the Florida Panthers, who booked Lundell in the fall for the first round of the NHL booking event.

- He takes care of everything, the Tampere resident wrote a video about the awards ceremony, accompanied by laughter.

Barkov, 25, is on the trail of his humorous throw.

Lundell consistently stood out at crucial moments and scored a whopping 10 (6 + 4) power points in seven matches.

- That's our son, the update was carved.

Lundell is reportedly playing in the HIFK shirt for the rest of the season.

In the second year, Kaapo Kakko, who won the World Cup gold under the age of 20, was able to acknowledge Finland's achievement to his teammate Pavel Buchnevich.

The Russian striker, who also represents the New York Rangers, shared a picture in his own Instagram stories, while Finland-Russia was still 0-0.

He had subscribed to Kakon and written the concise text “see you soon”.

Kakko shared the update a few hours later in his own stories.

He added handshake and wallet smileys below the picture.

So one could conclude that the 19-year-old Finn had bet on the outcome of the match with Buchnevich - and won.

The NHL season kicks off next Wednesday, January 13th.

Kakko could still have played for his age at this year’s U20, but the Rangers denied him entry into the tournament.